President admits decision is theirs, abandons threat to use his ‘absolute authority’ 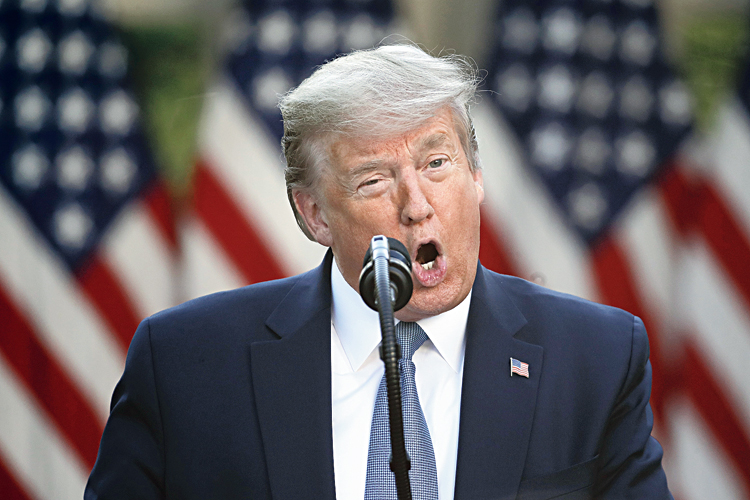 President Trump told the nation’s governors on Thursday that they could begin re-opening businesses, restaurants and other elements of daily life by May 1 or earlier if they wanted to, but abandoned his threat to use what he had claimed was his absolute authority to impose his will on them.

On a day when the nation’s death toll from the coronavirus increased by more than 2,000 for a total over 30,000, the president released a set of nonbinding guidelines that envisioned a slow return to work and school over weeks or months.

Based on each state’s conditions, the guidelines in effect guarantee that any restoration of American society will take place on a patchwork basis rather than on a one-size-fits-all prescription from Washington that some of the governors had feared in recent days.

“We are not opening all at once, but one careful step at a time,” Trump told reporters during a briefing at the White House.

Trump essentially gave cover to mainly Republican governors of states in the South and West that have not been as hard hit by the pandemic to begin reopening sooner.

The President, who has previously said that as many as 29 states could reopen soon, told governors on a conference call before his announcement that some of them were “in very, very good shape” and could move further and faster to resuming economic and social activities.

If they follow the guidelines, New York and other states in the Northeast, as well as states in the Midwest and West, that have seen large outbreaks would remain shuttered for weeks until new cases of the virus and death tolls fall and hospital capacity is restored.

The guidelines envision proceeding without the comprehensive testing programme that many public health experts have sought and opened the President to criticism that in his eagerness to start rebuilding a cratered economy, he may have encouraged some states to move too quickly and leave themselves exposed to a second wave of the coronavirus.

Speaker Nancy Pelosi dismissed the guidelines even as she pushed for more testing. “The White House’s vague and inconsistent document does nothing to make up for the president’s failure to listen to the scientists and produce and distribute national rapid testing,” she said in a statement.

The 18-page document released by the White House provided mostly general guidance and did not confront some difficult questions, including how to finance the billions of dollars necessary for expanded testing; whether travel should be restricted between states; when the ban on international travel from Europe and elsewhere would be lifted; and how the states should deal with future shortages of protective equipment if the virus resurged in autumn.

The guidelines assume the ability to quickly contain future outbreaks by quarantining sick people and their contacts.

“You’re going to call your own shots,” Trump told the governors, according to an audio recording provided to The New York Times.

“You’re going to be calling the shots. We’ll be standing right alongside of you, and we’re going to get our country open and get it working. People want to get working.”

At the evening briefing, the President conceded that the choice of how and when to reopen the country would not be his. “If they need to remain closed,” he said, “we will allow them to do that.”

Trump’s choice of words amounted to a significant reversal only three days after he insisted that “the President of the United States calls the shots” and that he had the “total” authority to decide how and when the country would end widespread lockdowns.

Several governors rebelled at the notion, defying Trump’s assertion of unilateral power and declaring that they would come to their own conclusions.

The President said a little more than three weeks ago that he wanted to reopen the country by Easter, April 12, then changed the date to May 1 before declaring that when to do it would be “the biggest decision I’ve ever had to make.”