How a tiny nation is helping fight pandemic

Cuba in the forefront, sends doctors to Italy 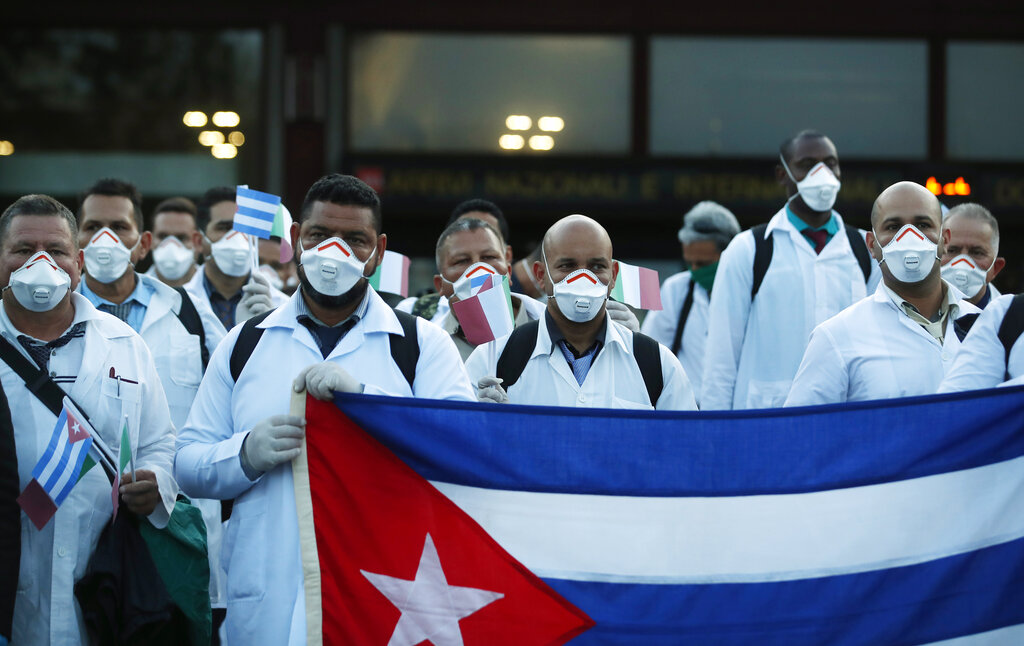 Cuba has been sending its 'armies of white robes' to disaster sites around the world, largely in poor countries since its 1959 revolution. Its doctors were in the front lines in the fight against cholera in Haiti and against Ebola in West Africa in the 2010s. But that’s not all, Cuba has one of the world’s most effective and unique primary health care systems. Cuban health authorities give large credit for the country’s impressive health indicators to the preventive, primary-care emphasis pursued for the last four decades. These indicators – which are close or equal to those in developed countries – speak for themselves. For example, in 2004, there were seven deaths for every 1000 children aged less than five years – a decrease from 46 such deaths 40 years earlier. Meanwhile Cubans have one of the world’s highest life expectancies of 77 years.

The country is also known for its preparedness to tackle disasters and emergencies like the present epidemic. Cuba has till date 25 registered cases of Covid-19. Doctors, nurses, along with medical staff and students have been visiting communities door-to-door to check the spread of the disease.

When it comes to treating Covid-19 patients too, Cuba has been the torchbearer. It has produced one of the most potent medicines for the treatment of immunological diseases. TheRecombinant Interferon Alpha 2B (IFNrec), an antiviral produced by the Cuban biotech industry, is being used by Chinese doctors to treat patients infected by the 2019-nCoV coronavirus.

Cuba sent a group of doctors and nurses to Italy for the first time last weekend to help in the fight against the novel coronavirus. A group of 53 doctors and paramedics arrived in Italy on 22 March, to aid in arresting the spread of the deadly disease.

This came at the behest of a request made on part of the worst-affected region in Italy, Lombardy. Italy is one of the hardest hit countries in the world, with a death toll that rose to 6,077 on Tuesday, according to its head of welfare, Giulio Gallera. Gallera is the person who put in the request for Cuban doctors.

This is the sixth medical aid team Cuba has dispatched recently abroad to combat the disease. Teams have been sent to Venezuela, Nicaragua, Jamaica, Suriname and Grenada.

It seems that this tiny Caribbean island nation is at the forefront of combating a global crisis now. There are several reasons why doctors from an otherwise developing country have been requested in Italy, a member of the wealthy “Group of Seven” (G7) industrialised nations.

In a time when humanity is being put to test for benevolence, Cuba has proven that human endeavour and will triumphs in the face of all odds.¡Hasta la victoria siempre, Cuba!

Humanitarian approach to an epidemic

As the world deals with the Covid-19 pandemic, it should be noted that Cuba has adopted by far the most humanitarian and cooperative approaches in dealing with the contagion. Last week it allowed a British cruise ship that had been turned away by several Caribbean ports to dock on the island and for enabling the evacuation of the more than 600 passengers onboard.

Yet Cuba deals with several exigencies, namely the lack of availability of medicines, largely due to the ban on sanctions imposed by the USA. Still, it has one of the highest ratios worldwide of physicians per, excluding doctors abroad.

Tourists from Mexico wearing masks as a precaution against the spread of the new coronavirus, wait for their flight home, at the Jose Marti International Airport in Havana, Cuba, Monday, March 23, 2020. The vast majority of people recover from the COVID-19 disease.
(AP Photo/Ramon Espinosa)

A student wearing a mask as a precaution against the spread of the new coronavirus waits at the school gate to be picked up by his father at the end of the school day in Havana, Cuba, Friday, March 20, 2020.
(AP Photo/Ramon Espinosa)

A woman wearing a mask as a precaution against the spread of the new coronavirus walks on the sidewalk as a tourist, double decker bus passes by in Havana, Cuba, Friday, March 20, 2020.
(AP Photo/Ramon Espinosa)
Italy Cuba Coronavirus Novel Coronavirus (nCoV) Covid-19
Share
Advertisement
Advertisement