Advertisement
Home / World / As tourism plummets in Thailand, elephants are out of work, too

As tourism plummets in Thailand, elephants are out of work, too 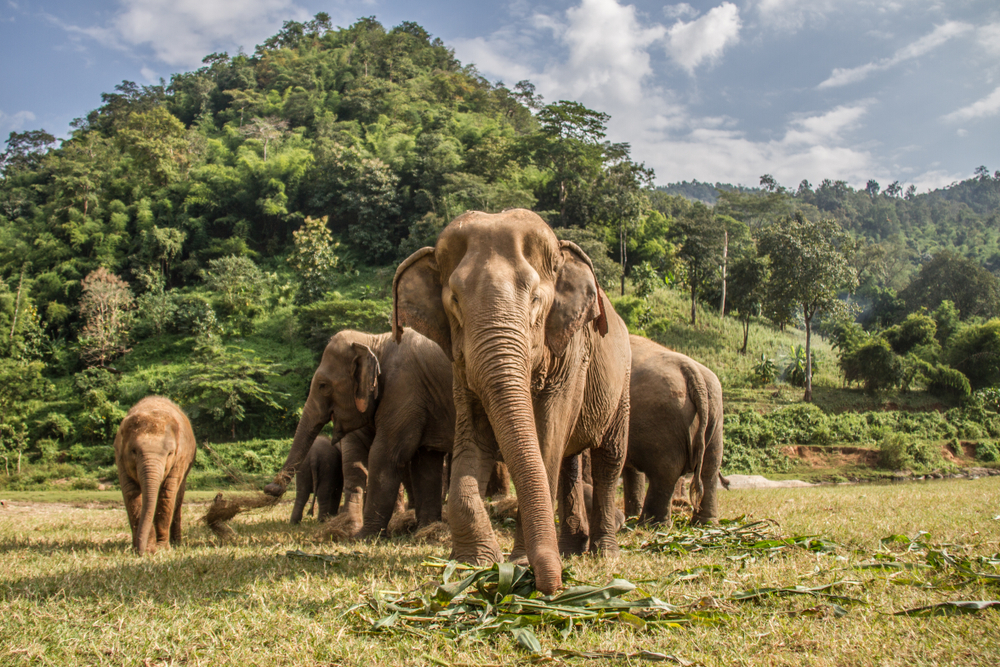 More than a decade ago, it was common for elephant owners to take their animals into Thailand’s cities and beg in the streets. Other elephants were put to work by illegal loggers along the border with Myanmar to harvest timber and haul it out of the forest.

Gradually, Thailand succeeded in reducing such practices and improving the lives of domesticated elephants. But now, the coronavirus that is sickening humans around the world may threaten to undo that progress.

A sudden drop in foreign tourists has forced the closing of dozens of elephant parks and similar tourist attractions, putting more than 1,000 elephants in Thailand out of work and endangering their futures, operators of the attractions said.

In recent years, the main concern that animal welfare advocates have raised about Thailand’s many elephant attractions has been whether it is abusive for tourists to ride the creatures.

But for many owners, just keeping them fed is now a more urgent concern. Feeding an elephant can cost as much as $40 a day — more than three times the minimum daily wage in Thailand. 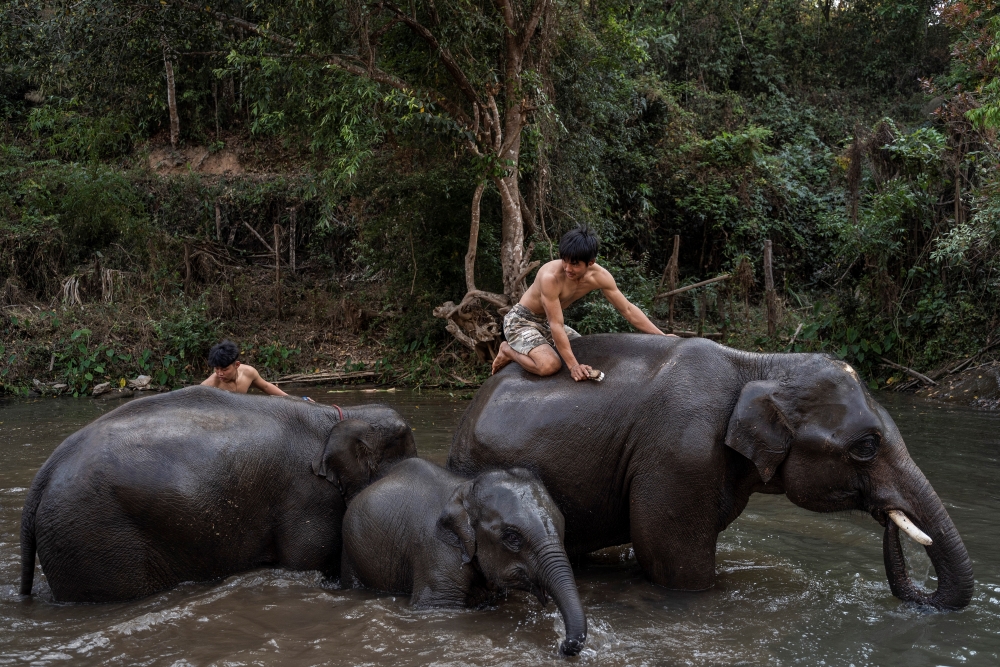 Elephants are bathed by their handlers, known as mahouts, in Baan Thung Luang, Thailand, on March 22, 2020. These three, owned by Amnuai Charornsuksombat, were taken back to his village because of the dwindling number of tourists at the parks where they worked.
Adam Dean/The New York Times

Theerapat Trungprakan, president of the Thai Elephant Alliance Association, a group of elephant attraction operators, said he feared that unless the government intervened, some elephants would be forced back onto the streets or even into illegal logging operations.

“We don’t want that loop of survival alternatives to come back,” Theerapat said. “It will endanger the welfare of the elephants, such as having the elephants roaming the streets begging for bananas or sugar cane.”

Thailand, which as of Tuesday had reported 827 coronavirus cases and four deaths, has sought to stop the spread of the virus by closing schools and entertainment venues and by encouraging people to stay home.

The initial outbreak in China led to a sudden drop in visitors to Thailand, as both countries restricted travel. In 2019, China contributed more than a quarter of Thailand’s 40 million tourists.

In February, overall tourist arrivals in Thailand were down by 44% compared with a year earlier. Tourism has plunged even further in March with new limits on travel and activity. 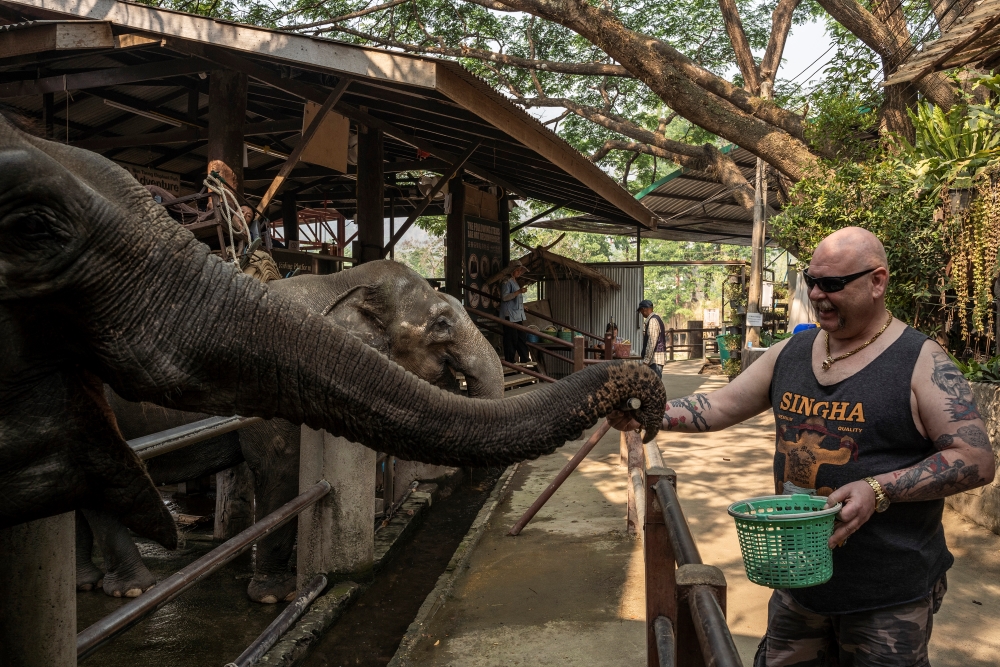 A German visitor offers an elephant a snack of bananas and sugar cane at Maetaeng Elephant Park, north of the city of Chiang Mai, Thailand, on March 22, 2020. With the coronavirus pandemic keeping visitors away, elephant parks are closing, and the industry fears the animals could be forced back into illegal logging or begging on city streets.
Adam Dean/The New York Times

Tourism is a huge part of the Thai economy. Before the virus struck, travel and tourism accounted for more than 20% of the country’s gross domestic product and employed nearly 16% of the workforce.

The effects have been felt nationwide. Hotel rooms are vacant and taxis idle. Major events have been postponed or canceled, including the Thai New Year festivals normally held in April as well as the first WBC Muay Thai World Convention, which had been scheduled for this month in Bangkok.

The elephant attractions have been hit hard, operators say.

In northern Thailand, 85 such businesses have temporarily halted operations because of a lack of visitors, said Borpit Chailert, general manager of Maetaeng Elephant Park, north of the city of Chiang Mai.

He said the Maetaeng park, one of the country’s larger operations, was still open, but visitors were down by 90%, forcing the company to reduce employees’ hours. The park used to get as many as 1,000 visitors a day. On Saturday, there were only four.

“They cannot look for food in the forest because they are used to being fed,” Borpit said. “Imagine if we released around 3,000 domesticated elephants into the forest at the same time. There would be no food to feed all the elephants.” 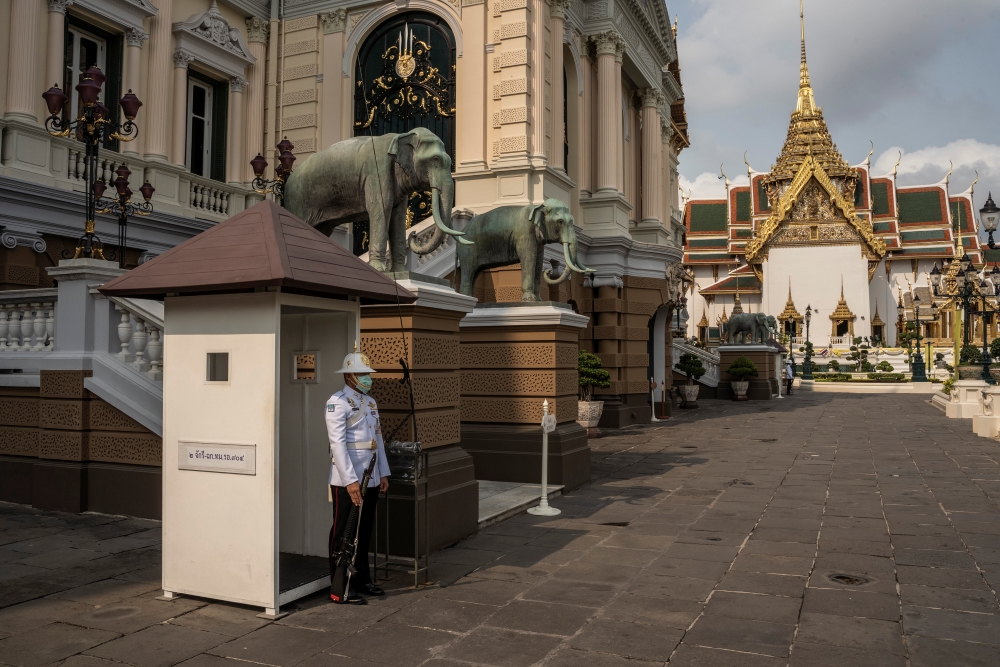 The Grand Palace in Bangkok, Thailand, which like many other Thai tourist sites, has seen visitor numbers collapse because of the coronavirus pandemic, on March 17, 2020.
Adam Dean/The New York Times

Elephants are Thailand’s national symbol. Some were used in logging operations for generations before 1989, when Thailand, facing the rapid destruction of its forests, banned nearly all commercial logging.

More recently, many captive elephants have been put to work in tourist attractions, often in small operations with a dozen or so animals, where visitors can ride them. Some larger venues also offer elephant rides.

Animal welfare advocates say the training and treatment of elephants in such operations are often abusive, and they call for an end to using the animals in circuses or letting tourists ride them. They say it is better for tourists simply to observe the animals in refuges and sanctuaries, which are a growing part of the business.

A group that promotes the welfare of elephants in Thailand, the Friends of the Asian Elephant Foundation, has long urged the government to establish a fund for this kind of tourism emergency.

“This funding is important because with no income, where will the elephant owners and park owners get the money to buy food for the elephants?” said the group’s co-founder and secretary-general, Soraida Salwala. “I am very worried about this situation.”

Theerapat, the Thai Elephant Alliance Association president, said most of the elephants in Thailand’s attractions were rented from their owners. If the parks return them, he said, some owners might decide they have no choice but to beg on the streets.

Or some elephants could be forced to haul timber along the borders with Myanmar and Laos, where they would risk stepping on land mines left from conflicts in the region, he said.

“These elephants have to live in a risky area,” Theerapat said. “When they go back, in some areas there is still illegal logging. And when the elephant owner’s savings are depleted, he might think that is a way out.” 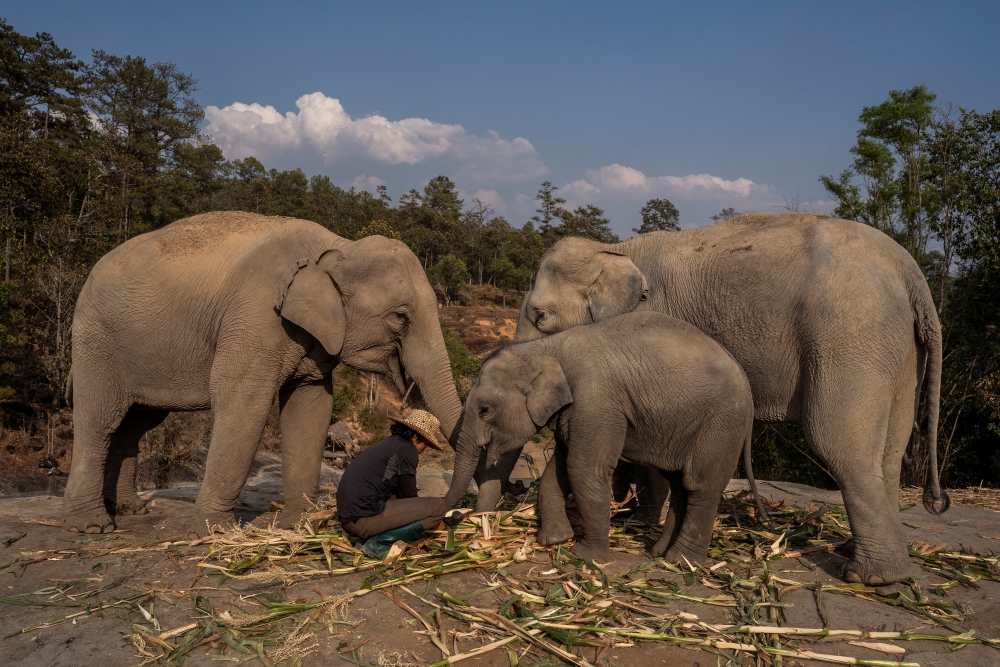 Amnuai Charornsuksombat, 36, feeds his elephants after he had to return them to his village due to dwindling tourists at the parks where they worked, in Baan Thung Luang, Thailand on March 22, 2020. With the coronavirus pandemic keeping visitors away, elephant parks are closing, and the industry fears the animals could be forced back into illegal logging or begging on city streets.
Adam Dean/The New York Times

The effect of long-term closings on the elephants’ welfare is also a concern, he said.

“For a hotel, if the number of visitors declines, you can close down eight floors and have the guard walk his rounds with his flashlight,” he said. “Car rental’s the same. You can just put the cars in the garage.

“But not with elephant parks,” he said. “If there are no visitors and no income, we still have to feed and take care of the elephants.”

One owner, Amnuai Charornsuksombat, 36, whose family has kept elephants for generations, said he retrieved five of the animals last week from a tourist attraction where they had been working.

The family had rented elephants for 16 years to the small park, which is about a two-hour drive north of Chiang Mai. He and the elephants’ handlers, known as mahouts, rode the animals home to the village, about an hour’s trip.

“This is the first time I have had to bring the elephants home from the park with no clear time frame when they are going back because there are no tourists,” he said.

Now, in their remote village of Baan Thung Luang, he is struggling to keep them fed and to pay the mahouts — one for each elephant — to care for them.

The elephants no longer get sugar cane and bananas, which are too expensive, but forage for grass in nearby fields and eat corn stalks that Amnuai buys from farmers.

“Everybody is in a difficult situation,” he said.

But no matter how hard it gets, Amnuai said, it would never occur to him to take his elephants and go begging.

“For us, elephants are family members,” he said. “They are not pets. To bring them to do that would be a disgrace. They are family, so we will get through this together. Family takes care of each other.”