Block of ice falls from another plane flying 1,000 feet above the jet 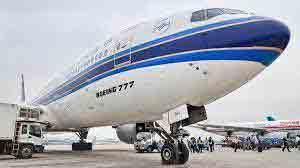 A British Airways aircraft carrying around 200 holiday travellers from London survived a mid-air scare after a lump of ice from a jet 1,000 feet above it smashed into the plane at 35,000 feet that left its windscreen cracked, according to a media report.

The Boeing 777 aircraft cruising at 35,000 feet was making the journey from London Gatwick to San Jose in Costa Rica on Christmas Day when the freak accident took place.

The block of ice fell from another plane that was flying 1,000 feet above the jet while it was cruising at 35,000 feet. It completely cracked up the two-inch-thick windscreen, which is built to withstand extreme force and is similar to bulletproof glass.

The aircraft landed safely at San Jose. The incident has been described as a “one-in-a-million” chance and left some 200 passengers stranded over Christmas instead of being able to make it back to London.

“My husband is part-Icelandic and his family who live in Edinburgh celebrate Christmas on 24 December. We were desperately trying to find a connecting flight at this point that would get us there in time to not miss his family Christmas,” Jo Mitchell told The Independent newspaper.

Mitchell and Geir Olafsson had been on honeymoon in Costa Rica, and set off from their Pacific coast resort expecting to return via Gatwick to Edinburgh in time for a family Christmas.

“The BA app was saying something vague about the flight being delayed to the next day. The flight time, however, only showed a four-hour delay. We had received no information via email or message so we hoped it was just a glitch. We dropped our car and continued to the airport, desperately hoping it wasn’t true,” Mitchell said.

Despite the mid-air accident, all the passengers were safe but were stranded at an airport for several hours after their plane made an emergency landing.

The flight was rescheduled 50 hours after the passengers' original scheduled time.

“We were told when it was our turn to check-in by the San Jose desk staff that the plane had a broken windshield and it would be too dangerous to fly it back. At this point we were devastated – realising we would miss Christmas with both of our families,” Mitchell said.

Following the incident, British Airways issued an apology to the passengers who had their Christmas Day plans ruined.

“We will never fly an aircraft unless we feel it is completely safe to do so, and on this occasion, our engineers were unable to clear it to fly. Since then, our teams have been working behind the scenes to do all they can to ensure an aircraft is ready at the earliest opportunity to bring customers to London,” the official said.

“We appreciate the patience and the understanding of our customers and our engineers and crew colleagues who have also done all they can to assist,” the report quoted the official as saying.

British Airways has offered a full refund to all the affected passengers, and will also pay the 520 pounds per person stipulated for long delays under air passengers' rights rules, the report said.