Beijing vows to retaliate; Closure made in response to ‘violations of US sovereignty’ 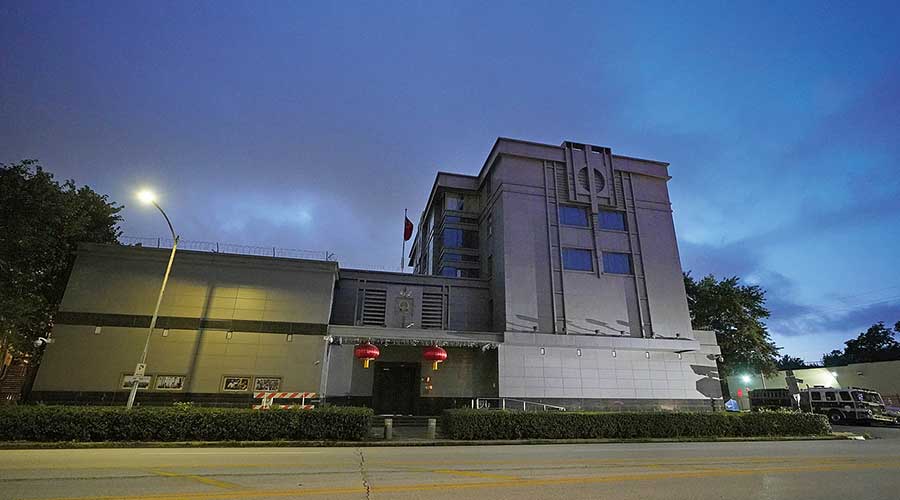 The US ordered China to close its diplomatic consulate in Houston within 72 hours, dealing another blow to the rapidly deteriorating relations between the two countries. China promptly vowed to retaliate, calling the move illegal.

The state department said the closure was made in response to repeated Chinese violations of American sovereignty, including “massive illegal spying and influence operations”.

The Trump administration’s decision, an unusual and grave step, was a significant escalation of its effort to tighten the reins on Chinese diplomats, journalists, scholars and others in the US. It comes amid rising tensions that were inflamed by the coronavirus pandemic but that now touch on virtually all aspects of the relationship.

The administration is also considering a travel ban for members of the Communist Party and their families. Such a move, if enacted, could affect 270 million people, and it has been widely criticised as too sweeping to be practical.

The state department spokeswoman, Morgan Ortagus, said the order to close the consulate showed that the US would not tolerate China’s “egregious behaviour”.

“The People’s Republic of China has engaged for years in massive illegal spying and influence operations throughout the United States against US government officials and American citizens,” Ortagus said in a pointed and politically tinged statement.

The move, she said, would “protect American intellectual property and Americans’ private information”.

She did not elaborate, but the administration has repeatedly accused China of various attempts to steal commercial and military secrets, allegations that Beijing has rejected. The justice department said on Tuesday that an indictment had been secured against two Chinese hackers whom officials have accused of trying to steal information about coronavirus vaccine research.

Wang Wenbin, a spokesman for the Chinese ministry of foreign affairs, urged the US to reverse the decision immediately.

“Otherwise China will certainly make legitimate and necessary reactions,” he said. His remarks suggested that China would, at a minimum, close a US Consulate in China.

In the hours after the Trump administration notified the Chinese of its decision on Tuesday, smoke was seen billowing from a courtyard inside the consulate in Houston as employees dumped what appeared to be documents into flaming barrels, according to a video posted by KPRC-TV, a local television station.

In Beijing, Wang called the move unprecedented and illegal under international law, and described it as the latest in a series of aggressions.

“For some time, the United States government has been shifting the blame to China with stigmatisation and unwarranted attacks against China’s social system, harassing Chinese diplomatic and consular staff in America, intimidating and interrogating Chinese students and confiscating their personal electrical devices, even detaining them without cause,” he said.

Cheng Xiaohe, an associate professor at the School of International Studies at Renmin University in Beijing, said the US had never taken such a bold and divisive step since the two countries established diplomatic relations on January 1, 1979.