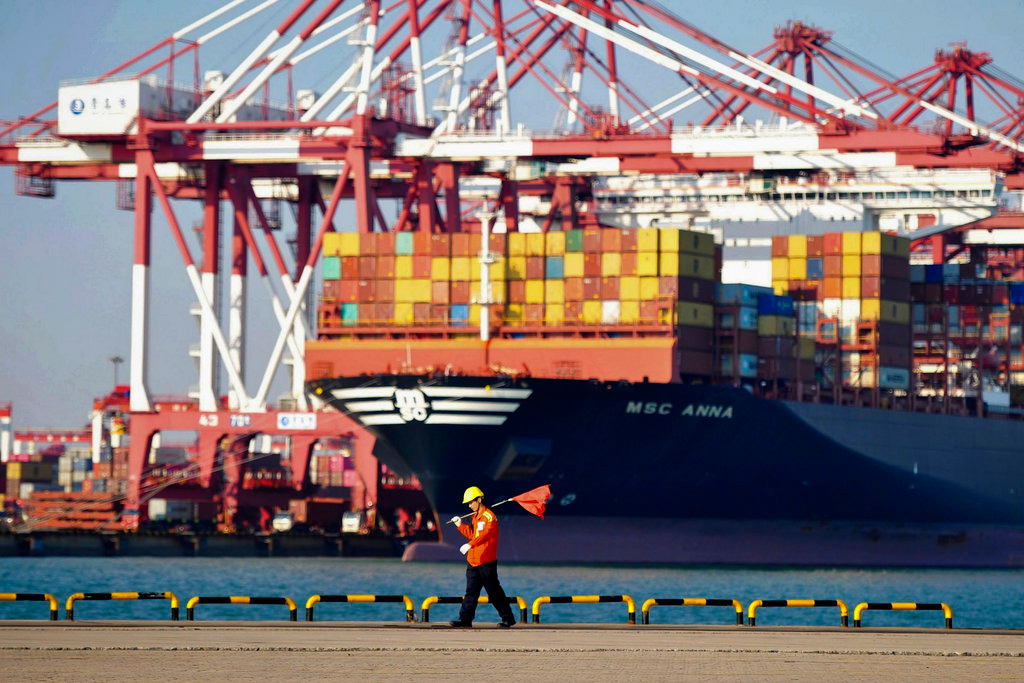 China’s economic growth sank to its lowest quarterly level since the 2008-09 global financial crisis, and finance officials launched a media blitz on Friday to shore up confidence in its sagging stock market.

Growth in the quarter that ended in September slipped to 6.5 per cent over a year earlier from the previous quarter's 6.7 per cent, official data showed. It was the slowest rate since early 2009.

The world's second-largest economy already was cooling before a tariff war between Beijing and President Donald Trump erupted.

Beijing tightened controls on lending last year to rein in a debt boom. That has weighed on housing sales and consumer spending. Car buyers are steering clear of dealerships.

Credit controls and trade tensions are 'taking a bite out of economic momentum,' said Bill Adams of PNC Financial Services Group in a report.

The impact of Trump's penalty tariffs of up to 25 per cent on Chinese goods in a dispute over Beijing's technology policy has been limited. But with the rest of their $12 trillion-a-year economy slowing, the communist leaderships has reversed course and ordered banks to lend.

Officials led by China's economic czar, Vice-Premier Liu He, tried Friday to reassure investors about a stock market that has sagged 30 per cent since January.

The decline is 'creating good investment opportunities,' Liu said in comments carried by the official Xinhua News Agency and business newspapers and websites.

The benchmark Shanghai Composite Index ended the day up 2.6 per cent.

The government also said insurers will be allowed to create products to help stabilize the market by reducing 'liquidity risk.' That refers to fears lenders that accepted stock as collateral for loans might sell, flooding the market and driving a new price collapse.

Retail sales, factory output and investment in factories and equipment — bigger drivers of growth than exports — all weakened in the latest quarter.

The conflict with Washington has prompted Chinese leaders to step up a marathon effort to encourage self-sustaining growth driven by domestic consumption and reduce reliance on exports and investment.

Beijing has cut tariffs, promised to lift curbs on foreign ownership of auto producers and taken other steps to rev up growth.

But leaders have refused to scrap plans such as 'Made in China 2025,' which calls for state-led creation of Chinese champions in robotics and other technologies.

The United States, Europe and other trading partners say those violate Beijing's market-opening commitments. But Chinese leaders see them as a path to prosperity and global influence.

Regulators have ordered banks to step up lending, especially to entrepreneurs who create most of China's new jobs and wealth. Forecasters say it will take time for results to show.

Government support is 'starting to gain traction,' but more will be needed to stabilize growth, Julian Evans-Pritchard of Capital Economics said in a report.

Washington has raised tariffs on $250 billion of Chinese goods and Trump says he might extend penalties to almost all imports from China. Beijing responded with its own tariff hikes on $110 billion of American imports. But it is running out of goods for retaliation due to their lopsided trade balance.

Forecasters say that if all the tariff hikes both sides have threatened are imposed, that could cut China's 2019 growth by up to 0.3 percentage points.

The Trump administration argues that China has more to lose in a trade war — and will face pressure to reach a truce because it exports more than it buys from the United States and because its economy is decelerating while the U.S. economy looks strong.

But Claude Barfield, scholar at the conservative American Enterprise Institute, noted that China's growth rate 'doesn't seem to be anything close to a crisis.'

Exports to the United States rose 13 per cent in September despite the tariff hikes, down slightly from August's 13.4 per cent, helping push China's politically volatile trade surplus with the United States to a record $34.1 billion.

Exporters of clothes and other lower-value goods say American orders began falling in April as trade tensions worsened. But makers of less price-sensitive exports such as factory equipment and medical technology are confident they can keep their market share.

Trade has shrunk as a share of the economy but still supports millions of jobs.

The government is promising to help struggling exporters.

'In general, the impact is limited,' a Commerce Ministry spokesman, Gao Feng, said Friday. 'Governments at all levels will also take active measures to help enterprises and employees cope with possible difficulties.'

A man loads electronic goods into his tricycle carts on a street in Beijing on Friday.
AP
China Growth
Share
Advertisement
Advertisement