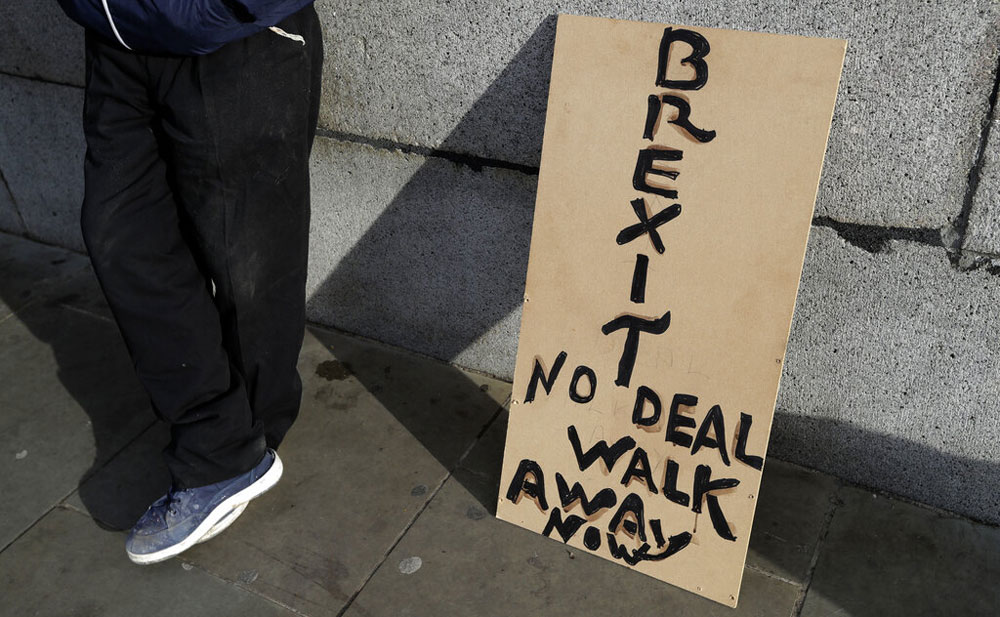 The Bank of England has said that in a worst-case scenario, a cliff-edge Brexit could trigger a deep recession, with Britain's economy shrinking 8 per cent within months as unemployment and inflation soar
(AP)
AP   |   London   |   Published 23.01.19, 06:53 PM

Businesses in Britain and the European Union need to prepare for the possibility the UK will leave the bloc in March without an exit deal, senior British and EU officials warned on Wednesday, as a growing number of UK firms braced for disruption by stockpiling goods or shifting operations overseas.

'We know that the law in the United Kingdom says that on the 29th of March the European treaties will cease to apply to a UK, so the only way we can stop that happening is to come to an agreement,' Fox told the BBC from the World Economic Forum in Davos, Switzerland.

In Brussels, the EU's chief Brexit negotiator, Michel Barnier, said 'preparing for a no-deal scenario is more important than ever — even though I still hope that we can avoid this issue and this scenario.'

Most UK business groups fear a 'no-deal' Brexit will cause economic chaos by ripping up the trade rulebook and imposing tariffs, customs checks and other barriers between the UK and the EU, its biggest trading partner.

The Bank of England has said that in a worst-case scenario, a cliff-edge Brexit could trigger a deep recession, with Britain's economy shrinking 8 percent within months as unemployment and inflation soar.

Carolyn Fairbairn of the Confederation of British Industry said British politicians must rule out a no-deal Brexit, calling it 'the only way to halt irreversible damage and restore business confidence.'

Warnings from industry have grown louder as Brexit day approaches. Airbus chief executive Tom Enders said earlier this month that uncertainty around the terms of Britain's exit was 'unbearable.'

Speaking at a business reception, he urged lawmakers to 'stop filibustering around this issue, allow for an orderly, agreed Brexit and find an agreement with Brussels.'

So far, he has not been heeded. Britain's fractured Parliament is due to vote on May's proposal on Tuesday — and on rival plans, including attempts by groups of legislators to delay Britain's exit and to rule out 'no-deal.'

May's government has rejected both ideas, but a growing number of lawmakers believe Britain will have to ask the EU to delay Brexit past March 29 to solve the Brexit impasse.

German Economy Minister Peter Altmaier said any such request 'would certainly be considered seriously' by the bloc.

''No-deal' Brexit must be avoided — this is the priority,' he said in Davos, Switzerland.

May said extending the deadline 'does not solve the issue,' and the only way to ensure Britain did not leave the EU without an agreement was for Parliament to pass her deal.

'There will always be a point of decision ... no deal, a deal or no Brexit,' she said in the House of Commons.

Britain's pro-Brexit lawmakers accuse those seeking a delay of trying to overturn voters' 2016 decision to leave the EU.

'They are going to do everything that they can in that remaining time not to delay Brexit, not to get a deal, but to keep us bound to the European Union,' said Conservative legislator Jacob Rees-Mogg, a leading Brexiteer.

With Brexit just two months away, companies are acting to cushion themselves against disruption.

Ferry operator P&O said it would re-register its UK fleet under the flag of Cyprus so it could continue to use EU tax arrangements after Brexit.

Electronics firm Sony announced this week that it will move its European headquarters from London to Amsterdam to avoid potential customs complications after Britain leaves the EU — one of several companies shifting its legal base to an EU member state. Sony said it did not plan to move jobs from Britain.

While many firms worry about the impact of Brexit, some senior business figures support it, including James Dyson, founder and chairman of appliance manufacturer Dyson. The vacuum-maker was accused of hypocrisy by Brexit opponents after announcing Tuesday that it is moving its head office from southwest England to Singapore.

The firm said it was making the move because of the growing importance of the Asian market, rather than because of Britain's impending EU exit.

But Solicitor General Robert Buckland, who represents an area near Dyson's British HQ, said 'I'm disappointed to say the least that at this time a company led by a person who advocated Brexit has decided to relocate outside of this country.'