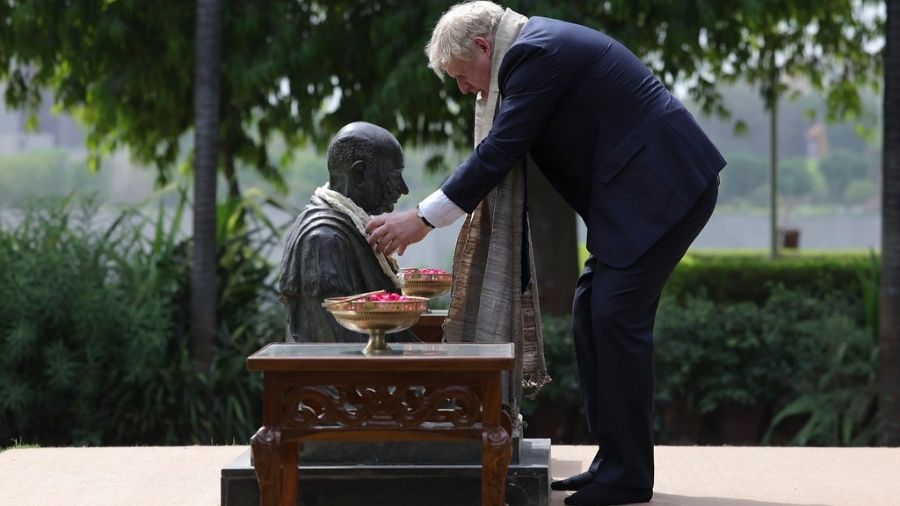 Visiting British Prime Minister Boris Johnson on Thursday termed Mahatma Gandhi an extraordinary man who mobilized the principles of truth and non-violence to change the world for better. Johnson became the first prime minister of the UK to visit the Sabarmati Ashram here, the place from where Gandhi led India's struggle for freedom from the British colonial rule for more than a decade.

In fact, the Tory politician is also the first British prime minister to visit Gujarat post 1947. "It is an immense privilege to come to the ashram of this extraordinary man, and to understand how he mobilized such simple principles of truth and non-violence to change the world for better," Johnson wrote in the visitors' book at the Gandhi ashram. While the British PM was effusive in his praise for the Mahatma, during the freedom struggle such praise for Gandhi from Britain's ruling class was rare.

Winston Churchill famously called Gandhi a "half- naked fakir" as the latter opposed sending Indian soldiers to fight for Britain in the Second World War and launched the Quit India movement in 1942. The Mahatma's call to use the charkha (spinning wheel) and boycott foreign goods including cloth hit the textile industry in Manchester. Charkha became a very potent symbol of the anti-colonial struggle.

During his visit, prime minister Johnson tried his hand at the charkha at Hriday Kunj, the hut where Gandhi lived. A replica of charkha was also presented to him. The Sabarmati Ashram Preservation and Memorial Trust also gifted two books to him.

One of the books was "Guide to London", an unpublished book which consists of Gandhi's suggestions on how to live in London. The other book was "The Spirit's Pilgrimage", autobiography of Mirabehn or Madeleine Slade, Gandhi's British-born follower. Johnson is scheduled to meet Prime Minister Narendra Modi in Delhi on Friday.

Boris not to 'lecture' India