Big Ben’s bongs to ring out again in London

Elizabeth Tower is back after five-year restoration 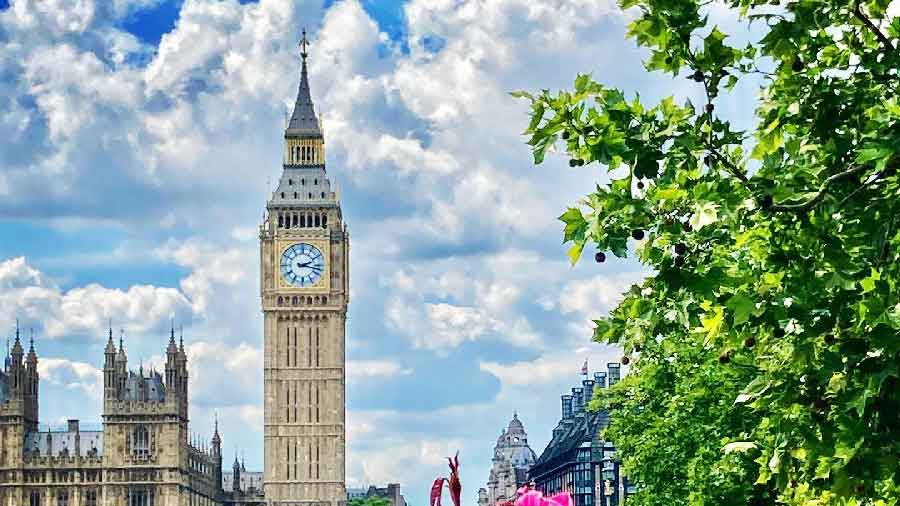 For five years, the most famous clock tower in Britain was hidden behind an ugly fortress of scaffolding, and its hourly bong was rendered mute. But the restoration work is done, and this summer, a sound familiar to Londoners for more than a century and a half will again ring out across the British capital — Big Ben is back. The clock tower — officially known as the Elizabeth Tower since 2012 when it was renamed in honour of the queen’s diamond jubilee — stands tall over the Palace of Westminster, which houses the British Parliament and is one of the world’s most instantly recognised constructions.

But it is the nickname of the biggest bell in the belfry that draws the most name recognition: Big Ben. During the past five years, the clock, which has four dials, was dismantled and serviced for the first time since it started ticking in 1859. More than 3,500 parts were removed from the 316-foot tower, including much of its iron roof.

“At the end of the day, you could say it is just a series of concentric stone shafts with a bloody great clock on top,” said Adam Watrobski, the chief architect of the tower’s restoration, which cost £80 million. “But it’s the symbolism, the size of the great clock of Westminster, that gives it its importance.”

Indeed, when Parliament is in session, there is a special illumination above the dials, which Watrobski said represented “the light of freedom and democracy”. Big Ben, he added, had come to symbolise “the sound of freedom and hope”, particularly during World War II. So important is Big Ben’s chime to the national psyche that special arrangements were made during the renovation for it to strike each year on Remembrance Day, to commemorate Britain’s war dead; and to usher in the New Year.

In January 2020, Brexit supporters fought in vain to return it to service to mark the country’s exit from the EU. The challenges of making that happen, though, become clear when climbing the confined, 334-step stairwell that winds up to the belfry.

Also evident: the quality of the renovation. Bright morning light shone in through the four restored clock faces — perched high above the Houses of Parliament — each with 324 pieces of pot opal glass produced in Germany. Newly refurbished golden orbs that decorate the tower’s stonework glinted in the sun.

The sheer size of Big Ben, weighing a little over 15 tons, is impressive, as is the intricacy of a clock mechanism based on the most advanced technology available to its 19th-century creators. It still loses no more than a second in accuracy a week.

The Elizabeth Tower is not the first clock tower to watch over Parliament — that one is thought to date from around 1290. In 1834, a fire destroyed the Palace of Westminster, leading to the construction of the modern-day building that is one of the most famous examples of Gothic Revival architecture in the world. And when the original clock tower was built, it was constructed with a rising scaffold, “so it rose as if by magic, it was noted at the time”, Watrobski said.

In May 1859, crowds lined the streets to greet Big Ben’s arrival. The enormous bell was pulled by 16 horses to Westminster, where it took 18 hours to haul it nearly 200 feet to the belfry before it could first ring out. Back then, the clock tower was the most advanced and ambitious public building of its age, but by 2017, stonework was deteriorating, water was leaking into the belfry, and the steps, ironwork and guttering were all in need of repair. There was even still damage dating from 1941 when Parliament was bombed during World War II.

“Like all historic buildings, you don’t really know until you peel off the skin what you are going to find underneath,” Watrobski said. “There was a considerable amount of damage to cast iron and to stonework.” The restoration work has gone a long way to modernising the Elizabeth Tower, which will re-open this year to tourists. But the improvements will benefit visitors and maintenance staff alike.

An elevator has been installed, as has a restroom at the top — the lack of which previously meant Big Ben’s maintenance workers had to trek down the 334 steps whenever they were in need of one. There is even now a spot for the staff to make tea. While Big Ben needs constant maintenance, the clock had never been fully serviced until this restoration. After it was dismantled, it was secreted away from London, more than 280 miles, to the workshop of the Cumbria Clock Company in northwestern England.

To help keep the work under wraps, the Cumbria Clock Company removed signs from its building to make it harder for uninvited visitors to find. When a group of walkers once peered through a window and asked if they were looking at the famous clock, they were told that they were instead viewing one from Manchester Town Hall.

“It was very important that what we were doing was kept secret,” said the company’s director, Keith Scobie-Youngs, who was worried that it might attract thieves or vandals as well as curious tourists. Scobie-Youngs said that the clock had been in remarkably good condition and that he had been awed by the skill of the 19th-century clockmakers. “Nobody had ever attempted to build a clock that size to the accuracy demanded,” he said, adding, “I refer to it as being the smartphone of the 1850s.” Scobie-Youngs also lauded Big Ben: “There is a unique sound to it,” he said. “It is that unique heartbeat.” The bell’s bong, he said, was instantly recognisable to Britons.

“When people were a long way from home, and it was on the radio, that unique sound brought people home again,” Scobie-Youngs said. Freshly painted, finished with enough gold to cover four tennis courts, and complete with more than 7,000 replacement stones and carvings, the exterior of the Elizabeth Tower stands as a monument to what can be achieved by modern restoration, protecting it, hopefully, for the next 75 years. Even for those who spent years on the project, the result was a pleasant surprise, said Charlotte Claughton, a senior project leader. She said that she was taken aback when the scaffolding came down and she saw the building shining, “as if it was new”, in the sunlight.

“It was hugely exciting to see it. There are a few moments that catch you off guard, and that was one of them,” Claughton said. “It was heartwarming.”