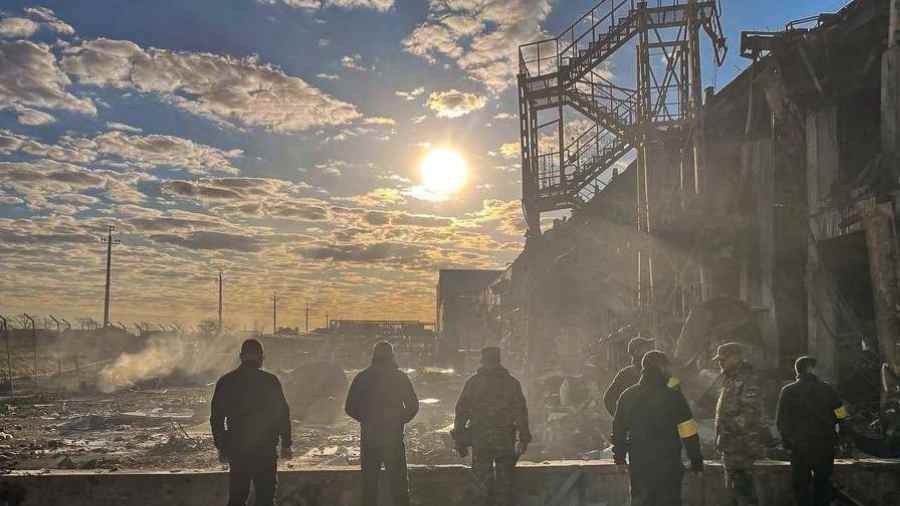 Remains of the shopping mall in Odessa that was hit by a Russian missile.
Twitter/ @DefenceU
Cora Engelbrecht, Dan Bilefsky   |   Published 11.05.22, 01:03 AM

A barrage of Russian missiles struck the southern Ukrainian city of Odessa overnight, signalling Moscow’s apparent effort to pin down Ukrainian forces far from the east, where it is focusing its offensive in an increasingly inconclusive war that is exhausting both sides.

Landmark victories for Russia have been scarce during a grinding war of attrition as both Russia and Ukraine jockey for gains over small areas. But if Russia can hold the territory it occupies in the south and the east and maintain its dominance at sea, it could intensify the pain engulfing Ukraine’s already sputtering economy, improve its leverage in any future negotiated settlement and expand its capacity to stage broader assaults across the country.

Still, Russia said its forces were making some gains along the main front line in the east.

The defence ministry claimed on Tuesday that its forces had pushed deeper into Ukrainian territory, reaching the border between the Luhansk and Donetsk regions.

And underscoring the challenges to Ukraine’s economy under the pressure of an invasion, President Volodymyr Zelensky of Ukraine called for the international community to pressure Russia to lift its blockade of his nation’s ports to prevent a global food crisis.

As the night sky over Moscow was lit by fireworks to mark Victory Day on Monday, Russian forces fired seven missiles at the Black Sea port city of Odessa.

One struck a shopping mall, Ukraine’s southern military command said, another a consumer goods warehouse. Several appear to have failed to reach any target. By Tuesday morning, the fires were mostly extinguished and rescue workers were searching through the wreckage.

At least one person was killed, according to the city government, and several more were wounded. A curfew was in effect when the missiles struck late on Monday, so there were few people in or around the area.

The strike came only hours after one of the EU’s top officials — the European Council president, Charles Michel — made an unannounced visit to the city and was forced to take cover in a bomb shelter because of another attack.

Gennadiy Trukhanov, Odessa’s mayor, toured the damage on Tuesday morning and said the area destroyed “had nothing to do with military infrastructure”.

The Ukrainian military command for the southern region said the missiles fired had included older, less precise models from the Soviet era.