On paper, the Myanmar govt, which signed two repatriation agreements with the country in 2018 and 2019, has consented to taking its citizens back 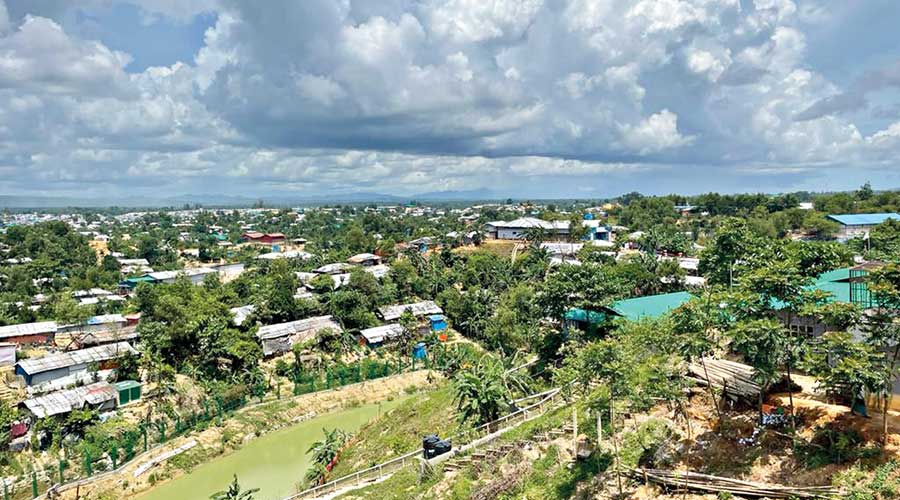 Mohammed Nasirullah (name changed) is grateful to the Bangladesh government, which has housed him in Kutupalong, the world’s largest refugee relief camp at Ukhia in Cox’s Bazar.

But even the persecuted do not live by bread alone.

Nasirullah has been reluctantly sneaking out of his pigeonhole hut at least two to three weeks a month to go fishing near St Martin’s island, a small strip of land in northeast Bay of Bengal.

The absence from the camp has been rewarding: Nasirullah has been earning between Tk (takas) 4,500 to Tk 6,500 a month. In the refugee camp, he has to sustain himself on basic supplies given free. He is aware that he is not allowed to leave the camp and earn in a foreign country.

Nasirullah, who is in his mid-30s, was forced to flee Rakhine state in Myanmar in August 2017 in the face of a military-backed cleansing operation. He crossed the Naf river to reach Teknaf in Bangladesh.

“The Bangladesh government has done so much for us by giving us shelter and the basic necessities to lead a life.... But how long can one sit in the camp?” he asked this correspondent during a recent visit.

“There are employment opportunities outside the camp, which many of us are availing as we too need cash.”

Clad in a white shirt and lungi worn Burmese-style, Nasirullah said that like most of the other Rohingya -- at least 9.25 lakh of them have been settled across 33 camps in Bangladesh -- he too is eager to return to Myanmar, where the community has been living for a thousand years.

On paper, the Myanmar government, which signed two repatriation agreements with Bangladesh in 2018 and 2019, has consented to taking its citizens back.

Two earlier attempts to repatriate the forcibly displaced people had failed because of the Myanmar authorities’ apparent unwillingness, compounding the problems facing the Sheikh Hasina government in Bangladesh.

Back in 2017, when the Bangladesh Premier threw open the gates for over 7 lakh Rohingya, seen as one of the most persecuted ethnic groups in the world, she had won accolades from across the globe.

Although the international community has in the past few years pitched in with financial aid for the Hasina government to sustain the displaced Rohingya, Dhaka has had to spend from its own coffers for the refugees whose numbers in the camps have been growing because of a high birth rate.

As part of an attempt to give a better life to the Rohingya till their repatriation, the Bangladesh government has spent over Tk2,400 crore out of its own pocket and created modern facilities at Bhashan Char, an island under the Hatiya upazila of Noakhali, to gradually relocate around 1 lakh among the displaced people.

Now that August --- which marks five years of the latest round of Rohingya influx --- is nearing, Bangladesh authorities are showing signs of unease with the protracted crisis. They are looking forward to support from the international community, especially India and China, for the repatriation that Myanmar had formally consented to.

“Well, we have been asking the international community to assist us not only in terms of humanitarian efforts that are required to maintain this huge population of over 1 million Rohingya. But at the same time, we have to look towards some sustainable solutions to this problem.… To us, the only feasible solution is the repatriation of Rohingya to Rakhine state from where they came,” Bangladesh foreign secretary Masud Bin Momen told a team of visiting Indian journalists last week.

He said the Bangladesh authorities had kept records of the Rohingya who had arrived after 2017, and shared the details with the Myanmar authorities.

The process of verification of the documents, mandatory for the return of the forcibly displaced people, has been patchy, hindering progress on repatriation.

“I am sure that when PM Sheikh Hasina meets PM Narendra Modi, she will raise the issue,” the Bangladesh foreign secretary added, referring to the points likely to be discussed when the Bangladesh Premier visits India in September.

That Dhaka is expecting New Delhi’s active support for the repatriation has multiple reasons, the most important being the gradual process of the Rohingya’s integration with the local economy.

Bangladesh had earlier swatted away a World Bank offer of $2 billion, which hinged on Dhaka allowing integration of the Rohingya with economic and social rights, and has made efforts to prevent any integration. But hundreds of thousands of Rohingya are slowly slipping out of the camps and offering their labour to the unorganised sector in Cox’s Bazar, known for its serene beaches.

A senior official of a Bangladeshi NGO told this correspondent that people like Nasirullah regularly leave the camp to work in the dockyard at Cox’s Bazar or fish in the sea with local fishermen.

“The Rohingya camps are gradually becoming sources of cheap labour, which is pushing down wage rates in the market,” the official said.

“Besides, some of them are marrying local people and surreptitiously buying property,” the official added, referring to signs of the refugees’ integration with the local population, something the Bangladesh authorities have been trying desperately to prevent.

The other major concern for the authorities is the security threat from the camps because of the alleged influence of the Arakan Rohingya Salvation Army (ARSA), an armed group in Myanmar that remains opposed to repatriation, among the displaced population.

As over 60 per cent of the Rohingya population is young, the authorities also fear the possibility of radicalisation, which may jeopardise the security of the entire region, including India.

“A lot of them are involved in human trafficking, drugs smuggling, gun running and arson.… There is every possibility that some of them will gravitate towards extremism in future, triggering a security threat for the entire subcontinent,” said Commodore M.N. Absar (retired) of the Central Foundation for International and Strategic Studies, a think tank.

A rise in crime rates in and around Cox’s Bazar, a price hike, an increase in poverty, a spike in the cost of housing, and deforestation are some of the other adverse impacts of the protracted refugee crisis, according to Bangladesh authorities.