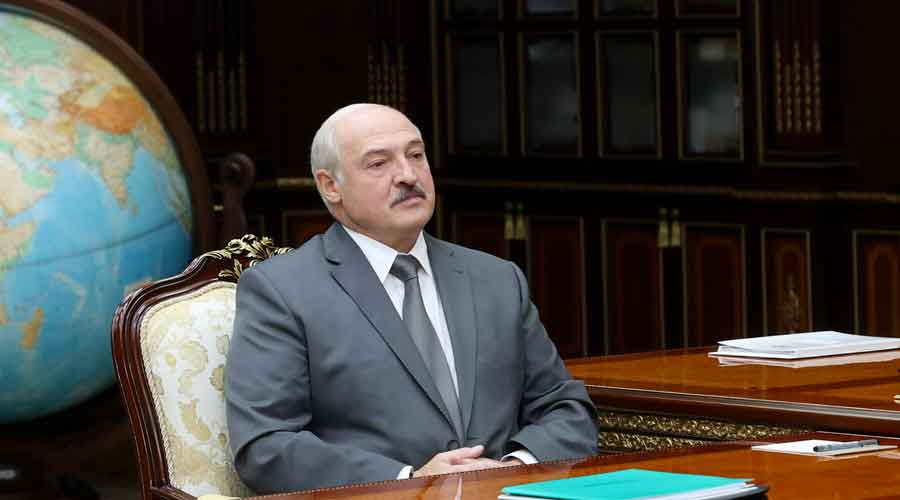 Belarusian President Alexander Lukashenko listens to Valiantsin Sukala, head of the Supreme Court of Belarus during their meeting in Minsk, Belarus, on Monday
AP
PTI   |   Vilnius   |   Published 01.09.20, 12:53 AM

The three Baltic countries on Monday slapped their own travel sanctions on 30 top officials in Belarus, including President Alexander Lukashenko, in response to a brutal crackdown against protesters who say the Aug. 9 presidential election in Belarus was rigged.

Those on the list are banned from entering Lithuania, Latvia and Estonia, according to the document signed by the three Baltic nations' interior ministers.

New people will be added to the list in the future. said Lithuanian President Gitanas Nauseda.

The move comes as the European Union is planning its own sanctions list of up to 20 senior Belarus officials suspected of election fraud and the crackdown on protesters and is likely to put Lukashenko on that list at some point. All three Baltic nations are members of the EU.

Lukashenko, who has ruled Belarus with an iron fist for 26 years, has faced weeks of protests since he was re-elected to a sixth term on August 9 with what officials say was 80 per cent of the vote. The opposition says the poll was rigged, and both the EU and the U.S. say the election was neither free nor fair.

The Baltic travel ban list includes individuals from the president's office and administration, the central election commission, the Interior and Justice ministries and the general prosecutor's office, among others.

Last week, the Lithuanian Foreign Ministry proposed sanctions against 118 individuals suspected of involvement in brutal crackdowns on protesters demanding Lukashenko's resignation and 30 of them are suspected of vote-rigging in Belarus. The two other neighbouring Baltic countries were working on similar plans.