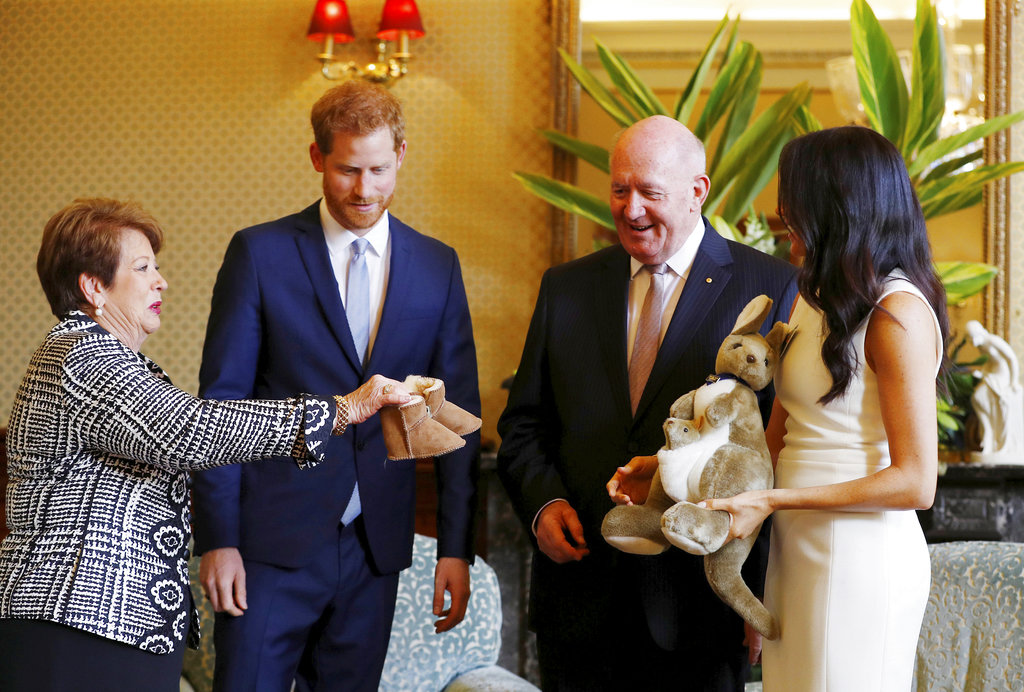 A beaming Duke and Duchess of Sussex thrilled thousands of fans outside the Sydney Opera House on Tuesday during their first meeting with the general public since the former Meghan Markle’s newly announced pregnancy.

Prince Harry and Meghan spent longer than the 20 minutes allocated in their schedule to speak to and shake hands with as many well-wishers as possible. Meghan, wearing a beige trench coat over a sleeveless cream dress by Australian designer Karen Gee, accepted cards and flowers from an enthusiastic crowd.

The news of the pregnancy was announced after the couple arrived in Sydney on Monday and 15 hours before their first public appearance. The two are on a 16-day tour of Australia, Fiji, Tonga and New Zealand that their Kensington Palace staff said would not be altered despite confirmation that the American former actress is pregnant.

Prince Harry and Meghan Markle are expecting their first child

Among those taken by surprise by the announcement were their Sydney hosts, Governor-General Sir Peter Cosgrove and Lady Lynne Cosgrove. The governor-general, who represents Queen Elizabeth II, Australia's head of state and Harry's grandmother, sent staff to hastily buy a toy kangaroo with a joey in its pouch and a tiny pair of Australian sheep skin boots for their pregnant guest.

“Here’s your first gift for the nursery,” the governor-general told the couple during a welcome ceremony at his official residence, Admiralty House.

“Thank you, that’s so sweet,” Meghan said as she received the toy.

The pregnancy has made front-page news across Australia. 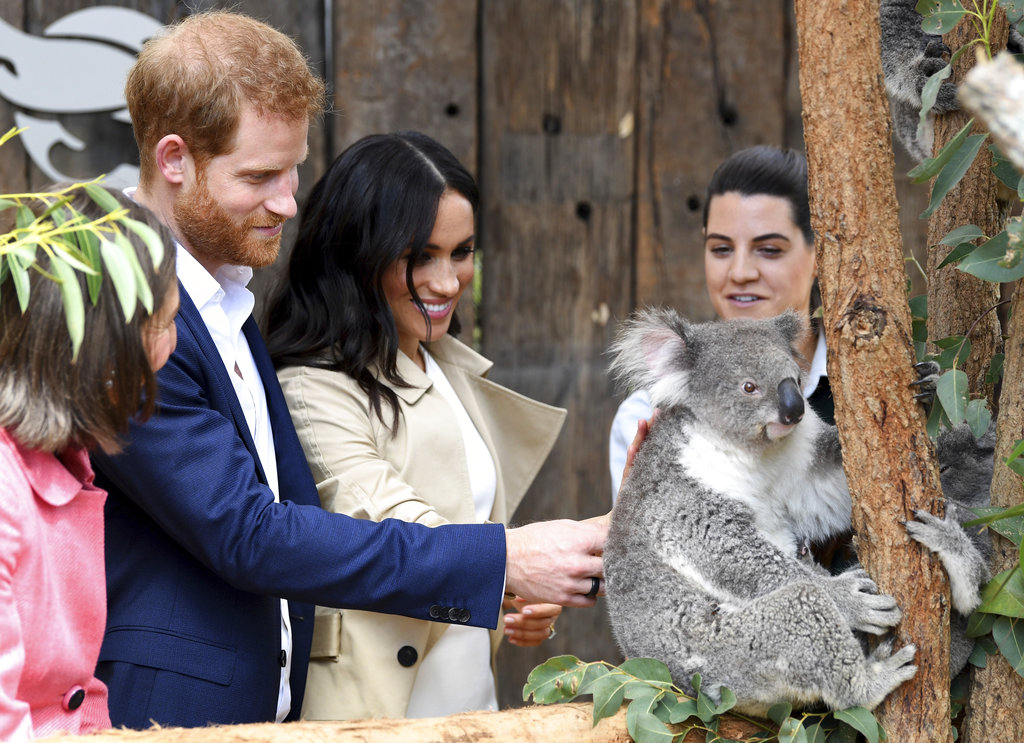 Outside the Opera House on Tuesday, Harry lingered longest with war widow Daphne Dunne, 98, whom he hugged as they chatted.

It was the third time that they had met since Harry’s eye caught sight of a Victoria Cross medal on her chest during a Sydney visit in 2015. She explained that her first husband Albert Chowne had been given the highest award in the British honours system after he died in Papua New Guinea in 1945.

This time, Meghan joined Harry in greeting the Dunne, who admires the prince’s work with veterans.

“Oh my goodness, is this Daphne?” Meghan asked.

Dunne later said Meghan told her “she had heard all about me; she’s so beautiful”.

“I wished them well with the baby on the way and said this is what Harry has been waiting for so long,” Dunne added. 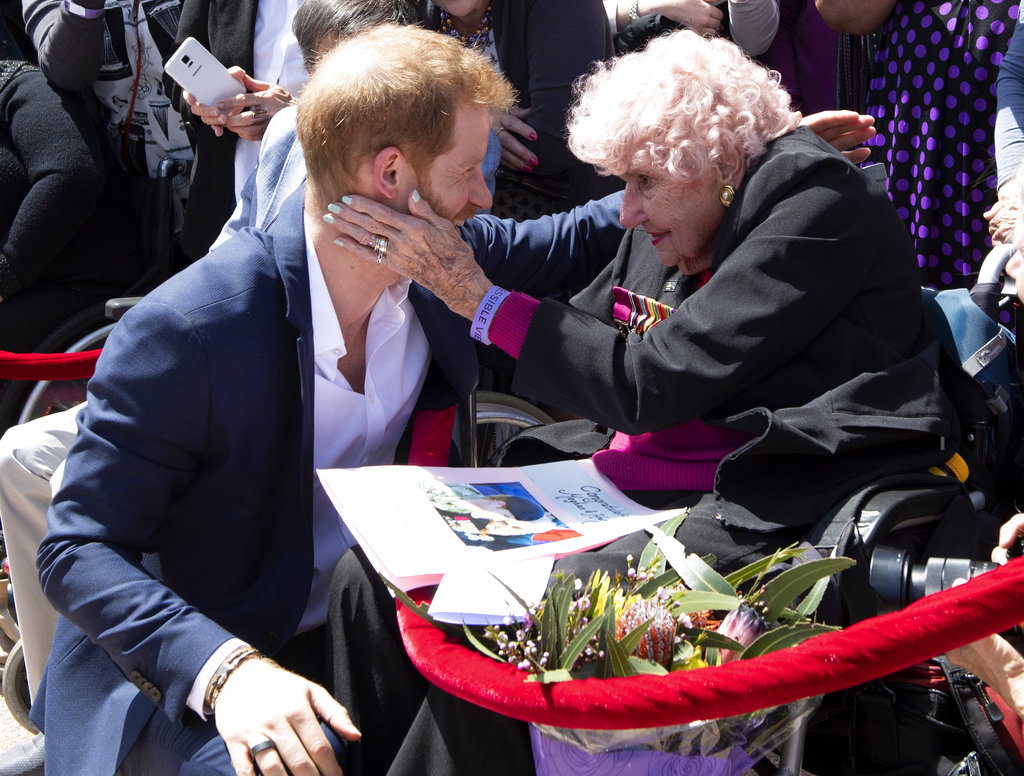 Harry meets 97-year-old Dafney Dunne during a walk about outside the Opera House in Sydney.
AP

Before Megan donned her coat, her tight-fitting dress barely revealed a bump as they were welcomed at the first event of the day at the Sydney Harbor-side mansion where the two are staying.

The main focus of that engagement was to meet Invictus Games representatives from the 18 countries competing in the event that starts Saturday. The sporting event, founded by Harry in 2014, gives sick and injured military personnel and veterans the opportunity to compete in sports such as wheelchair basketball.

Several of the representatives congratulated the couple on their baby news. Meghan replied: “Thank you so much. We are very excited.”

The couple later traveled by boat to Taronga Park Zoo where they opened a research center and met two 10-month old koalas that had been named after them.

They watched an indigenous dance company rehearse inside the Opera House before meeting the public.

The announcement of the pregnancy confirms weeks of speculation from royal watchers about why Meghan was not joining Harry on his Sydney Harbor Bridge climb set for Friday.

Harry, 34, and Meghan, 37 — along with Prince William and his wife, Kate, the duchess of Cambridge — have stepped to the fore in the last year as the 92-year-old queen slightly reduces her public schedule.