Advertisement
Home / World / Attacks to drive away tourists from Lanka

Attacks to drive away tourists from Lanka

Travellers cautioned against trips to island nation in blow to tourism 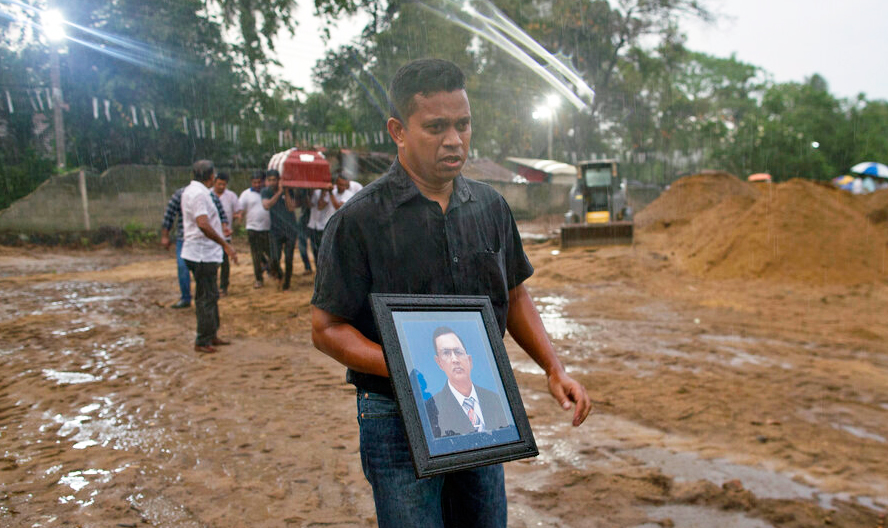 A relative carries a portrait of Calistas Fernando ahead his coffin for burial during the funerals of three people of the same family, all died at Easter Sunday bomb blast at St. Sebastian Church in Negombo, Sri Lanka on Monday, April 22, 2019.
(AP)
Reuters   |   Colombo   |   Published 22.04.19, 08:42 PM

With its capital under curfew following devastating Easter Sunday bomb attacks on churches and upmarket hotels, Sri Lanka is filled with fear, horror and grief and tourists who have been flocking to the Indian Ocean island could cancel in droves.

A tweet posted on the travel booking website First Choice captured the trepidation among holidaymakers, while some airlines and travel agents said they would waive cancellation charges for people scheduled to travel imminently. “What are you doing about the holidays you have booked to that country?” tourist Judith Ann Clayton asked on the social media site.

“Clearly it is unsafe for anyone to go there.”

Others set to travel said they would not to be cowed into cancelling.

“Not giving in to terror. We want to support you in your time of need. Never gave any thought about cancelling our trip,” Facebook user John Karmouche said in a post.

Named by the Lonely Planet guide for independent travellers as the best country to visit in 2019, Sri Lanka had rebuilt its image as a tropical paradise after crushing a long-running separatist insurgency by ethnic minority Tamils a decade ago.

Arrivals of 2.3 million last year were up by more than 400 per cent on 2009 levels, according Sri Lanka Tourism Development Authority data.

But the suicide bombers who killed at least 290 people, including 32 foreigners, and wounded 500 have in all likelihood ended the boom in tourism for some time.

Denmark’s richest man, Anders Holch Povlsen, and his wife lost three of their four children in a blast at one of the hotels. A British mother and son were killed at a breakfast buffet and two Australians were also among the dead.

The industry was the third largest and fastest growing source of foreign currency, after private remittances and textile and garment exports, accounting for almost $4.4 billion or 4.9 per cent of gross domestic product (GDP) in 2018.

“The attacks will not only impact already weak economic activity (real GDP growth was at a 17-year low of 3.2 per cent in 2018), but also the country’s relatively vulnerable external liquidity position,” Citi Asia Economics said in a note that warned the hardest blow would fall on tourism.

The US state department said in a revised travel advisory of the danger of “terrorist groups” plotting more attacks. Targets could include tourist locations, transport hubs, shopping malls, hotels, places of worship and airports.

Other governments, including Japan and Australia, have also cautioned citizens planning travel to Sri Lanka.

JTB, Japan’s largest travel agency, has waived cancellation charges, and modified its package tours leaving Japan before May 10 to avoid risky locations, like Colombo, and will decide later on tours leaving after May 11, a spokeswoman said.

India was the single largest source of visitors last year, with 425,000, while 266,000 came from China and more than 254,000 from old colonial power Britain. Visitors come for the glorious vistas across the forests in the national parks, the surf crashing on sandy beaches, verdant tea plantations, Buddhist temples and old colonial towns.