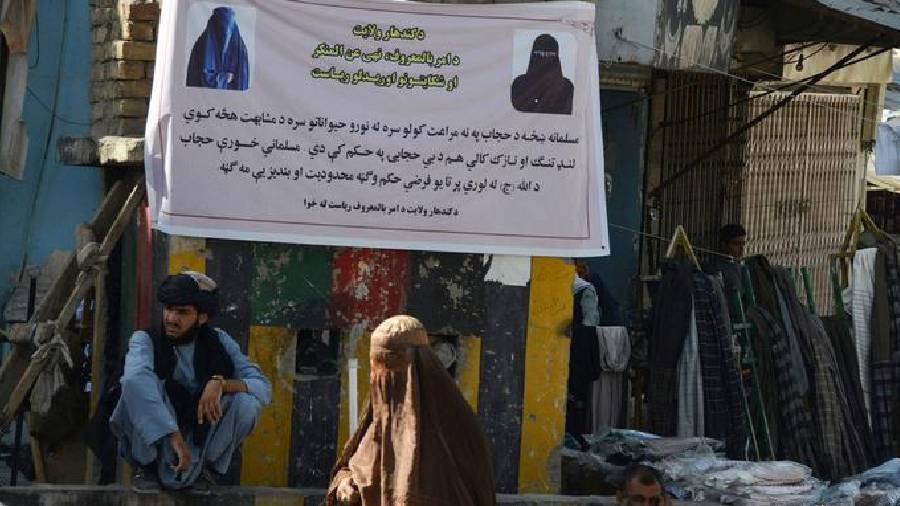 The Taliban have "decimated" the rights of Afghan women and girls since they returned to power in Afghanistan almost a year ago, an Amnesty International report said on Wednesday.

This includes rights to education, work and free movement which have been severely curtailed under the draconian rules of the regime.

"Every daily detail — whether they go to school, if and how they work, if and how they leave the house — is controlled and heavily restricted. This suffocating crackdown against Afghanistan’s female population is increasing day-by-day," said Agnès Callamard, Amnesty International’s Secretary General.

The report titled "Death in Slow Motion: Women and Girls Under Taliban Rule" interviewed more than a hundred Afghan women and girls and revealed that those who protested against the restrictions were "threatened, arrested, detained, tortured, and forcibly disappeared. "

When the Taliban first came to power in 2021, they promised to uphold women's rights. These promises were soon proven hollow as policies of systemic oppression of women were introduced, activists say.

Those who protested these discrimination were targeted by the Taliban with harassment, arbitrary detention, and physical and psychological torture, said the report.

"The Taliban guards kept coming to my room and showing me pictures of my family. They kept repeating ... 'We can kill them, all of them, and you won’t be able to do anything,'" said one woman who was sent to a Taliban prison.

"We were beaten on our breasts and between the legs. They did this to us so that we couldn't show the world," said another woman.

Women are also being arbitrarily detained and tortured for crimes such as appearing in public with a man who does not qualify as "mahram" - a male chaperone.

Survivors of domestic and gender-based violence have said that they are being sent to prisons, instead of shelters, which do not exist. Here, the women are "subjected to solitary confinement, beatings and other forms of torture, and forced to endure inhumane conditions."

Under the Taliban regime, the number of child marriages have surged.

"In Afghanistan… You have a patriarchal government, war, poverty, drought, girls out of school — with all of these factors combined… we knew child marriage was going to go through the roof," said Stephanie Sinclair, director of Too Young to Wed, an organization working on early marriages.

Meanwhile, Afghan girls continue to be denied the right to education. The Taliban's schedule to reopen school for girls in March 2022 was scrapped as girls were sent home citing a "technical issue" related to their uniforms.

Amnesty International called upon the international community to respond to these violations of human rights by the Taliban regime by imposing targeted sanctions on Taliban leaders.

"The relentless oppression of women in Afghanistan is intensifying day by day. If the international community does nothing, millions of women and girls in Afghanistan will be left to their own devices," said Julia Duchrow, Deputy Secretary General of Amnesty International in Germany.