Advertisement
Home / World / A sea of white, lit by history

A sea of white, lit by history 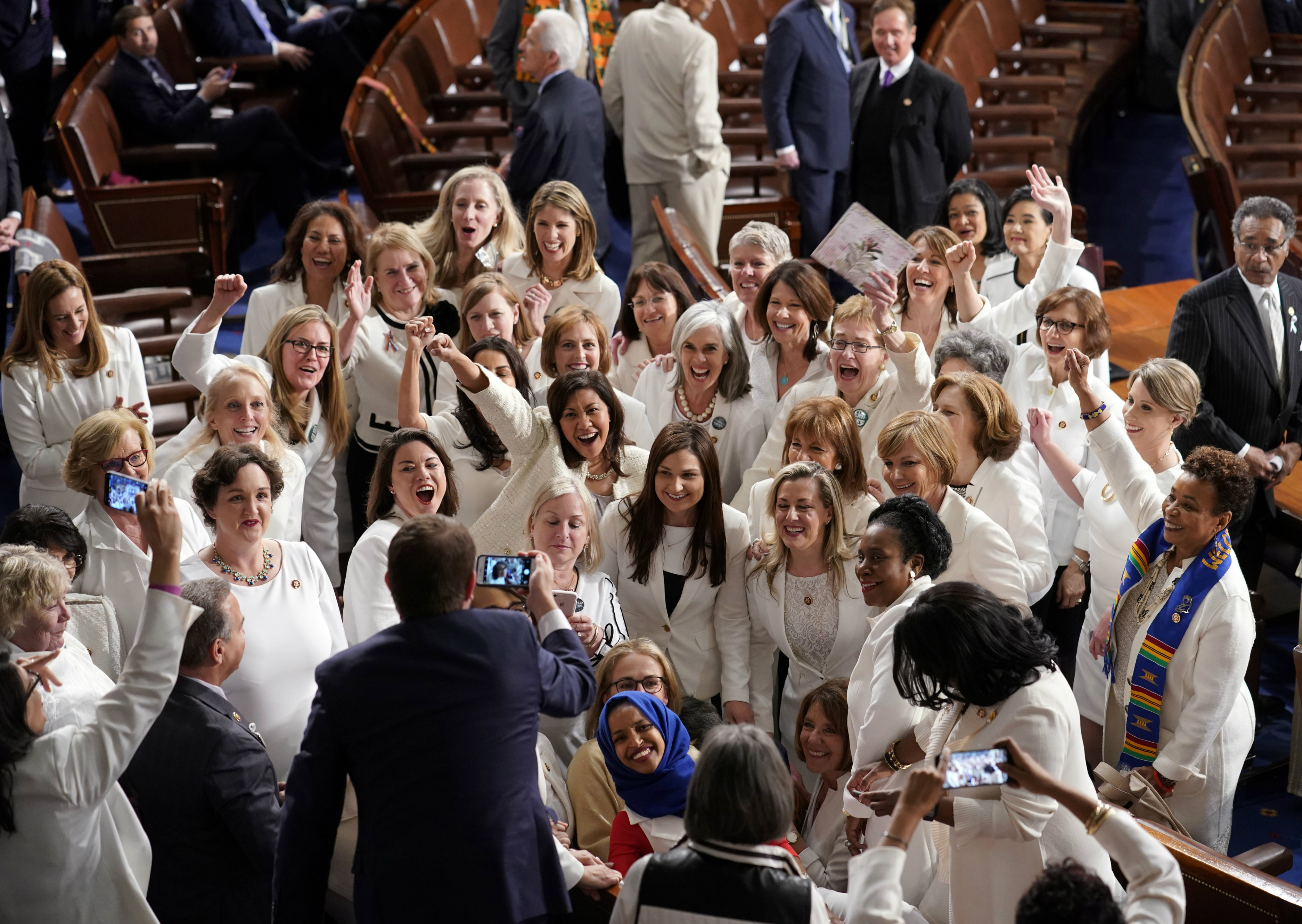 As Congress awaited Donald Trump’s entrance, the most striking sight was the unmistakable block of Congresswomen practically aglow in white on the Democratic side of the aisle.
The New York Times
Vanessa Friedman/NYTNS   |   Published 07.02.19, 08:23 AM

For anyone who has ever thought that the use of clothing as a political tool was frivolous or overstated, or groaned at yet another piece insisting that a woman in a white pantsuit was making a statement, there was no better riposte than the State of the Union address on Tuesday night.

When the television cameras came up on the buzzing House chamber as Congress awaited President Donald Trump’s entrance, the most striking sight was not the grandeur of the room (though it is pretty grand) or the nerves and excitement of the special guests, but rather the unmistakable block of Congresswomen practically aglow in white on the Democratic side of the aisle.

They were wearing white shirts (Rep. Sharice Davids of Kansas) and white capes (Rep. Alexandria Ocasio-Cortez of New York). There were also white vests (Rep. Ilhan Omar of Minnesota, who paired hers with a blue head scarf and red shirt — a statement of patriotism as clear as the Trump-Pence red-tie-blue-tie-white-shirt twofer), and many, many white jackets and suits, including on Nancy Pelosi, Speaker of the House. And there was no way that either the President or the viewing public could miss them or miss the message in what they wore: one of gender equality and pride, the long arc of history and the fight for women’s rights, commitment to an agenda and, in the background, joy. It was in front of him, when he looked out upon the room, and in back, as Pelosi wielded her gavel.

Ilhan Omar of Minnesota paired her white vest with a blue head scarf and red shirt — a statement of patriotism as clear as the Trump-Pence red-tie-blue-tie-white-shirt twofer.
The New York Times

Nancy Pelosi was one of many, many Congresswomen in white jackets and suits.
The New York Times

The women had announced their plans on Tuesday afternoon, with Representative Lois Frankel of Florida tweeting: “At State of the Union tonight, @realDonaldTrump will look out at the House Chamber and see a sea of #Suffragette white sending the message loud&amp;clear that @HouseDemWomen are fighting for the economic security of women &amp; families.”

But knowing it was planned and seeing the effects were not the same thing. As a piece of political theatre, the white was strikingly effective.

On a night when the role of the audience in the chamber was to listen and, maybe, stand and applaud (or sit and look disappointed), the women still managed to make themselves heard. And on a night when Trump used a series of guests in the balcony as symbols, they offered a powerful symbol of their own.

Part of that was, indubitably, the sheer mass of gathered women — of the 102 in the House, 89 are Democrats, and almost all of them wore white, which gave the group critical mass (Frankel had also invited the 13 Republican women to wear white, but it was hard to tell if they had joined in). But part of it was also the way they wore the colour: unapologetically, like a sign of enthusiasm for their job. Like it was fun. Like clothes were something to be enjoyed and leveraged, rather than played down and dismissed or used as protective or deflective armour.

It wasn’t about fashion. It was about the past and the future and solidarity, contained in colour.

It wasn’t about fashion. It was about the past and the future and solidarity, contained in colour.
The New York Times

It made for a powerful contrast with the tightly belted quasi-military black skirt suit of Ivanka Trump and the sharply buttoned-up black Burberry trench dress with big silver buttons worn by Melania Trump, the first lady, who also wore black leather gloves, a reported nod to decorum that seemed vaguely sinister. (Not to mention the section in the President’s speech about the danger lurking at the border, with its dire overtones.) Or with the camouflaging beards that both Eric Trump and Donald Trump Jr, and Sen. Ted Cruz of Texas, have sprouted.

The island of white also raised all sorts of questions around the white dress of Tiffany Trump, especially for those who embrace any opportunity to posit Trump family members as secret rebels (see the “Free Melania” gang).

Despite all the pre-publicity that the House members did, it’s possible Tiffany Trump simply missed the message. After all, the organisers also urged male representatives to wear white shirts and white ribbons — and both the president and vice president, as well as many other Republicans, wore at least white shirts, though maybe not for that reason. So the point kind of got lost.

Chances are, this kind of dress activism will continue. This was, after all, the third time in a row that the Trump opposition in Congress had used clothing as a form of communication.

On a night when Trump used a series of guests in the balcony as symbols, they offered a powerful symbol of their own.
The New York Times

Coming off an election where the white pantsuit was first revived as a suffragist symbol thanks to Hillary Clinton’s acceptance speech at the 2016 Democratic convention (did she know what she was going to start?) and a Facebook movement that urged women to wear white to the polls, Congresswomen in 2017 wore white to Trump’s first speech to the joint House and Senate. That effort did not have quite the impact the same choice had Tuesday, perhaps because of the smaller numbers at the time.

Then, at the 2018 State of the Union address, many women wore black in solidarity with the #MeToo movement — though again, all the dark suits in a sea of dark suits were less visually arresting. Instead, Melania Trump in her white pantsuit was the focus of attention.

Now, however, we are at breakthrough.

In this social media age, where the conversation of the moment is driven by screen grabs and memes, the art of creating viral imagery is crucial to influence. And — let’s face it — what we put on our bodies, how we look, is a major part of that.

On Tuesday, the record number of Congresswomen at the State of the Union speech owned that. And they wore it well.