‘It is like genocide’, a news outlet quoted a protest organiser called Ye Htut as saying 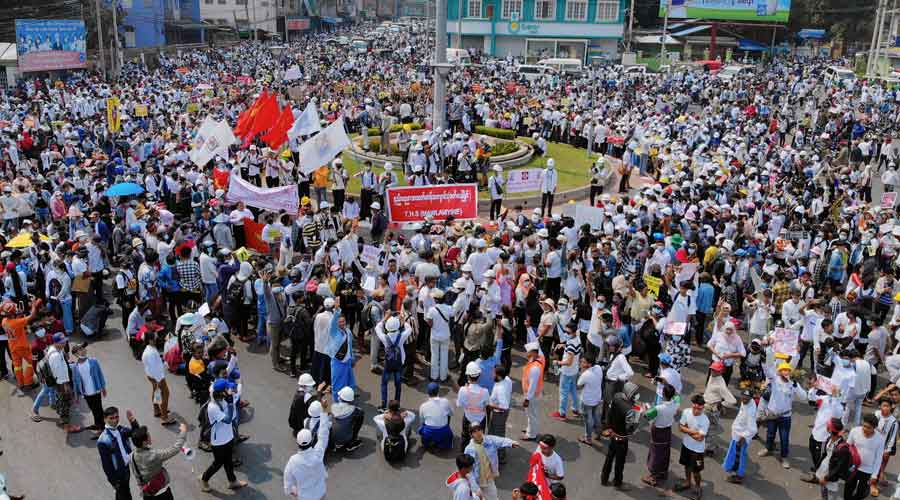 Details of the death toll in the town of Bago, 90km (55 miles) northeast of Yangon, were not initially available because security forces piled up bodies in the Zeyar Muni pagoda compound and cordoned off the area, according to witnesses and domestic media outlets.

The AAPP and Myanmar Now news outlet said on Saturday that 82 people were killed during the protest against the February 1 military coup in the country. Firing started before dawn on Friday and continued into the afternoon, Myanmar Now said.

“It is like genocide,” the news outlet quoted a protest organiser called Ye Htut as saying. “They are shooting at every shadow.”

Many residents of the town have fled, according to accounts on social media.

A spokesman for Myanmar's military junta could not be reached on Saturday.

AAPP, which has maintained a daily tally of protesters killed and arrested by security forces, has previously said 618 people have died since the coup.

That figure is disputed by the military, which says it staged the coup because a November election won by Aung San Suu Kyi’s party was rigged. The election commission has dismissed the assertion.

Junta spokesman Major General Zaw Min Tun told a news conference on Friday in the capital, Naypyitaw, that the military had recorded 248 civilian deaths and 16 police deaths, and said no automatic weapons had been used by security forces.

An alliance of ethnic armies in Myanmar that has opposed the junta’s crackdown attacked a police station in the east on Saturday and at least 10 policemen were killed, domestic media said.

The police station at Naungmon in Shan state was attacked early in the morning by fighters from an alliance that includes the Arakan Army, the Ta’ang National Liberation Army and the Myanmar National Democratic Alliance Army, the media reported.

Shan News said at least 10 policemen were killed, while the Shwe Phee Myay news outlet put the death toll at 14.

Myanmar’s military rulers said on Friday that protests against its rule were dwindling because people wanted peace, and that it would hold elections within two years.

Ousted Myanmar lawmakers urged the UN Security Council on Friday to take action against the military.

“Our people are ready to pay any cost to get back their rights and freedom,” said Zin Mar Aung, who has been appointed acting foreign minister for a group of ousted lawmakers. She urged Council members to apply both direct and indirect pressure on the junta.

“Myanmar stands at the brink of state failure,” Richard Horsey, a senior adviser on Myanmar with the International Crisis Group, told the informal UN meeting.

Nineteen people have been sentenced to death in Myanmar for killing an associate of an army captain, the military owned Myawaddy TV station said on Friday, the first such sentences announced in public since a February 1 coup and crackdown on protesters.

The report said the killing took place on March 27 in the North Okkalapa district of Yangon. Martial law has been declared in the district, allowing courts martial to pronounce sentences.

The military rulers who overthrew an elected government said on Friday that a protest campaign against its rule was dwindling because people wanted peace, and that it would hold elections within two years, the first timeframe it has given for a return to democracy.

Troops fired rifle grenades at anti-coup protesters on Friday in the town of Bago, near Yangon, witnesses and news reports said. At least 10 people were killed and their bodies piled up inside a pagoda, they said.

Myanmar Now news and Mawkun, an online news magazine, said at least 20 people were killed and many wounded. It was not possible to get a precise toll because troops had cordoned off the area near the pagoda, they said.

Junta spokesman Brigadier General Zaw Min Tun told a news conference in the capital, Naypyitaw, that the country was returning to normal and government ministries and banks would resume full operations soon.

More than 600 people have been killed by security forces cracking down on protests against the coup, according to an activist group. The country has ground to a standstill because of the protests and widespread strikes against military rule.

“The reason of reducing protests is due to cooperation of people who want peace, which we value,” Zaw Min Tun said. “We request people to cooperate with security forces and help them.”

He said the military had recorded 248 deaths and he denied that automatic weapons had been used. Sixteen policemen had also been killed, he said.  AAPP has said 614 people, including 48 children, had been killed by security forces since the coup, as of Thursday evening. More than 2,800 were in detention, it said. “We are humbled by their courage and dignity,” a group of 18 ambassadors in Myanmar said of the protesters in a joint statement.

“We stand together to support the hopes and aspirations of all those who believe in a free, just, peaceful and democratic Myanmar. Violence has to stop, all detainees must be released and democracy must be restored.”

The statement was signed by the envoys of the US, the UK, the EU, Canada, Australia, New Zealand, South Korea and Switzerland.