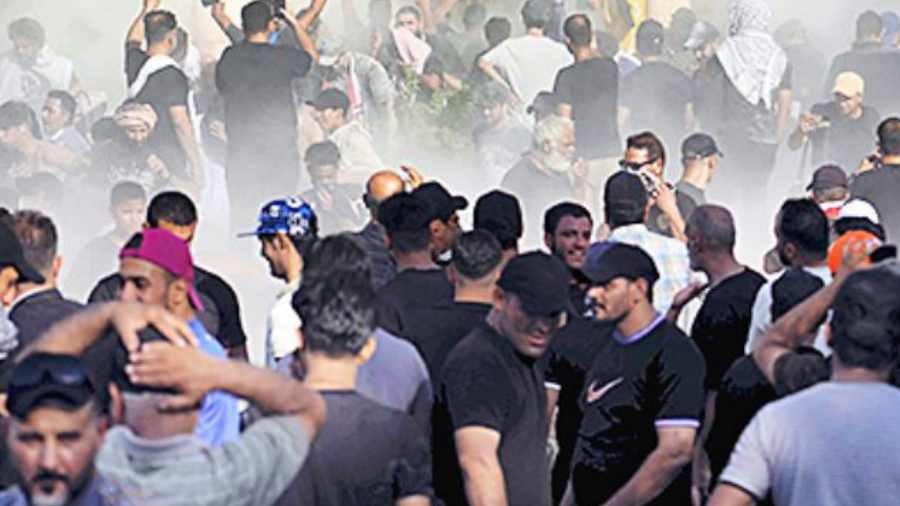 An influential Shia cleric announced on Monday he would resign from Iraqi politics, prompting hundreds of his angry followers to storm the government palace, sparking clashes with security forces in which at least five protesters were killed.

Protesters loyal to cleric Muqtada al-Sadr pulled down the cement barriers outside the government palace with ropes and breached the palace gates. Many rushed into the lavish salons and marbled halls of the palace, a key meeting place for Iraqi heads of state and foreign dignitaries. Iraq’s military announced a nationwide curfew and the caretaker Premier suspended cabinet sessions in response to the violence.

Medical officials said at least 15 protesters were wounded by gunfire and a dozen more were injured by tear gas and physical altercations with riot police. Iraq’s government has been deadlocked since al-Sadr’s party won the largest share of seats in October parliamentary elections but not enough to secure a majority government.

His refusal to negotiate with his Iran-backed Shia rivals and subsequent exit from the talks has catapulted the country into political uncertainty and volatility amid intensifying intra-Shia wrangling. An Associated Press photographer heard gunshots being fired in the capital and saw several protesters bleeding and being carried away.

A senior medical official confirmed at least five protesters were killed by gunfire. Protests also broke out in the Shia-majority southern provinces with al-Sadr’s supporters burning tyres and blocking roads in the oil-rich province of Basra and hundreds demonstrating outside the governorate building in Missan.  Iran considers intra-Shia disharmony as a threat to its influence in Iraq and has repeatedly attempted to broker dialogue with al-Sadr.

The cleric announced his withdrawal from politics in a tweet and ordered the closure of his party offices. His announcement appeared to be in part a reaction to the retirement of Shia spiritual leader Ayatollah Kadhim al-Haeri.

Fisticuffs in the cockpit, leaving a leaky engine running while cruising over Africa — Air France pilots are under scrutiny after recent incidents that have prompted French investigators to call for tougher safety protocols. Two Air France pilots were suspended after physically fighting in the cockpit on a Geneva-Paris flight in June, an Air France official said Sunday.

The flight continued and landed safely, the official said. French newspaper La Tribune reported that the pilot and co-pilot had a dispute shortly after takeoff, and grabbed each other by their collars after one apparently hit the other. Cabin crew intervened and one crew member spent the flight in the cockpit with the pilots, the report said.