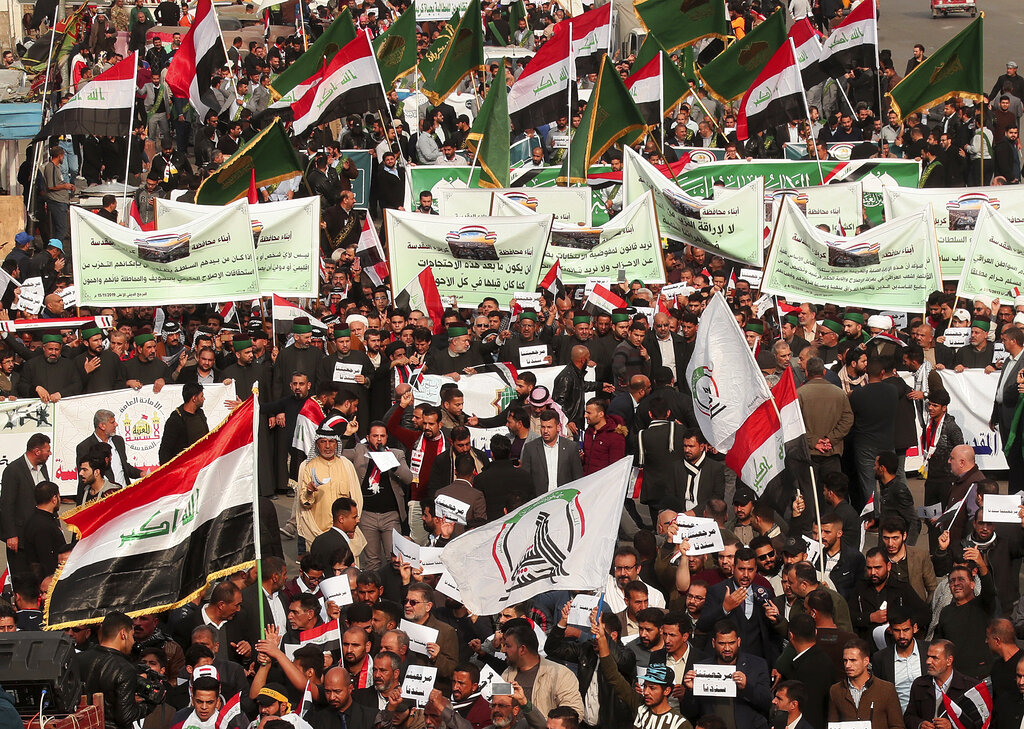 At least two of the dead were policemen.

Protesters fearing for their lives ran from the plaza to nearby Tahrir Square and mosques to take cover. It wasn't immediately clear who did the shooting.

The attack came as anti-government demonstrators occupied parts of Jumhuriya, Sinak and Ahar bridges in a standoff with security forces. All the bridges lead to or near the heavily-fortified Green Zone, the seat of Iraq's government.

'We are under live fire now with electric power cut, the wounded and martyrs are here and the bullets were fired in Sinak Bridge,' said one protester, who did not give their name for fear of retaliation.

The attack came a day after a string of suspicious stabbing incidents targeting demonstrators left at least 13 wounded in Baghdad's Tahrir Square, the epicenter of Iraq's leaderless protest movement.

Those attacks by unknown perpetrators occurred as demonstrators supporting political parties and Iran-backed militias withdrew from the Square. The incidents on Thursday fueled paranoia among protesters, who immediately implemented self-security measures to uncover saboteurs within the square.

At least 400 people have died since the leaderless uprising shook Iraq on October 1, with thousands of Iraqis taking to the streets in Baghdad and the predominantly Shiite southern Iraq decrying corruption, poor services, lack of jobs and calling for an end to the political system that was imposed after the 2003 US invasion.

Earlier, Iraq's highest Shiite religious authority called for the formation of a new government within the allotted deadline, and without foreign interference, as the clock ticks down on lawmakers to select a new premier following the resignation of Prime Minister Adel Abdul-Mahdi last week.

Thousands of anti-government protesters from across southern Iraq had joined demonstrators in Tahrir Square, the epicenter of the protest movement in the capital, hours after the sermon, according to security officials.

'We hope the head of the new government and it's members are chosen within the constitutional deadline and according to the aspirations of the people and away from outside influence,' the Grand Ayatollah Ali al-Sistani said in his weekly Friday sermon in the holy city of Najaf. The sermon is always delivered by a representative.

He added that the Shiite religious establishment would not take part in the government formation process.

Parliament had 15 days since his stepping down was formally recognised by lawmakers last Sunday to name a new nominee, per the constitution.

Since the US invasion of 2003, government formation in Iraq has been based on brokering consensus among political factions and their foreign allies, primarily the US and Iran.

Lawmakers made headway in passing a key reform bill to change the membership of Iraq's controversial Independent High Electoral Commission, the body tasked with overseeing polls, in a session Thursday night. Anti-government protesters consider IHEC a corrupt and partisan institution and its commissioners working in favor of political parties. The new law seeks to select commissioners primarily from the judiciary.

Protesters are also calling for early elections and reforms to have a greater influence in electing their representatives.

Al-Sistani, Iraq's most powerful religious figure who's opinion holds sway over Iraqis, also said peaceful protesters should increase their ranks and push out saboteurs, while respecting the role of the 'indispensable' security forces.

Following the sermon, thousands of protesters traveled to Baghdad from across southern Iraqi provinces and marched on Tahrir Square, including from Dhi Qar, Diwanieh, Karbala, Najaf, Babylon and Missan, security officials said, chanting the slogan 'Sistani, we are his soldiers.'