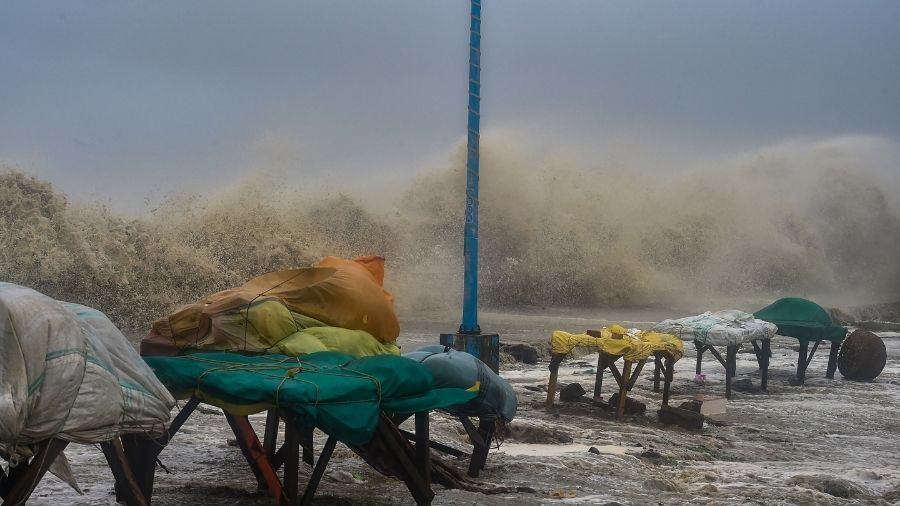 Yaas weakened into a severe cyclonic storm on Wednesday afternoon after pounding the beach towns in north Odisha and Bengal with a wind speed of 130-145 kmph, inundating the low-lying areas amid a storm surge even as the two eastern states battled the Covid crisis, officials said.

Yaas, which was earlier classified as a very severe cyclonic storm, hit the coast north of Dhamra in Odisha's Bhadrak district and 50 km south of Balasore, close to Bahanaga block, around 9 am, they said.

The landfall process was over around 1.30 pm, they added.

The seaside towns of Digha and Mandarmoni in East Midnapore and Fraserganj and Gosaba in South 24-Parganas were among the areas affected by a storm surge of more than 2 metres above the astronomical tide level.

The surging waters have breached embankments at several places in the two coastal districts, inundating many villages and small towns, officials said.

Water levels of several rivers including Bidyadhari, Hooghly and Rupnarayan have risen owing to Yaas and the accompanying storm surge.

Bengal Chief Minister Mamata Banerjee said that at least one crore people in the state have been affected by rough weather conditions and high tides arising due to the cyclone, while over 15 lakh people have been evacuated to safe places.

“Around three lakh houses have suffered damage due to Yaas. I will visit the affected areas in East Midnapore, South and North 24 Parganas on Friday,” the chief minister said, addressing a press conference after the landfall process was completed.

The government has sent relief worth Rs 1 crore to areas affected by cyclone and high tide, she informed.

The Army has deployed 17 columns to assist the state administration, of which one rescued 32 stranded civilians at Digha, a Defence official said.

The Bengal government has evacuated over 15 lakh people from vulnerable areas to safety so far.

The landfall process of Yaas began at 9 am on Wednesday near the Dhamra port in Odisha's Bhadrak district, an official said.

The location of the landfall is north of Dhamra and south of Bahanaga, close to Bahanaga block, on the coast, around 50 km of Balasore, he said.

The India Meteorological Department (IMD) earlier predicted that the wind speed during the landfall would be around 155-165 kmph, gusting to 185 kmph.

The landfall process was delayed for some hours with the system's velocity decreasing to 12 kmph from 15-16 kmph, Jena said.

The cyclone did not intensify any further after 2 am, he said.

"Since there has been a fall in intensification, the wind speed was around 130-140 kmph at the time of landfall instead of 165 kmph," he said.

Most parts of Odisha also received rains, said Umashankar Dash, a scientist at the Regional Meteorological Centre in Bhubaneswar.