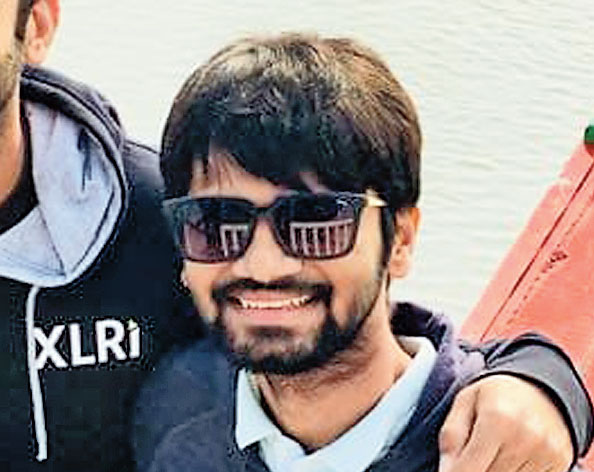 A business management student at XLRI—Xavier School of Management in Jamshedpur was found dead early on Saturday in the en-suite bathroom of a room at the Peerless Inn hotel with four stab wounds on his neck and a kitchen knife beside the body.

Harsh Balani, a 24-year-old engineering graduate in his second year at XLRI, had checked into the hotel at 12 Jawaharlal Nehru Road around 11.30am on Thursday. He was to check out on Friday, but a “do-not-disturb” sign at the door to the room kept the hotel staff from immediately enquiring whether he had changed his travel plans, police said.

It wasn’t until late in the day that staff at the Peerless Inn reception tried contacting Harsh, who is from Rajkot in Gujarat and had studied engineering at BITS Pilani.

“We tried contacting him thrice over phone. His mobile phone was switched off. In accordance with protocol, we used a duplicate key to enter the room at 1.30pm on Friday. When our staff stepped into the room, they found his clothes and other personal belongings strewn on the bed. Realising that the guest had not checked out, the staff immediately exited,” Sayantan Acharya, senior duty manager at the hotel, said.

Around 1.30am on Saturday, the hotel reception received a call from a person who introduced himself as Harsh’s college friend from Jamshedpur. “The friend expressed concern that Harsh was not taking calls,” the hotel said in a statement to the police.

When security officials at the hotel again used a duplicate key to enter the room around 2am, it was exactly in the same state as it was at 1.30 in the afternoon, Acharya said.

Harsh wasn’t in the room and the bathroom was found locked from inside. Using screwdrivers, the hotel staff opened the door to find the young man in a pool of blood and water under the shower. This was immediately reported to New Market police station.

Till late on Saturday, investigators were trying to piece together the sequence of events leading to Harsh checking into Peerless Inn and what might have happened in the time he spent at the hotel before his body was found.

An officer at the city police headquarters in Lalbazar said the “place of occurrence was undisturbed”, implying that investigators didn’t find any sign of resistance or struggle by Harsh. The wounds that killed the XLRI student were possibly inflicted with the knife found beside him, they said.

The police will make a statement regarding whether the fatal injuries were self-inflicted only after receiving the post-mortem report, the officer said.

Investigators have collected CCTV footage from the hotel to check if Harsh had any guest during his stay at the hotel.

“His friends have said he did not tell them where he was going. They came to know where he was after checking his laptop, which contained details of him using a travel portal to book his ticket to Calcutta and a room at the Peerless Inn. Someone in the group then contacted the hotel to ask after him,” the officer said.

The police suspect Harsh had come to the city to “meet a friend”.

His mobile phone, which was in the hotel room along with his bag, has been sent for a forensic examination.

“This is an extremely sad piece of news for us. Some of our students have rushed to Calcutta. We have been informed that a post-mortem has been conducted to ascertain the cause of his untimely demise. Harsh, as far as we know, was a nice young man,” said a spokesperson for XLRI.

Harsh’s Facebook profile is mostly private and displays only the profile and cover pictures. One of them is with a youth on a boat and captioned “Dosti (friendship)”. The other is a fun picture showing a group of possibly XLRI students wearing coats and ties with shorts and sandals.

The profile mentions that Harsh had interned with Uber, the global pioneer in rideshare technology.

An article in the website `insideiim.com`, headlined “Life at a B-School after Cracking PPOs”, quotes the Rajkot boy who received a pre-placement offer from Uber as saying that his life is “Eat, sleep, play, repeat!”.