The workers had returned home in Nadia, Murshidabad and Birbhum districts 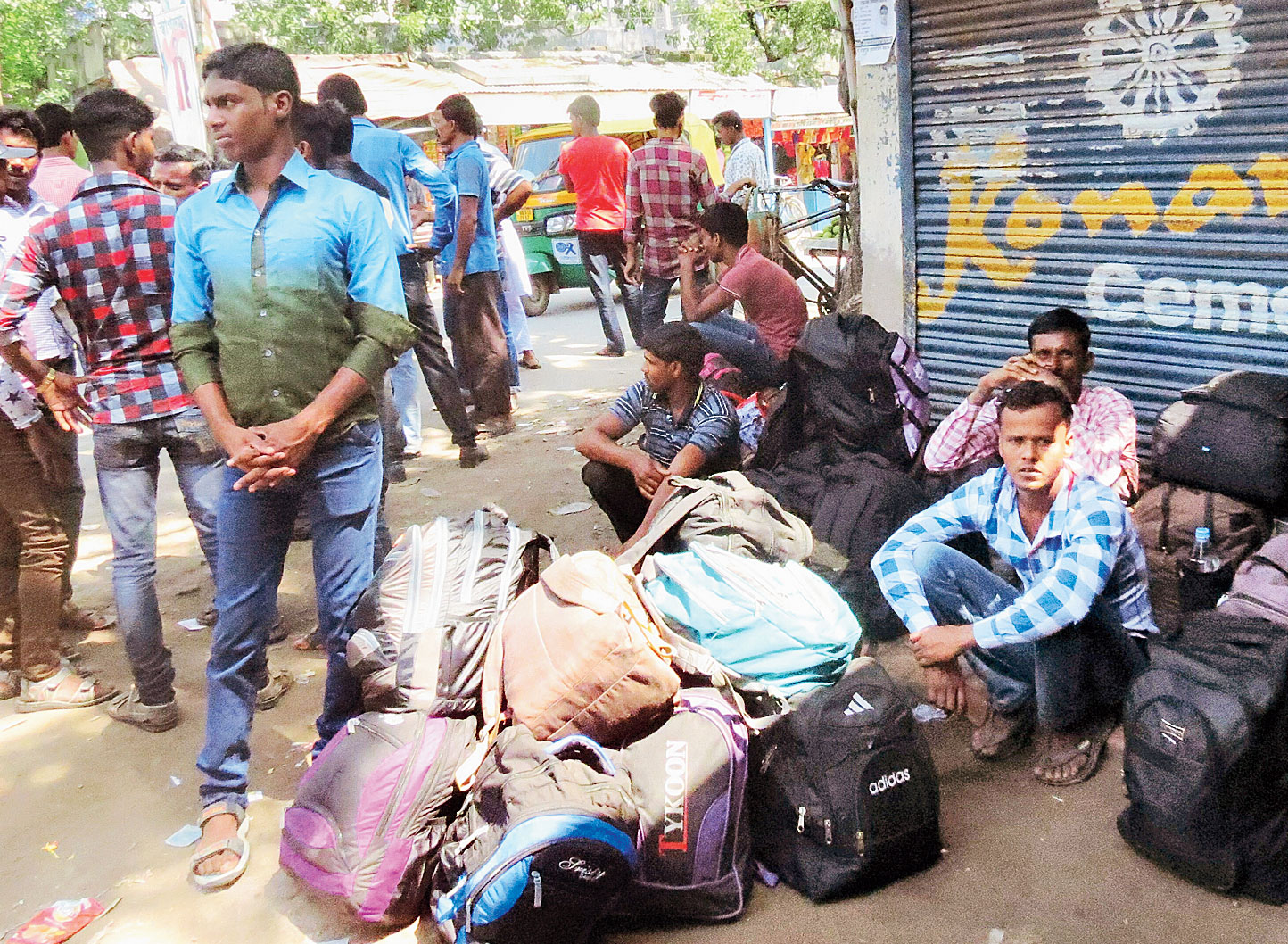 Labourers wait at Karimpur in Nadia to catch a bus to Calcutta for their journey to Kerala.
(Ashis Pramanik)
Subhasish Chowdhury & Alamgir Hossain   |   Calcutta   |   Published 07.10.18, 09:10 PM

Thousands of labourers from three Bengal districts have started streaming to Kerala for post-deluge reconstruction activities after dropping their plans to spend the festive season with their families.

The workers had returned home in Nadia, Murshidabad and Birbhum districts following the floods in Kerala in August. The urgent call from Kerala, coupled with the lure of higher wages, prompted them to change their plans to celebrate Durga Puja in the middle of October.

Bapan Saha, a labourer from Hariharpara in Murshidabad, had planned to spend Puja at home after three years. But he went back to Ernakulum on September 30, along with some other youths from the area.

“I had come home in the first week of September after a long time. I was trapped in Ernakulum during the floods. Although my plan was to go back after the puja, my recruiter called me repeatedly requesting me to join restoration works. Initially, I was quite reluctant to return, but I was forced to change my mind because of the repeated calls,” Bapan had said before he left home for Kerala.

Not only Bapan but several others this newspaper spoke to also said they were heading for the southern state.

Workers like Bachhu Seikh, Samad Sheikh and Rafiqul Sheikh — from Domkol, Jalangi, Nawada, Raninagar, Islampur of Murshidabad and Karimpur, Murutia, Hogolberia, Thanarpara and other places of Nadia — have already returned to Kerala though they had plans to spend the festive period in Bengal.

In rural areas, people belonging to all communities take part in Durga Puja, though its a Hindu festival.

Sources in the state administration have said thousands of youths from Nadia, Murshidabad and Birbhum districts work in Kerala and most of them had returned home following the deluge.

“The exact figure is not with us as there is no system in place to know how many people from Bengal are working in Kerala or other states,” said an official.

Sources in the labour department said most of the youths worked in Kerala or other states only because they got handsome packages.

“In Bengal, a mason can get Rs 500 a day at the most. But he will be paid Rs 800 in Kerala. The rate could be higher at this point of time as Kerala urgently requires workers for restoration works. So, it was not easy for the Bengal government to arrange alternatives for them,” said a source.

A labour supplier from Kochi, who recruits many from Bengal, said he had appealed to the labourers to come back at earliest as Kerala needed a huge workforce following the disaster.

“Over 10,000km of roads were damaged. Thousands of structures, including houses, need urgent repairs. All these require a huge number of labourers. So, we requested the labourers to come back and join work,” he said over the phone.

Sources said over 12,000 construction labourers from Murshidabad, Birbhum and Nadia had returned to their workplaces in Kerala, particularly the Ernakulum industrial belt, in the past few days.

According to Safiqul, after the devastation in Kerala, many construction labourers have shifted to Mumbai, Delhi or other parts of the country in search of work.

“If we want to bring them back to Kerala, we have to offer a higher wage. That’s why the wages are higher in the state these days,” he added.

Rohit Sheikh, a labourer from Karimpur in Nadia, said over the phone from Kochi that they wanted to spend the festive time with family this year but the higher daily wages forced them to join back to the work.

“Mainly cleaning works have begun. The agencies are offering daily wage of Rs 850 for a skilled mason and 650 for labourers. It is the right time to earn some money,” he said.