What makes a climate leader

Performance, rather than geo-political clout, will determine the next leader of climate change negotiations, the head of the country's top think tank on climate policies said on Wednesday. 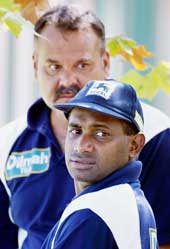 Calcutta: Performance, rather than geo-political clout, will determine the next leader of climate change negotiations, the head of the country's top think tank on climate policies said on Wednesday.

Ajay Mathur, the director general of The Energy and Resources Institute (TERI), said the US has become irrelevant in climate talks and the next leader will be the country that fulfils its commitment on carbon emission reduction

"The US has become irrelevant. The countries (those committed to the Paris climate agreement) have taken the onus on themselves to reduce emissions," said Mathur, while speaking on Climate: A new paradigm? as part of a THINK lecture at the Bengal Chamber of Commerce and Industry (BCCI), in association with The Telegraph.

"Countries that perform well in relation to pledges would assume the leadership in the coming days. New leadership will be based on performance rather than geo-political clout that the US enjoyed," said Mathur, also a member of the Prime Minister's council on climate change.

He was referring to Intended Nationally Determined Contribution - self-determined targets for greenhouse gas emission that all countries had to pledge. In the run-up to the 2015 climate conference in Paris, all countries had to publish their INDC to reduce greenhouse gas emission as part of the larger aim to restrict the temperature rise globally by 1.5 to 2 degrees Celsius compared to pre-industrial levels. The US, too, published its INDC under the then President Barack Obama but Donald Trump, after becoming the President, announced that the US would walk out of the Paris climate agreement.

In the audience were several present and current executives of private companies as well as PSUs. Also present was activist Bonani Kakkar and Craig L. Hall, the US consul general in Calcutta.

During his 40-minute talk that was followed by a question-and-answer session, Mathur spoke about how in the past five to six years climate issues have had a bearing on decisions related to energy. He spoke of a shift from top-down approach in the 90s to a stage where all countries have realised they have to pitch in. "The NDCs are an entirely different architecture," he said.

Mathur said even companies are now worried about how they are perceived and whether taking a climate- friendly approach will create a better impression about them.