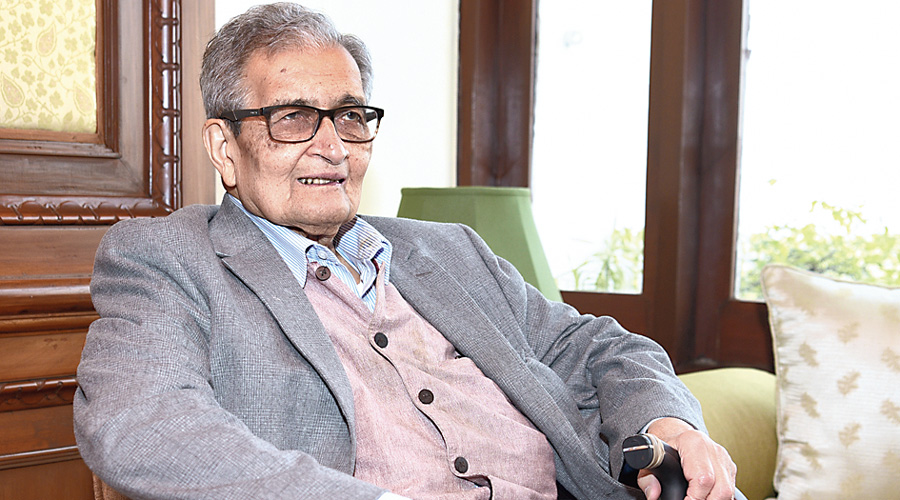 Economist and Nobel laureate Amartya Sen said this election had sharpened the communal divisions that Bengal’s luminaries, from Rabindranath Tagore to Netaji Subhas Chandra Bose, had “worked hard to replace with a peaceful understanding”.

“The fanning of the dangerous flames of communal divisions has not occurred as strongly in Bengal since 1946, as it is happening now,” Sen said in an interview to PTI.

“What Mahatma Gandhi did in the 1940s can be undone with a huge cost and sacrifice in Bengal, and this evil negation has unfortunately received much encouragement in this election. Bengal wants unity, not divisions — as Gandhiji so clearly explained.”

Bengal should not have to be a party to “that national degeneration”, Sen said, when asked if the Assembly elections would have a bearing on national politics. “If Bengal ends up being governed by central rulers, not local leaders, it will vastly strengthen the concentration of power in India in the hands of those whose conception of minority rights is extremely limited and whose record on economic policy and social justice seems seriously defective,” he said.

“The BJP-rule has not been particularly good for the country, with its huge neglect of the poor, mistreatment of minorities, messing up of the economy and mishandling of the Covid-19 crisis,” the economist said.

There are reasons to scrutinise sharply the priorities of the ruling party in India that makes them so single-mindedly concerned about winning the elections in Bengal, he added.

“The Mamata Banerjee government has taken a number of good initiatives, including the launch of its welfare programmes, especially the ones for girls. Also, the beneficial expansion of rural infrastructure (including much-needed rural roads), and very importantly a workable system of food security are worth appreciation,” the Nobel laureate said.

The fact that children in Bengal, despite their families having smaller incomes than, say, families in Gujarat, seem to have better health conditions than Gujarat’s children is a tribute to the governance in Bengal, Sen said.

“But there are gaps too that need to be addressed, including corruption check,” he added.

Asked about the “outsider-insider” debate launched by Trinamul’s description of the BJP as a party of outsiders, Sen said it is “certainly a bad thing” because Bengal has historically been tolerant to outsiders.

“There have never been movements against, say, Tamil or Malayali immigration into Bengal, unlike what happened in, say, Bombay. It is always unfortunate if anti-outsider criticisms have to be used — it is certainly a bad thing,” he said.

But, he argued, “when one of the major political contenders in the electoral battles portrays a part of the ‘insider’ population of Bengal — in particular, Bengali Muslims — as less deserving of support, while deriving their strength from the support of Hindu activists coming originally from outside Bengal, the dividing lines are hard to be kept pure”.

The reference was to the BJP’s campaign that has included branding of Muslims as Bangladeshis.

The “outsider-insider” issue demands a fuller political analysis and it is important to understand that “excluding resident outsiders is always a bad thing, but excluding resident insiders is far more illegitimate”, Sen explained.