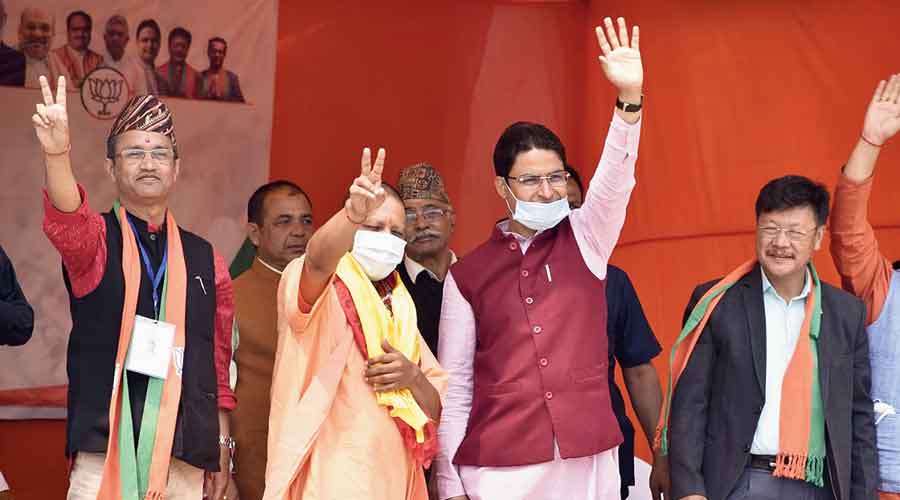 Standing atop the mountains of Kurseong, Uttar Pradesh chief minister Yogi Adityanath on Wednesday asked why a university should not be set up in the Darjeeling hills, unaware that his question would rebound on his party’s government at the Centre which had done precious little to meet this demand.

Addressing a public meeting at Monteviot Ground in Kurseong on Wednesday, Adityanath said: “Why shouldn’t a university be set up here? Had there been a good government here, a government with an intent for development …(the institution would have been set up).”

The Uttar Pradesh chief minister then boasted that two AIIMS and 30 government medical colleges were being set up in his state.

Adityanath, however, seems unaware that the Mamata Banerjee government had almost completed building infrastructure to set up a campus of Presidency College in the Kurseong Assembly constituency and that the state had also started the process for a Darjeeling Hills University with the governor having already selected a vice-chancellor.

The DHU is set to come up at Jogighat in Mungpoo which also falls within the Kurseong Assembly constituency.

The demand for the central university has not yet been met though it is listed in the memorandum of agreement of the Gorkhaland Territorial Administration as one of the projects to be taken up in the hills.

In 2015, a year after the BJP government had come to power at the Centre, the GTA submitted a detailed project report on the central university to the Union HRD ministry. The report was prepared by Noida-based EdCIL (India) Limited, a government of India enterprise. Faculty members of Sikkim University had also helped in preparing the report.

Instead of a full-fledged central university, the Centre instead proposed a campus of the Sikkim University in Darjeeling, a demand rejected by the GTA.

The other issues pertaining to the hills raised by Adityanath were promoting health tourism in the region, the loss of lives of (statehood) andolankaris, low wages in Bengal and land rights for tea garden workers and infrastructure developments.

Adityanath also reiterated that there had not been a single communal riot in his state in the past four years, a claim contested by many.

Adityanath, however, said his party was committed to solving the issues of the region, perhaps hinting at the BJP’s 2019 Lok Sabha election manifesto promise to find a “permanent political solution” for the hills.

In the hills where most political rallies end with “Jai Gorkha” and “Jai Gorkhaland” slogans, what reverberated at the Kurseong meeting of the UP chief minister were “Jai Shree Ram” chants.

Adityanath also attended two other public meetings, one in Kranti of Jalpaiguri district and another in Kaliaganj of North Dinajpur district.

“The Centre wants to construct a parallel bridge near Sevoke (to connect Siliguri with the Dooars) but the state government is not keen on the project. The resources in forests have been looted and nothing has been done to develop these areas,” he said at Kranti.

At Garalbari, on the outskirts of Jalpaiguri, Smriti said: “In Bengal, people have to pay cuts to Trinamul workers to avail themselves of benefits of any government scheme. The central government has provided funds for drinking water schemes but even now, people of Jalpaiguri drink impure water.”