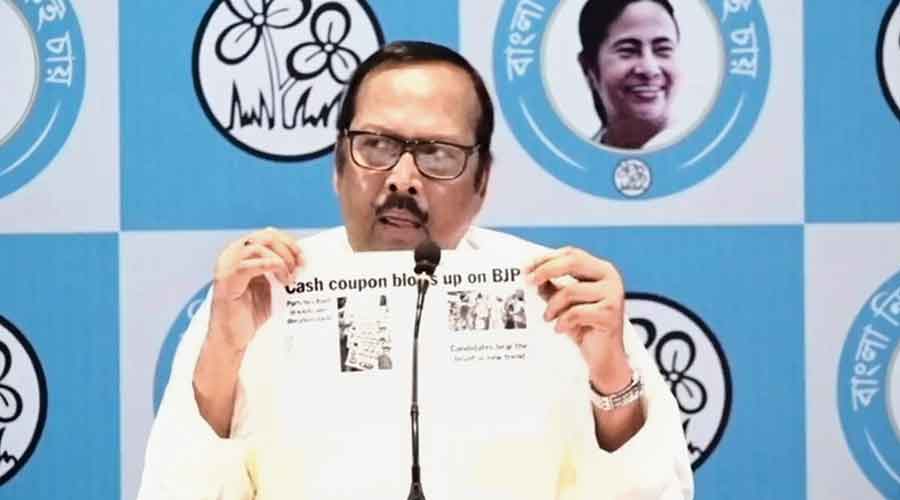 The Trinamul Congress on Wednesday lodged a complaint with the Election Commission of India and issued a statement lambasting the BJP over its  distribution of coupons that allegedly promise cash in exchange of attendance at Narendra Modi’s political rally and voting for his party.

Mamata Banerjee’s party, which has been accusing the BJP of such malpractice in Bengal since the Lok Sabha polls of 2019, placed the blame squarely on the saffron camp for introducing the concept to the state where it used to be “unprecedented and unheard of”.

“In various parts of South 24-Parganas, including Raidighi of Mathurapur, coupons have been distributed by BJP candidates and the organisation to voters asking them to attend the public meetings of Prime Minister Narendra Modi and vote for the BJP. Once they do it, they will be paid, on the basis of these coupons, Rs 1,000 per head,” said Trinamul Rajya Sabha member Sukhendu Sekhar Roy at a news conference at the Trinamul Congress’s headquarters in Calcutta.

The Telegraph carried a report on Wednesday on how such coupons had been distributed at Raidighi. The newspaper clipping was attached to Trinamul’s complaint with the commission.

“These coupons contain a photo of Prime Minister Modi, the name of the BJP, that of the Mathurapur organisational district of the party and the public meeting that was held on April 1,” said Roy.

“Such coupons are being distributed in various parts of South 24-Parganas and other districts of Bengal. We have already brought it to the notice of the Election Commission of India and we want immediate action to be initiated against this attempt on the BJP’s part to introduce cash for votes in Bengal, which used to be unprecedented and unheard of,” he added.

Sources in Trinamul, however, said it did not expect much by way of timely or necessary action by the commission.

“From what we have already gathered, the commission is not keen on pursuing this. We don’t expect anything better from this current commission anyway…. We will instead go big with this, to the people,” said a senior Trinamul leader.

Roy said the commission, with all its “lofty claims” on its intent to ensure free, fair and peaceful polls in Bengal, ought to step up now.

“The buck here stops with the ECI. It is the ECI’s responsibility to stop this, to ensure free, fair and peaceful polls…. Eight-phase polling, countless central forces, teams and teams of observers, fleets of helicopters and drones…. Why should it not investigate and act in this regard?” he asked.

The CPM, which lodged a complaint on the same matter with the commission, also sounded unhappy with the Nirvachan Sadan’s approach.

Seniors at Alimuddin Street said Shamik Lahiri had lodged the complaint on behalf of the CPM on Tuesday.

“Although the ECI had said it would probe the matter, nothing of that sort has happened,” said a CPM state secretariat member.

Trinamul said it had been receiving tip-offs from various quarters on the BJP spending cash for not only “buying” votes but also ensuring decent turnouts at Modi’s rallies.

“After this came to light from the newspaper report, we began the process of locating these coupons, and there have been thousands and thousands of them found already,” said Roy.

Bengal BJP vice-president Jay Prakash Majumdar has denied the charges. “Their allegations are baseless and they are free to go to the commission for redress,” he said.

Cash coupons blow up on BJP in Bengal