A music video created by some young and accomplished artistes, and featuring a few celebrated veterans, has been released to warn people against politics of hate 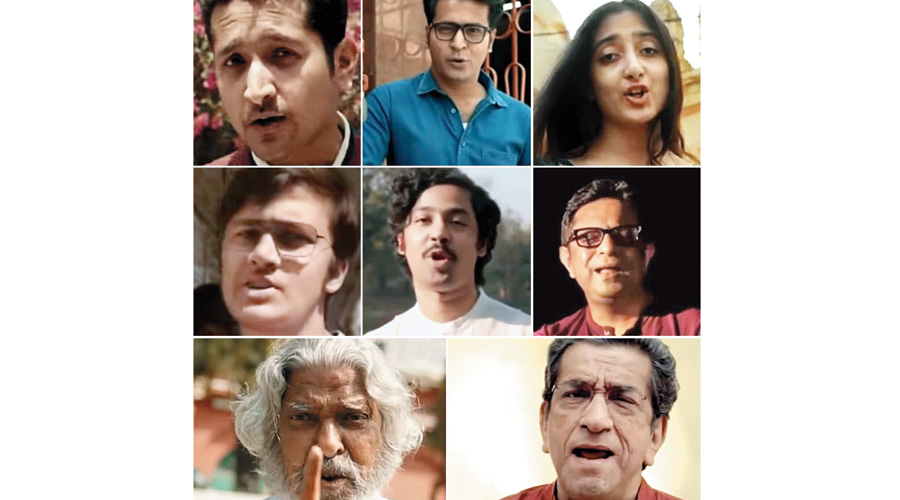 You bash education to satisfy the spite of the ignorant/ Your devotion is bloodstained, you love none….

You shout your hollow words louder and louder, the thicket of your lies hide the truth/ I spotted your reflection in Goebbels’s mirror/ I have seen the shark teeth, how venomous they are

These are lines from a music video created by some of Bengal’s young and accomplished artistes, and featuring a few celebrated veterans, with the aim of warning people against the politics of hate ahead of the Assembly elections.

A refrain keeps reappearing: “I am not going anywhere/ I’ll live in my country.”

The music video is the brainchild of three young actor friends who coaxed their elders into joining up, marking a rare display of defiance from a fraternity that is often accused of being too careful about image and career.

Several of those in the video are successful actors such as Parambrata Chattopadhyay, Anirban Bhattacharya and Riddhi Sen and composer-singer Anupam Roy and singer Rupankar Bagchi.

“We are not aligned with any political party but are opposed to a certain ideology — one that looks at things through a prism of polarisation. That ideology is being imposed on the country and in our state in the run-up to the elections. We urge people to resist that ideology,” Parambrata told The Telegraph on Thursday.

The cast members said they were aware of the risks but felt that they needed to act before it was too late. Anirban, who wrote the lyrics, said: “If a time comes when I’m denied work because I don’t subscribe to a certain ideology, I’m ready to face it.”

Anupam said he was “okay with not being considered for awards” as a possible retribution. “But I want to be clear to my conscience. I want to sleep in peace.”

Actor Rwitobroto Mukherjee and Riddhi directed the video. The two of them collaborated with Surangana Bandyopadhyay to write the screenplay.

Apart from a song that excoriates Right-wing politics, the six-minute film has visuals carrying messages from luminaries of the Bengal renaissance, such as lines from Sukumar Ray’s Abol Tabol that make fun of authoritarianism and Rabindranath Tagore’s vow to “never allow patriotism to triumph over humanity”.

The bit about Goebbels’s mirror is accompanied by images from Charlie Chaplin’s The Great Dictator. There are pictures of the February 2020 Delhi riots, showing a mob attacking a man who lies on the ground, hands covering his head.

Forming the backdrop are landmarks and spots emblematic of Calcutta, such as College Street, the Chinese Kali Temple in Tangra, St Paul’s Cathedral, Nakhoda Masjid and Gyan Manch.

Right at the start, two paragraphs appear on the screen, setting the tone.

“Our country, India, is a land of diversity and love, a country of togetherness. We have to speak out if there is an attempt to foster falsehood and hatred,” it says.

“Bengal is the land of friendship, peace and pluralism. If someone tries to drive a wedge between people here, it’s imperative as an Indian, as a Bengali, to resist the attempt. We shall look hatred in the eye and say, ‘This is not your country, this is the country of love, this is India’.”

Visuals of posters follow, before a young girl is seen selling a balloon to a young musician on a roadside.

Then comes the opening song, which goes: “Ancient texts are history to you; and history to you is dated. You bash education to satisfy the spite of the ignorant. Your devotion is bloodstained, you love none. You are here to rule the nation, yet you know nothing of patriotism.”

The video names no political party but flashes pictures of purported newspaper reports and headlines on events and policies attributable to Right-wing politics and BJP governments.

Examples: the birth anniversary celebrations of Nathuram Godse, the RSS refusal to hoist the Tricolour, India’s slide down global freedom indices, Internet curbs in Kashmir, the torture of Dalits, Yogi Adityanath’s anti-women comments and atrocities on his watch, and the Rafale controversy.

The video highlights issues like the farmers’ protests, fuel price hike and the horrors of demonetisation.

The Narendra Modi government’s favourite target finds a mention: “All your explanations begin and end with Pakistan....”

Some of the actors display a copy of the Constitution with a picture of B.R. Ambedkar on its cover. Some are seen tearing up sheets of paper inscribed with Right-wing slogans and terms such as “anti-national”, “Go to Pakistan”, “urban Naxal”, “achchhe din” and “Cow urine cures cancer”.

The unequivocal assertion that “I am not going anywhere/ I’ll live in my country” is a reminder of the protests against the new citizenship matrix, the backdrop against which the song was written.

“Anirban Bhattacharya wrote the lyrics a year ago. We wanted to make the music video at the time but the lockdown stalled everything,” Riddhi said. “We renewed our effort now because of the atmosphere being created before the Bengal elections. Voting is a personal choice and we cannot interfere there, but we can highlight the dangers of majoritarianism.”

Anirban said a “political conspiracy” had prompted him to write the song last year.

“Artists speak, react and protest through their own medium — films, theatre, music, poetry and so on. But there has been an attempt to destroy that medium of protest,” he said.

Some actors and directors who have been openly critical of the Modi government have faced a barrage of online abuse and, sometimes, income-tax and Enforcement Directorate raids.

The coming together of so many leading artistes to make the music video is a throwback to civil society’s involvement in the 2007 Nandigram movement against the Left government of the day.

Theatre and film veteran Koushik Sen, who was part of the Nandigram movement and is featured in the latest video, was forthright.

“Autocratic governments come and go, but the current regime at the Centre is unlike any previous tyrant,” he said.

“People, a section of our fraternity included, are still looking at the BJP as just another party. But they (the BJP) are far more dangerous. The upcoming election will be a battle for the soul of Bengal.”

Rudraprasad Sengupta, 86, said he participated in the video after being approached by a “bunch of kids”.

“The video is self-explanatory. My participation is a reflection of my approval of the video’s message,” he said.

The video ends with the little balloon seller entering an auditorium where the artistes are singing in chorus, which she interrupts with the lines: “I am not going anywhere/ I’ll live in my country India.”

She rushes on stage. Someone takes the balloon off her hand and gives her a national flag. Another hands her a copy of Tagore’s play Raktakarabi or Red Oleanders, which is about freedom from tyranny.

A few lines from the Preamble to the Constitution float into view before the light gradually fades.