Alleging irregularities in counting led to the defeat of Mamata, angry supporters decided to keep the centre under siege till their demand is met 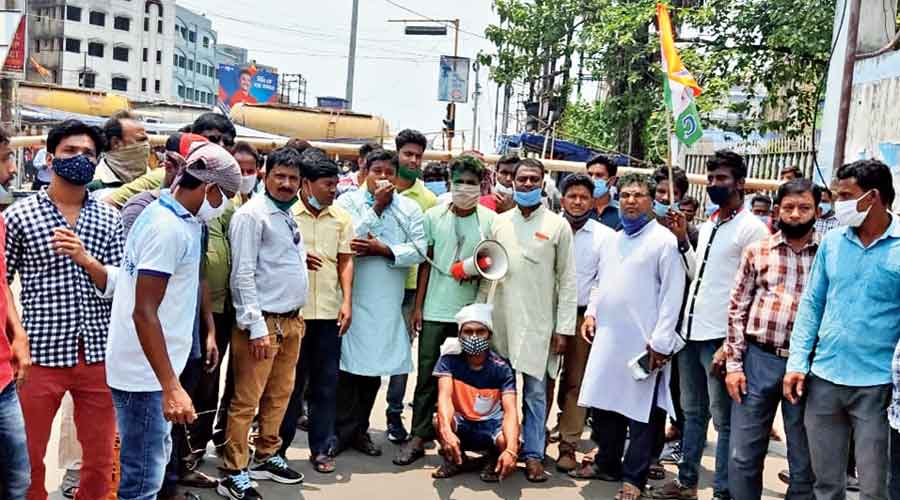 Trinamul workers block the road near the centre where Nandigram votes were counted
Telegraph picture
Anshuman Phadikar   |   Haldia   |   Published 04.05.21, 01:49 AM

Around 1,000 Trinamul supporters continued to lay siege to the counting centre in Haldia after a demand for recounting votes of Nandigram Assembly constituency by the party was rejected by the Election Commission late on Sunday.

Alleging irregularities in counting led to the defeat of Mamata Banerjee, angry Trinamul supporters decided to keep the counting centre — Haldia Government Sponsored Higher Secondary School — under siege till their demand for fresh counting is met.

They said the agitation would continue and EVMs won’t be allowed to be shifted from the counting centre as they fear tampering.

Barely 300 metres away, a hundreds of party supporters have kept the Haldia-Mecheda state highway blocked for over 24 hours, stalling movement of vehicles, including oil tankers.

On Sunday evening, Mamata Banerjee lost the prestige fight to her one-time aide-turned-BJP candidate Suvendu Adhikari in Nandigram seat by a slender margin after several confusions.

Angry Trinamul supporters began a demonstration and raised slogans. They also gheraoed officials and refused to vacate the place despite repeated pleas by the district administration in the wake of Covid protocols.

Adhikari tasted their wrath when he arrived at the counting centre to receive the winning certificate around 10pm on Sunday.

Some Trinamul workers hurled stones at him and vandalised his car. State and central security officials took him out of the counting centre.

“A conspiracy was hatched by the Centre and the EC to defeat Mamata Banerjee. We do not accept her defeat. We will not withdraw the protest till a recounting is ordered by the EC,” said Trinamul’s youth wing leader Suprakash Giri.

“Right from the start, counting of votes was stalled many times for mysterious reasons. This grossly delayed the counting for over three hours. It appears that the officials in connivance with the BJP and the Centre deliberately worked to defeat Mamata Banerjee. We demanded recounting, but the EC rejected it.  So, we were left with no option but to protest till recounting happens,” Giri said, adding party workers won’t allow officials to shift the EVMs.

“As a conspirator he (Adhikari) does not deserve rosogolla,” he added.

Mamata’s election agent Sheikh Sufian said: “We were persuading the returning officer Kishor Biswas for recounting. He may have agreed. But the observer persuaded him not to agree to a recounting and to issue a winning certificate immediately.”

Returning officer Biswas refused to talk on the issue.

The BJP termed Trinamul’s agitation a bid to divert people’s attention to the “embarrassment of Mamata Banerjee’s defeat”. Newly elected BJP MLA from Haldia Tapashi Mandal said: “I hope good sense prevails among the Trinamul leaders to accept her defeat in the right spirit.”

The BJP also accused Trinamul of crowding the counting centre and the road amid the pandemic’s second wave.

At least 50 persons were injured in political clashes between the BJP and Trinamul supporters in twin Midnapore districts in the past 24 hours. Police and sources of both parties claimed many houses were ransacked in Nandigram, Khejuri, Contai, Panskura, Pingla, Sabang, Garbeta, Keshpur and others.

East Midnapore SP Sunil Kumar Yadav said: “We have 13 companies of special force. We have taken action wherever required and arrested people.”