Sitalkuchi: Villagers question EC on not sending representative after tragedy

Most of them are high school dropouts with little idea about the outside world, but they are aware that the poll panel is supposed to be a neutral entity 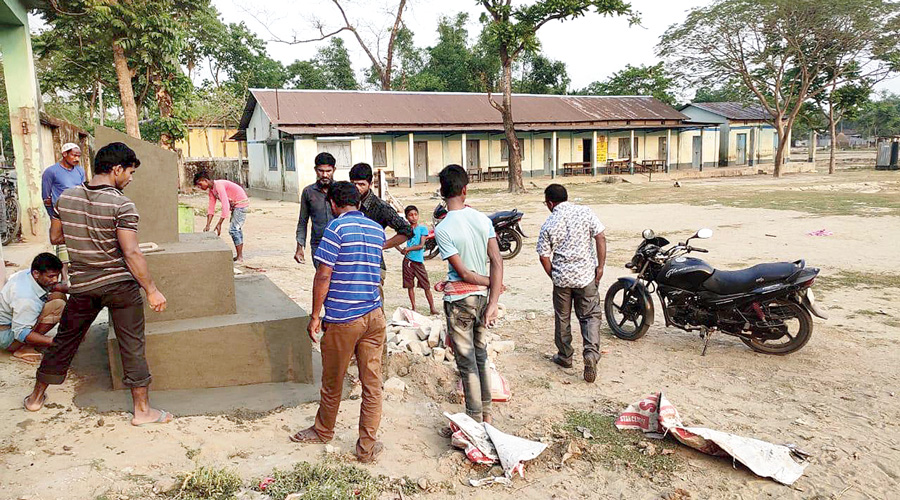 Youths build on Monday a memorial to the four who were killed in the CISF firing. The structure is located near the polling booth at Jorpatki in Sitalkuchi.
Main Uddin Chisti
Main Uddin Chisti   |   Cooch Behar   |   Published 13.04.21, 02:34 AM

The residents of Sitalkuchi’s Jorpatki have a question for the Election Commission: why did it not send any representative to the village after the deaths of four voters in CISF firing, unlike its prompt action when a BJP politician was found dead in the same district?

Most of the villagers The Telegraph spoke to said they were high school dropouts with very little idea about the outside world, but were aware that the poll panel was supposed to be a neutral body.

“A few days ago, a BJP leader was found dead in Dinhata town. Immediately, the Election Commission ordered an investigation and sent the special police observer to Cooch Behar to conduct an inquiry and submit a report,” said Mortuza Mian, a local youth.

“On Saturday, four young men from our village lost their lives in firing and yet not a single representative of the poll panel has paid a visit,” added Mortuza, who was injured when the CISF baton-charged villagers on the polling booth premises ahead of the firing.

Amit Sarkar, 50, Dinhata town block president of the BJP, was found hanging at a veterinary hospital in the town on March 24, prompting BJP allegations of murder by Trinamul goons.

It despatched Vivek Dube, the special police observer deputed to Bengal, to Cooch Behar. He spoke with administrative and police officials besides visiting the spot in Dinhata. He then filed a report with the Election Commission saying Sarkar had committed suicide.

“Four young men died in Jorpatki and another young man elsewhere in Sitalkuchi (Ananda Burman, hit by a bullet during a political clash), yet no one has been sent to conduct an inquiry. This has again raised questions over the poll panel’s neutrality.”

Another senior Trinamul leader flagged how the report on the firing by Dube — who did not visit Cooch Behar this time — had got the names of all the four slain youths wrong.

Joved happens to be the name of Nur Alam’s father, while Maniruzzaman’s father is called Amzad.

“All the names were wrong. In some cases, their names were mixed up with their fathers’ names. We doubt how serious the commission is about the case,” the Trinamul leader said.

The Trinamul leader underlined that the authorities had so far not revealed the contents of the report by the presiding officer, who is supposed to write a detailed account of whatever happens in his booth through the polling day.

“Nor have the families been provided with the post-mortem reports. We suspect it’s an attempt to suppress facts, for the photos of the victims indicate they were shot in upper parts of their torso,” the Trinamul leader said.

Kavita Krishnan, politburo member of the CPIML Liberation, has underscored some of the inconsistencies in a complaint to the Election Commission.

Krishnan referred to the injuries suffered by Mrinal Haque, 15, who has said he was assaulted by a central force jawan. The assault is considered the flashpoint that led to the firing.

“The injuries on Mrinal’s body give the lie to the police observer’s report to the EC, that Mrinal had fallen sick, and that onlookers mistakenly assumed he had been beaten by jawans and assembled a violent mob which attacked the CISF,” Krishnan said in her complaint.

“Even the CISF has not claimed that the victims came to the poll booth armed. Had they in fact been planning violence, they would have been armed — they came unarmed because they came to cast their votes. It is inconceivable that four unarmed persons would suddenly seek to snatch rifles from CISF men — knowing full well that they were vastly outnumbered by a CISF battalion armed to the teeth.”

Questions have been raised also at the authorities’ silence on footage from the CCTVs at the booth.

While administrative officials have remained tight-lipped on the subject, the district police said the villagers had taken away the security cameras and ancillary equipment.

The villagers denied the charge, saying the police had removed the CCTV cameras.

“It’s a false allegation. We ran for our lives; how can anyone wrench off CCTVs at such a time?” said Abdul Aziz Kazi, a Jorpatki resident.

“We don’t know whether the Election Commission will conduct any probe. So far, only a few local policemen have visited the village and spoken to some people.”

CPIML Liberation’s Krishnan also said in the complaint to the Election Commission: “We want to know why the EC has accepted the CISF version without demanding evidence to back the story. Surely there must be CCTV footage, or other videographed evidence of the CISF claims.”

The Telegraph had sought the Election Commission’s response to the questions raised by Krishnan and the complaints filed by others about the Sitalkuchi incident but no response had been given till 11pm on Monday.

The villagers have built a concrete memorial to the dead near the booth.

“We hope Mamata Banerjee will unveil it when she visits our village,” a resident said.

‘Will never forget such cold-blooded murder’