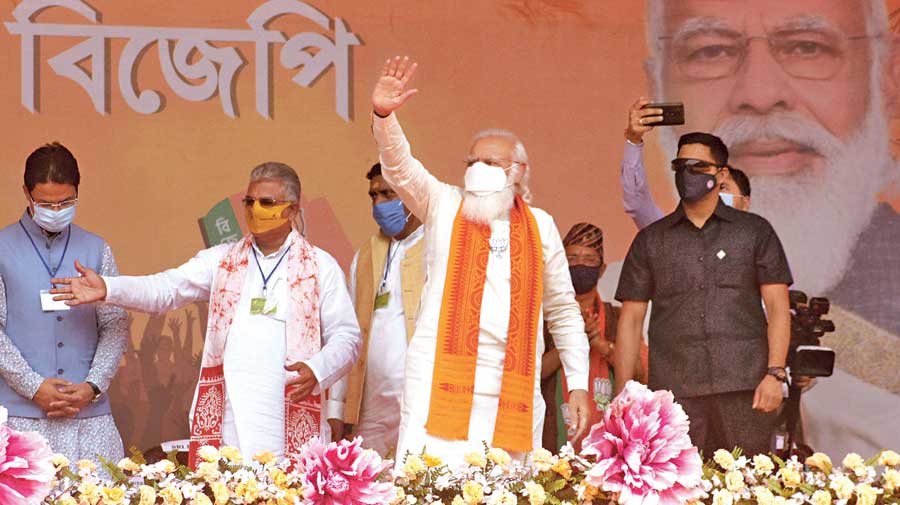 Prime Minister Narendra Modi said here on Saturday that he was saddened by four deaths because of firing by the central forces, but sticking to his campaign theme this poll season, blamed Mamata Banerjee for the loss of lives in Cooch Behar’s Sitalkuchi and criticised her brand of “appeasement politics”.

“What happened in Cooch Behar was really sad....My condolences are to their families,” said Modi at rally in Kawakhali in Siliguri, around 180km from where the incident took place during the fourth of the eight-phase Bengal elections.

But even before his message condoling the Cooch Behar deaths could trickle down to the large crowd — police estimated around 50,000 and the BJP over a lakh — that had gathered at the venue, the Prime Minister launched a scathing attack on the Bengal chief minister.

“The huge public support in favour of BJP has rattled Didi. Realising that she is losing her chair, she has stooped to a new low,” said Modi, trying to link Mamata’s recent tirade against the central forces with Saturday’s tragic incident.

The contents of Modi’s address made it clear that he was ready with a narrative to turn the tables on Mamata, and also use the incident, in which four Muslim youths lost their lives, to further the party’s polarisation agenda in Bengal.

“Didi’s goons can’t do chappa vote the way they did in the (2018) panchayat polls...Didi, this violence and the instigation by you to stall the poll process will not save you,” said Modi.

“She is giving training to her chappa vote gang in rallies on how to gherao the central forces, how to beat them up, how to carry out attacks on booths...Do you know of any chief minister doing such things?” he asked.

By posing this question, Modi tried to argue that the central forces could have opened fire after people, instigated by Mamata, attacked them.

Modi rose to address the gathering in Siliguri around two-and-a-half hours after the incident.

The Cooch Behar incident during the poll process, multiple BJP leaders said, became a cause of concern for the saffron ecosystem as this is the first time in recent memory that people have lost their lives from firing by the central forces that report to the Union ministry of home affairs.

Later, a note that special police observer Vivek Dube sent to the Nirvachan Sadan (the Election Commission office) also argued that the central forces opened fire only after they were attacked by a mob that didn’t disperse even when the forces had fired in the air.

“I urge the Election Commission to take stern action against those behind this incident,” Modi said in the rally.

But that plea to the poll panel was also followed by his claims that the BJP was set to sweep the polls in Bengal and that would bring an end to Mamata’s “appeasement politics”.