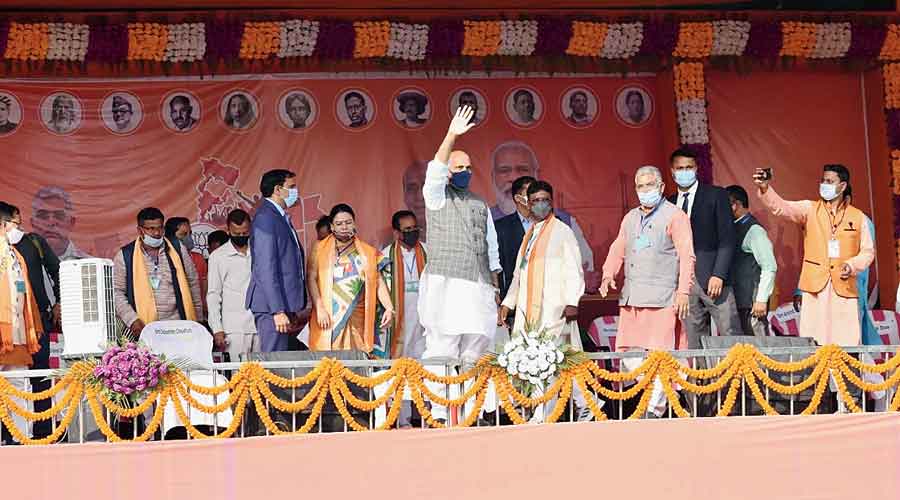 Defence minister Rajnath Singh on Friday referred to the Indian Air Force’s strike at militant launch pads at Balakot in Pakistan and the army’s stand-off with China in Ladakh as he sought to whip up sentiments ahead of the Assembly polls.

The BJP leader was in South Dinajpur to speak at a public meeting as part of the party’s Parivartan Yatra.

“Two years ago, it was on the same day that our forces had carried out the Balakot air strike. We have proved that we continue to fight extremist forces. On the India-China border, our army had given an apt reply last year and let me assure you that our borders are safe. We are taking all appropriate steps in this regard,” Singh said in Balurghat.

The Balakot air strike had been carried out on February 2019.

The defence minister referring to the air strike and the standoff in the Galwan Valley of Ladakh is an indication that the BJP plans to stoke voters’ sentiments, particularly in areas close to the international borders. The South Dinajpur district shares border with Bangladesh.

Singh also underscored that the BJP was determined to stop trans-border smuggling, human trafficking and infiltration and emphasised that the central government would fortify the India-Bangladesh border by raising additional outposts of the security forces and fencing more areas on the frontier.

“On a number of occasions, people living near the international border flagged a number of problems which they faced in their areas. The problems include anti-social activities as well as highhandedness of security forces. It seems Rajnath wanted to consolidate the support of those living near the border,” said an observer.

At the meeting, the defence minister was critical of the Trinamul Congress government also.

“Ma, Mati, Manush……… none is safe here these days. To expedite development in any state, maintenance of law and order is an important perquisite and it is absent from Bengal. We want to make it clear that if the BJP is voted to power, there will be no bombs,” he said.

Singh also accused Trinamul of prioritising politics over people. “There are some people who are into politics only to form government and lack proper plans and vision. Such attitude leads to political violence and corruption,” the BJP leader said.

The saffron brigade has been focussing on north Bengal, the region from where it could win seven of eight Lok Sabha seats.

As the Assembly polls are drawing near, many prominent leaders of the party, including Union home minister Amit Shah and party chief J.P. Nadda, have started visiting the region.

That the BJP is desperate to retain its support base — it was ahead in 38 of 54 Assembly segments in the 2019 Lok Sabha polls while Trinamul led only in 12 segments — was evident from the defence minister’s speech.

“You have voted for us in Balurghat and altogether, people of Bengal have given us 18 of 42 Parliament seats in 2019. This mandate has marked the commencement of a new political chapter,” said Singh.