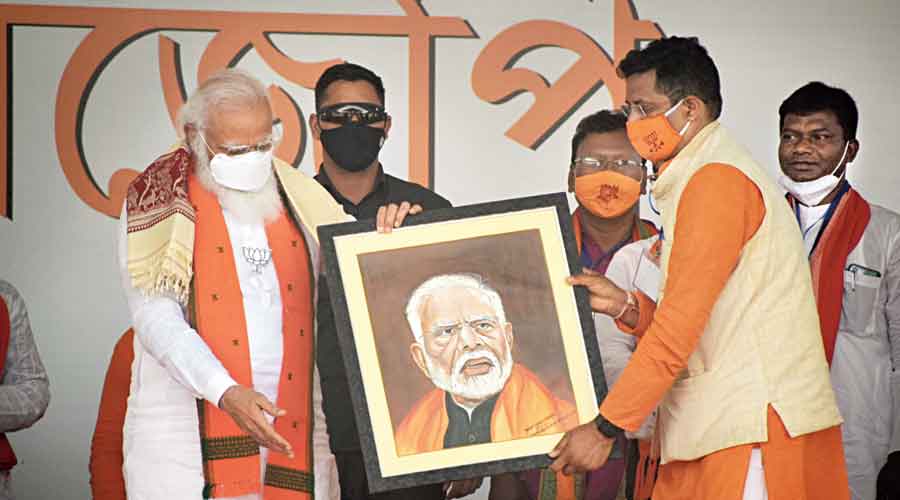 Prime Minister Narendra Modi gets a portrait of himself from party colleague Saumitra Khan, the MP from Bishnupur, in Bankura on Sunday
Rupesh Khan
Snehamoy Chakraborty   |   Bankura   |   Published 22.03.21, 01:03 AM

Narendra Modi on Sunday said that for the Bengal polls, the BJP had fielded both experienced and new faces to work towards building Sonar Bangla, the Prime Minister’s comment coming in the backdrop of protests by party workers across the state ever since the second list of candidates came out on March 14.

Many party offices were ransacked or set ablaze by local BJP leaders accusing the party of nominating several Trinamul turncoats and “outsiders” with no link to the Assembly segments concerned. Many questions how “asol poribarton” would happen under Trinamul turncoats, who till they switched sides were allegedly attacking BJP workers.

Though Modi did not refer to these protests, he spoke about BJP’s candidate from Bankura’s Saltora, Chandana Bauri, the wife of a mason, apparently to send the message that his party had picked names from the grassroots, not just turncoats.

“Didi, you may dislike my face but you will have to remember faces like Chandanaji and many more from the BJP for a long time.... Chandanaji is not only a BJP candidate from Saltora Assembly constituency but also the face of Bengal’s aspiration,” Modi said to a crowd of over 50,000.

Chandana said that she and her husband had started working for the BJP after they were not allowed to cast their votes in the 2018 panchayat polls.

“I have been working for the BJP for the past three years after we saw how Trinamul robbed us of our voting rights. The government housing scheme that came for me was given to another woman with the same name as mine. I did not know that the party had chosen me as a candidate till the list was announced,” said Chandana.

Modi referred to Chandana as a symbol of development and a victim of Trinamul.

BJP insiders said other than Chandana, the party’s candidate from Ausgram in East Burdwan, Kalita Maji, worked as a domestic help.

BJP leaders said Modi through his reference to Chandana’s candidature tried to douse the flames of protest against the choice of nominees.

“It seems that Modiji wanted to mean that Trinamul defectors were experienced hands and a balance had been struck by choosing freshers like Chandana as well. However, candidates like Chandana are very few,” said a BJP leader.

However, BJP leaders said despite the Prime Minister citing Chandana as an example, there were people like Tanmoy Ghosh who has been made a candidate within 24 hours of quitting the Trinamul to join the BJP. Ghosh will contest as the BJP’s candidate from Bishnupur in Bankura.

Modi in his speech also accused Trinamul leaders of making money through extortion and pilferage of sand.

He said the illegal money had helped Trinamul leaders in Bankura become rich and own big houses and branded cars. Modi also criticised Trinamul for a wall graffiti that showed Mamata’s fractured leg placed on the head of the Prime Minister. The graffiti had gone viral on social media and attracted Modi’s attention.