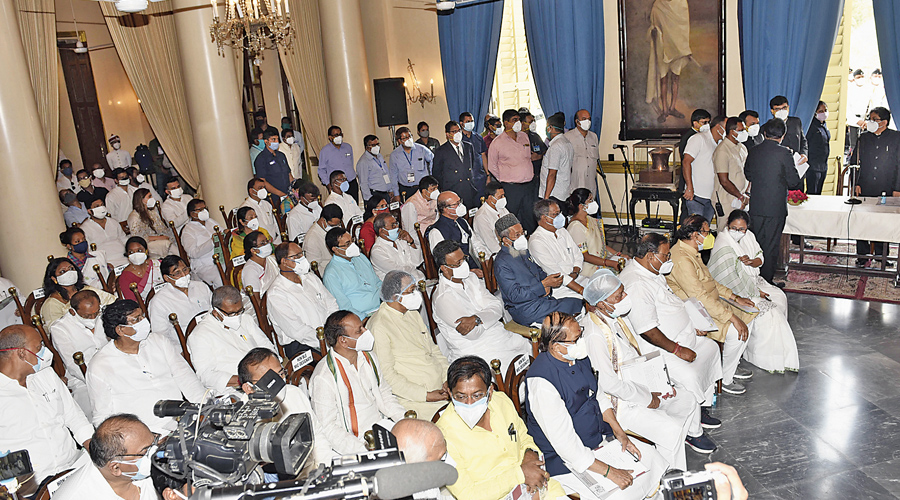 Mamata Banerjee with new ministers at the Raj Bhavan in Calcutta on Monday.
Picture by Bishwarup Dutta
Pranesh Sarkar   |   Calcutta   |   Published 11.05.21, 02:08 AM

Mamata Banerjee has brought back Partha Chatterjee as industries minister and Bratya Basu as education minister and given the shape of her third cabinet in a manner that reminded many of her first ministry after the change of guard in Bengal in 2011.

The chief minister allocated berths to her 43 ministers after convening the first cabinet of her third term at Nabanna on Monday. They were sworn in three batches by governor Jagdeep Dhankhar around 10.45am on Monday because of Covid-19 protocols.

Three ministers — Amit Mitra, Bratya Basu and Rathin Ghosh — took oath of office and secrecy virtually. Mitra has been unwell for some time, while Basu and Ghosh are recuperating from Covid.

Mamata continued with her trusted lieutenants in their departments that they had been holding since the first cabinet. For example, Amit Mitra was allotted the finance department, while Subrata Mukherjee got the panchayat and rural development department.

Another senior minister, Moloy Ghatak, will continue with the land and judicial departments. He has been given an additional responsibility of the public works department.

Arup Roy, also a senior minister, has been given the charge of the cooperation department which he has been in charge of since 2011.

Two members of Mamata’s first cabinet when they were in the Congress, which was an ally of Trinamul in 2011, were sworn in on Monday. Manas Bhuniya, the Trinamul MLA from Sabang in West Midnapore, has been appointed as water resources investigation minister, while Sabina Yeasmin has been made the junior minister in irrigation and north Bengal development departments.

“The way the chief minister distributed berths, it reminds me of her first cabinet. Many of the ministers were given responsibilities which they discharged in the first cabinet or continued to work in the departments since 2011,” said a Trinamul insider.

Another senior minister, Aroop Biswas, was sent to the power department from the PWD which he was looking after in the last government. Similarly, Sobhandeb Chattopadhyay has been made agriculture minister.

Jyotipriyo Mallick, the food and supplies minister in the last government, is the new forest minister.

Although Mamata left the charge of the minority affairs department, she would continue to hold departments like home and hill affairs, personnel and administrative reforms, health, land and land reforms, information and cultural affairs.