Dominance of mainstream parties, voters worry about regionalism taking a back seat 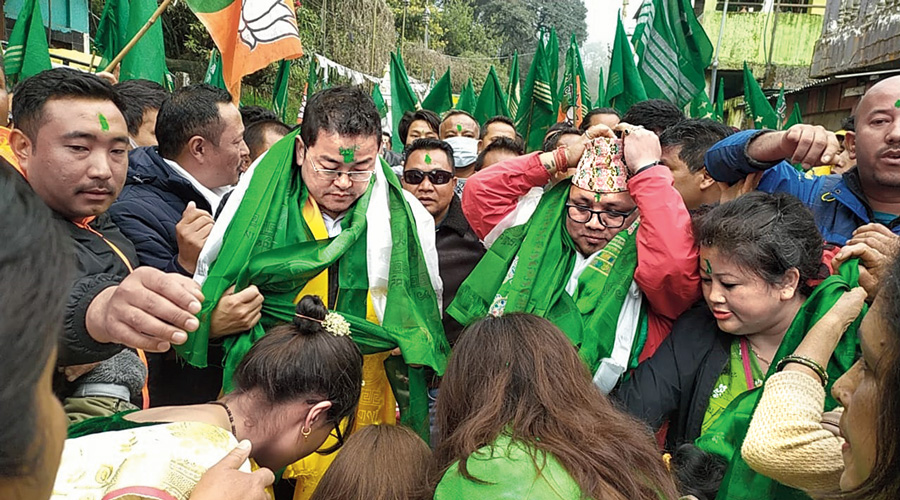 Neeraj Zimba, the BJP candidate of Darjeeling, with GNLF leader Ajoy Edwards, at Sukhiapokhri on the outskirts of Darjeeling town on Friday.
Telegraph picture
Vivek Chhetri   |   Darjeeling   |   Published 10.04.21, 01:22 AM

Across the hills of Darjeeling, this poll season — the first where Gorkhaland is missing as a poll issue and regionalism has taken a back seat — comes with marked confusion and far-reaching implications.

This marks a sharp contrast to past “routine” Bengal Assembly elections here.

The hills elect only three of the 294 legislators in Bengal Assembly. One of the tallest political figures in the hills, Subash Ghisingh had once remarked that the job of hill MLAs was just to chew paan in Calcutta.

Since 1986, when Gorkhaland agitation started, regional politics, with little influence from mainstream politics, has largely charted the political direction of the hills.

However, this 2021 Bengal election is challenging regionalism and Gorkha identity politics. The fight is not just for three MLA seats but about the fate of the regional parties and Darjeeling-centric issues.

But in this all-important election, the permutation and combination before a hill voter are mind-boggling.

Ghisingh’s party, the GNLF, now headed by his son Mann, had wanted the BJP to support their party in at least two of the three seats. Similar aspirations were aired by BJP ally, the CPRM.

However, the BJP announced their candidates for the three seats and asked GNLF leader Neeraj Zimba to contest on a BJP symbol from Darjeeling.

The other camp in the hills, led by Trinamul, has left the three hill seats for its “friends” — the two factions of the Gorkha Janmukti Morcha headed by Bimal Gurung and the Binay Tamang-Anit Thapa duo.

The electoral complexities do not end here.

The oldest party in the hills, the Akhil Bharatiya Gorkha League (ABGL), is now divided into three factions. One of the factions has decided to support BJP and the two other factions have fielded candidates against each other.

The present political matrix in the hills has reached such a situation that Harka Bahadur Chhetri’s Jana Andolan Party (JAP) has decided not to contest this election.

“We do not want to divide the votes further. We ideally would have wanted both the factions of Morcha to put up a united fight,” said Chhetri, aware of the futility of his wish.

The issues raised by political parties are also vague.

The BJP and GNLF are talking about finding a “permanent political solution” for the region, whose definition is still unknown to the general public.

The Gurung camp has started talking about a “state within a state”, a provision incorporated for Assam, while Tamang wants an All India Gorkha Assembly, a provision non-existent in the Constitution.

The separate statehood demand of Gorkhaland, which would find mention even in hill civic elections, is missing in action in the Assembly elections for the first time in decades.

GNLF president Mann Ghisingh said that the decision to support BJP was an attempt to rise beyond party-based politics. “We have risen above the party in taking this decision (to support BJP). It is for our future generations.”

Everyone knows that the real fight among the hill parties is to stamp their dominance in hill politics. “But in this process the lurking question is whether regionalism has gone for a toss,” said a hill voter. In the past, hill parties did have tacit understanding with mainstream parties but “now the regional parties are fully dependent on them,” a voter said, refusing to be named for fear of being identified.

Earlier, the dominant hill party would sail through Assembly elections but this time all parties are slogging for their existence. The two Morcha factions and the GNLF have been forced to walk on crutches provided by mainstream parties, a situation “unthinkable” earlier.

Gurung, who came out in the open after being on the run for three-and-half-years, is desperate to prove he still commands the support of the hill people. A loss in this election would mean an irreparable damage to his party.

Tamang-Thapa have lost past two elections despite being in charge of the hills after their nomination at the GTA. “A third straight loss would be a disaster now that two of their rivals are with Trinamul and BJP,” said an observer. The GNLF has also been out of power for 14 years.