Ajoy Edwards, who had so far been almost choking up in every other speech while saying Zimba was a ‘losing candidate’ for GNLF-BJP, on Monday smiled and hugged him 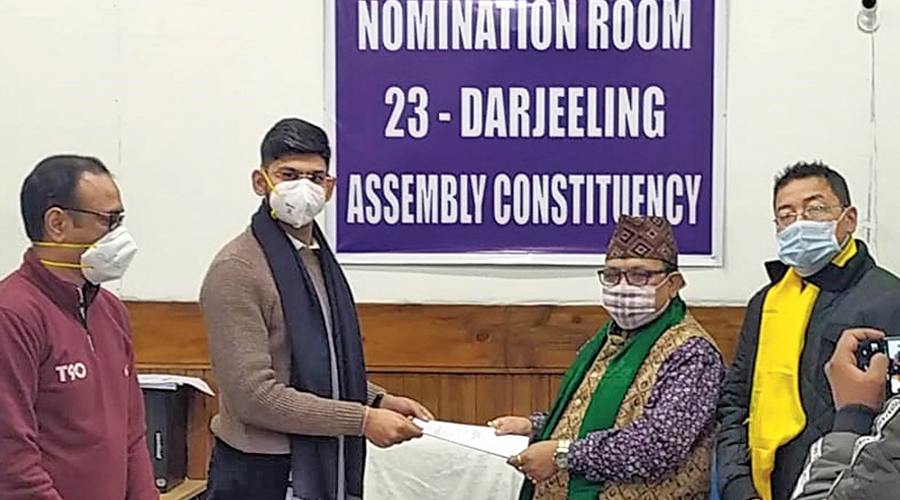 On Holi, the predominant conversation across Darjeeling was on hill politicians changing colours in the ongoing festival of democracy, the Bengal elections.

Ajoy Edwards, owner of Glenary’s, the most prominent eatery in the hill town of Darjeeling, who had so far not been accepting the GNLF’s decision to field a “losing” party candidate on a BJP symbol (sitting MLA Neeraj Zimba) till very recently, changed his mind on Monday.

Edwards, who had so far been almost choking up in every other speech while saying Zimba was a “losing candidate” for GNLF-BJP, on Monday smiled and hugged him. Edwards also accompanied Zimba as the latter went to file his nomination papers.

“Can we trust the current lot of hill politicians?” asked a political watcher from the hills. “Can they first take a stand, discuss and decide and then make public their views?”

The CPRM, which had earlier decided to field their own candidates from the three hill seats of Darjeeling, Kalimpong and Kurseong, on Monday decided against it.

The party justified this support to the BJP on the grounds that they would stick with the saffron ally GNLF till 2024.

However, many CPRM leaders were not convinced with this sudden change in political stance by “central leaders” of the party headquartered in Darjeeling .

On Monday itself, CPRM leader from Kalimpong Kishore Pradhan said that they would neither “vote for the BJP nor support the BJP” in the upcoming elections.

“We cannot accept this decision (to support the BJP) and the Kalimpong regional committee (of the party) will not vote for the BJP,” Pradhan, who had been named a CPRM candidate from Kalimpong, said.

There was no immediate reaction from the CPRM central committee leadership to Pradhan’s announcement.

“Political developments during the festivity of Holi definitely suggest that hill leaders are comfortable changing colours unlike the hill people,” said an observer.