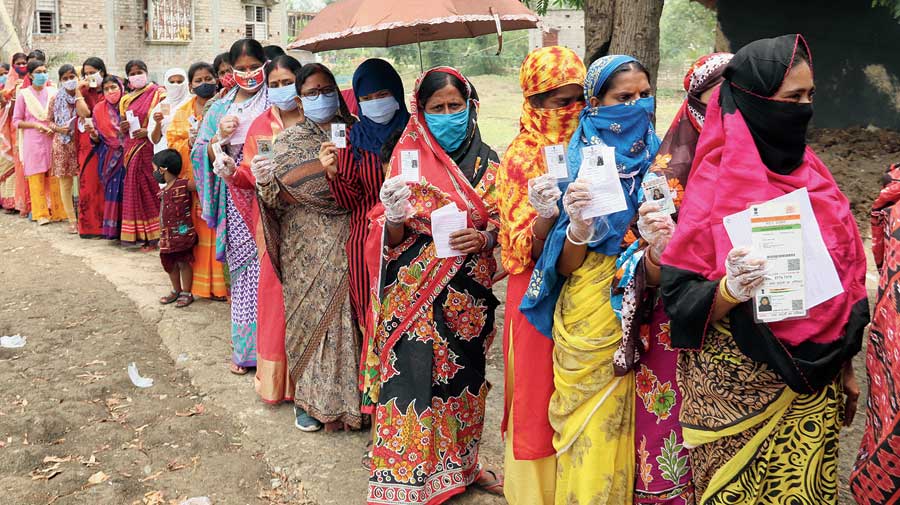 Voter turnout on Thursday — in the sixth phase of the protracted eight-phase Bengal Assembly elections — was over 79 per cent till 5pm.

But a closer look at the district-level voter turnout figures indicated a reluctance among many to go out and vote in the urban areas of North 24-Parganas, which has seen an alarming spike in the number of Covid infections in the last few days.

Next to Calcutta, North 24-Parganas has become the Covid hotspot in the state.

The overall polling percentage in the 17 Assembly segments in North 24-Parganas that voted on Thursday had been 75.94 per cent till 5pm.

Voters at a booth in East Burdwan on Thursday.
Munshi Muklesur Rahaman

Assembly segment-wise polling percentage revealed that the areas with a spurt in Covid-19 cases had lower voter turnout on Thursday than usual.

For example, till 5pm, the turnout percentage in some of the constituencies like Bhatpara, Barrackpore, Noapara, Jagatdal, Khardah and Dum Dum North were 65, 67 70, 74, 77.06 and 76.3 per cent, respectively.

“The voter turnout in these Assembly segments is unlikely to improve at the end of the day as reports suggest that there were no long queues in front of the booths even after 5pm. It is clear that people in these areas, which are close to Calcutta, were afraid of going out to cast their votes in the backdrop of the raging pandemic,” said a source.

The fear factor, however, was less visible in rural areas as Assembly segments like Gaighata recorded 82 per cent polling till 5pm.

Similarly, Baduria and Habra Assembly segments recorded 81 per cent and 82.58 per cent voter turnout till 5pm.

“All these Assembly segments fall in the rural areas of the district and it appears that the turnout would surpass the average polling percentage of 82 per cent by the end of the day. This gives a clear hint that people in urban areas of the district were more fearful of going to the polling stations amid the spurt in Covid cases,” said a source.

Another factor has drawn attention of the sources in the Election Commission of India is that turnout at the minority -dominated Assembly segments was higher than average this time.

“For example, Amdanga, a minority-dominated Assembly segment, located near Barrackpore, has recorded 83.78 per cent voter turnout till 5pm, which was the highest in the district,” said a source.

The trend was also noticed in the previous phase of polls where 16 Assembly segments of the district had gone for polls on April 16.

In constituencies such as Degnanga, Haroa and Basirhat North — all minority-dominated — turnout was more than 88 per cent.

Though there was a clear rural-urban divide in the voter turnout in North 24-Parganas on Thursday, the picture was different in the other districts that voted — Nadia, East Burdwan and North Dinajpur.

All these recorded high voter turnout, irrespective of whether they were urban and rural parts of the districts.

While East Burdwan reported 82.15 per cent voter turnout till 5pm, in the case of Nadia and North Dinajpur, the percentages were 82.67 and 77.76, respectively.

Sources in the Election Commission said that the trend witnessed in urban North 24-Parganas posed a challenge before them ahead of the next two phases where the polls would be held in Calcutta’s Assembly seats.

“Calcutta is the place where the maximum number of positive cases are reported every day. If the polling

percentage falls here, it would also indicate a failure of the Election Commission as it would mean that the poll panel failed to make enough arrangements to assure the common people to come out and vote safely,” said a source.

Stadiums and halls for Covid units