The saffron party also lodged a complaint about the attack on the Diamond Harbour candidate Dipak Halder, a Trinamul turncoat, on Friday 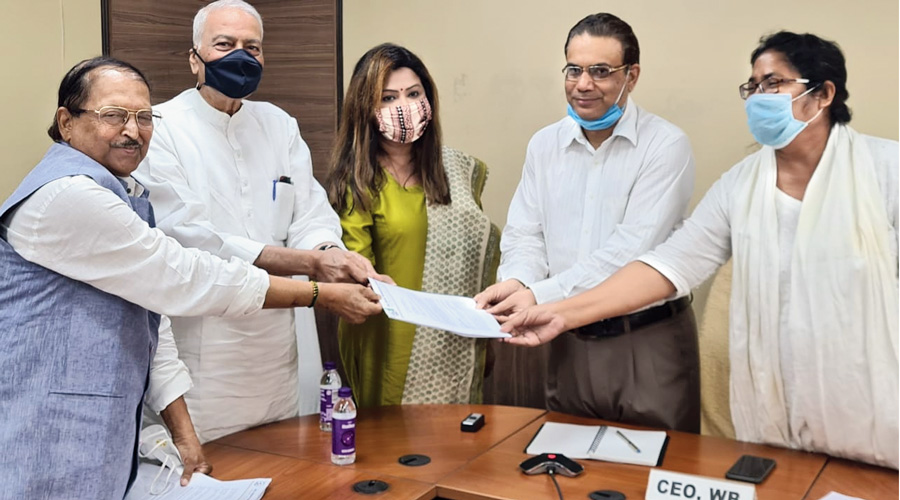 The Trinamul Congress and the BJP called on the chief electoral officer on Friday and lodged complaints of electoral misconduct against each other in the second phase of the Assembly polls.

A team of Trinamul leaders, including minister Subrata Mukherjee, former Union minister Yashwant Sinha, Derek O’Brien, Dola Sen and Nayana Bandyopadhyay, met CEO Aariz Aftab to allege that central forces had acted at the behest of the BJP during the second phase of the polls on Thursday.

“I’ve seen polls in the past 50 years. However, never have I seen such an unashamed interference by the Union government in the poll process,” Mukherjee told journalists after meeting the CEO.

The Trinamul leaders also alleged that the first two phases of the Bengal polls had not been free and fair. They accused the central forces deputed to maintain law and order during the polls of influencing the electorate.

“The serious issue is…central forces should be deputed during polls. But as a candidate, sometimes I’ve also realised that central forces don’t act impartially during the polls…This time, when such people are in power at the Centre, for whom nothing is inappropriate, everything is appropriate, they can stoop to any levels to win the polls,” said Sinha, a former BJP member who recently joined Trinamul.

The delegation requested Aftab to ensure that the polls were conducted freely and peacefully in the coming phases.

A BJP delegation led by Sisir Bajoria and Tathagata Roy also called on the CEO. The BJP leaders said while chief minister Mamata Banerjee had the right to visit any booth in her constituency as a candidate, she violated electoral norms by stationing herself at one booth in Nandigram for nearly two hours.

“Booth no.7…suddenly Nandigram’s candidate Shri Mamata Banerjee came, she can go to any booth as a candidate, but she cannot sit on dharna on the premises…for almost two hours…she forgot that 144 was imposed…Section 144 went for a toss…when has a candidate sat on a dharna at a booth? This is not done…She came along with all her security personnel and slowed down the poll process. Nandigram is the only Assembly constituency of the 30 (which went to polls on Thursday) where the poll percentage went down by 2 per cent,” Bajoria said.

He added that a delegation of the national BJP leaders would meet the top echelons of the Election Commission of India to lodge a complaint on the issue.

The BJP also lodged a complaint about the attack on the Diamond Harbour BJP candidate, Dipak Halder, a Trinamul turncoat, on Friday.

Representatives of the Sanjukta Morcha — which comprises the Left Front, Congress and the ISF — led by CPM leader Rabin Deb and Congress MP Pradip Bhattacharya also met the CEO. They accused Prime Minister Narendra Modi of influencing voters by holding public rallies on poll days. Mamata had made a similar accusation on Thursday.

“On March 27, during the first phase of the polls, PM Narendra Modi went to Bangladesh and addressed the people there. Though it was in a separate country, the programme was telecast in Bengal as well. Again on April 1, he addressed poll rallies in Joynagar and Uluberia. This is unacceptable and is a violation of electoral norms,” Deb said.

He added that the delegation had asked the CEO to ensure that the PM didn’t come for rallies in Bengal on voting days.