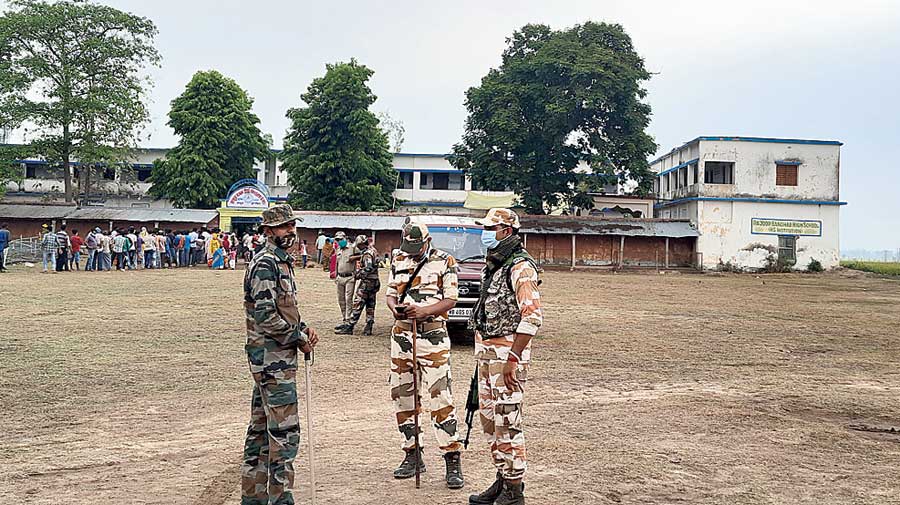 Anadi Ghosh, the BJP candidate from East Burdwan’s Ketugram, on Thursday accused the central force jawans of inaction when he was allegedly confined and heckled inside a polling station in his constituency.

In a first on the sixth phase of elections, the BJP apparently joined Trinamul in blaming the central forces.

Ghosh not only accused the central forces of being mute spectators to his plight, but also praised the state police — which the BJP in Bengal normally vilifies — for rescuing him from alleged Trinamul goons.

“It was a very sad experience for me, as the central force jawans did not come to my rescue even after my appeals. I called up the inspector-in-charge of Ketugram, Suman Chatterjee, who rescued me,” said BJP’s Ghosh.

Prior to the sixth phase, Trinamul lodged over 800 complaints against central forces, to the Election Commission as the BJP heaped praise on both the forces and the commission. Trinamul’s attacks intensified after the firing by central forces at Sitalkuchi on April 10 that killed four men.

Ghosh, a Trinamul turncoat, joined the BJP a few months ago and was nominated against his former party colleague and Trinamul MLA from Ketugram, Sheikh Shahanawaz.

The BJP candidate went to Khaspur village, where he involved in an argument with a group of Trinamul workers, who were allegedly within 100 metres of a booth.

“Our candidate entered the polling station in fear of an attack, after he was hurled abuses and threatened with physical harm. But when he again faced agitation by Trinamul workers inside the polling premises, the central forces did not come forward to help,” said a BJP worker with Ghosh.

BJP nominee Anadi Ghosh, who apparently got no help from them.
Snehamoy Chakraborty

Suman Chatterjee, the inspector-in-charge of Ketugram, said: “The situation became heated as the candidate started talking to voters. We rescued him.”

Many Trinamul leaders in East Burdwan expressed surprise to hear of Ghosh’s complaint. “I am happy at least one BJP candidate faced the problems with central forces,” said Shahanawaz, Trinamul nominee from Ketugram and MLA.

“Central forces were standing idle when Trinamul men beat us up with sticks and rods. The goons of Trinamul hurled brickbats at state police, who managed to flee but the central forces did not react,” alleged  Mondal who got cuts in his ears and back.

In Rujur village of the same seat, six crude bombs were hurled allegedly by Trinamul workers to drive away voters. A woman, Mandira Majhi, with her six-month-old, who was allegedly pushed into a drain for voting for the BJP, said the central forces did not help her.

Allegations against central forces for lathi-charge came from Swarupnagar and Bongaon in North 24-Parganas.