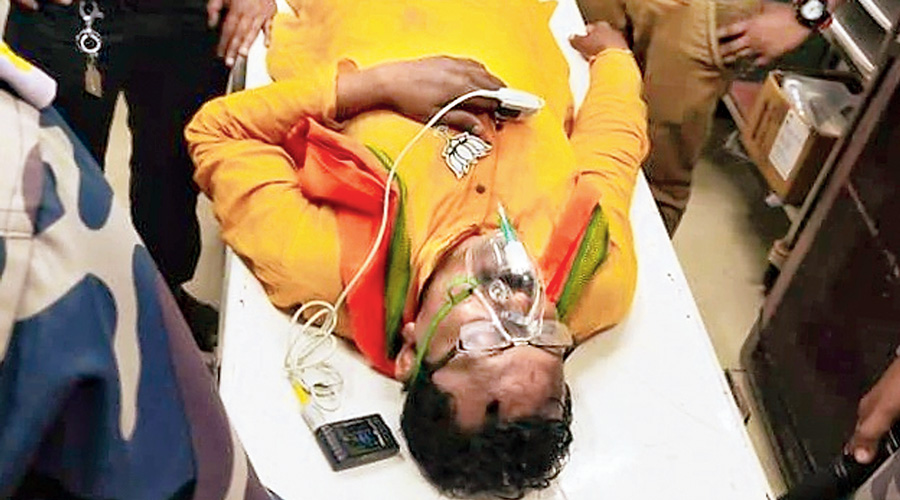 Dipak Halder, the Diamond Harbour BJP candidate, suffered multiple injuries when he was attacked by suspected Trinamul Congress supporters while campaigning in his Assembly segment in South 24-Parganas district on Friday.

Six BJP workers were also injured in the attack when they tried to save Halder at Haridevpur in the Parulia coastal area.

All the victims, including Halder, have been admitted to Diamond Harbour Medical College and Hospital.

Police and local sources said the attack had occurred around 9.30am, a little after Halder had begun campaigning. As Halder was moving around at Haridevpur asking people to vote for him, a group of alleged Trinamul supporters armed with bamboo sticks and iron rods arrived and beat up the BJP candidate and his supporters. The personal security men of Halder were also hit with stones.

“It was a planned attack by Trinamul as the ruling party is fast losing its support base. They are trying to unleash terror ahead of the polls. People of Diamond Harbour will give a befitting reply to them,” said Halder who suffered injuries to the head, back and chest.

Angry over the alleged attack, BJP supporters blocked NH117 at several places, while the party’s state leadership lodged a complaint with the Election Commission blaming Trinamul for the attack. BJP workers jostled with the police when they tried to lift the blockade. The police resorted to a baton charge to break up the protesters.

The EC has sought a report on the incident from the South 24-Parganas district administration.

A senior officer of Diamond Harbour police district said: “We have received a complaint about an attack on the BJP candidate and are looking into it.”

Trinamul has denied the charge.

Trinamul’s Diamond Harbour block president Arumoy Gayen said: “We have no connection with the incident. It is a ploy by the BJP candidate to get publicity and malign Trinamul by enacting a fake attack.”

The Diamond Harbour mandal committee president of the BJP, Surajit Halder, said: “Trinamul has been using goons to unleash terror among BJP workers so that we leave the battle ground for them. But that will not happen and the situation will change after May 2 as the BJP will win the polls.”