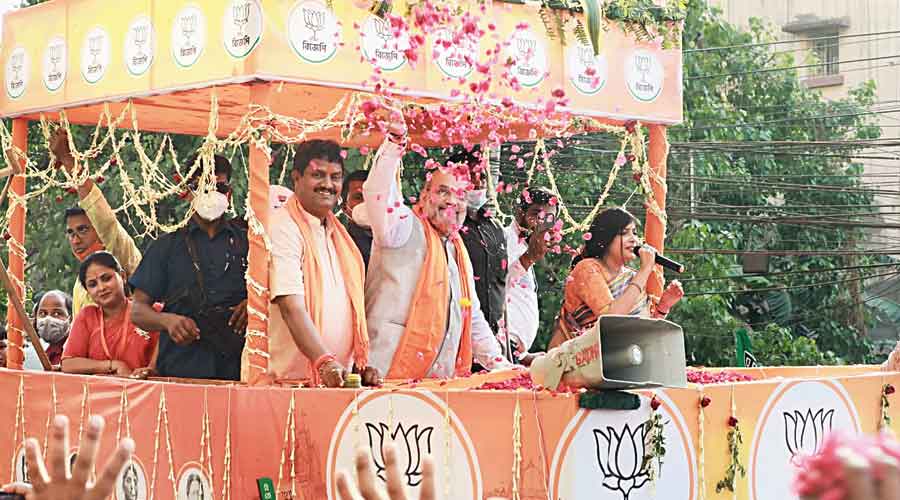 Union Home Minister Amit Shah held a series of colourful road shows in three districts of south Bengal on Wednesday, promising rapid industrialisation if BJP is voted to power and predicted a massive victory for his party.

Shah claimed the BJP will win between 63 to 68 seats out of 91 constituencies for which elections have been held in the first three phases of the eight-phase West Bengal assembly elections.

Asserting that Mamata Banerjees departure is assured, he said at Mallick Fatak in Howrah, "She is such a big leader, so her departure should also be with a big margin." The home minister also promised to wipe out hooliganism and political violence if his party came to power.

The first of the road shows of the day was at Singur, once the hotspot of the anti-land acquisition movement, where he moved from Dulepara till near Singur police station. He was campaigning for Rabindranath Bhattacharya, the outgoing Singur MLA and a Trinamul turncoat.

The symbolism of the home minister holding a road show in Singur, three days after Prime Minister Narendra Modi held a rally there and alleged the "obstructionist mindset" of Chief Minister Mamata Banerjee deprived West Bengal of industries and jobs, was clear--the BJP wants to corner her over the states dwindling industrial base and lack of jobs.

He then joined a road show at Domjur, campaigning for another Trinamul turncoat Rajib Banerjee. The rally started at Jagadishpur Market and ended at Kona crossing. Shah then went to Howrah Central (in the picture) and campaigned for Sanjay Singh. Bally’s BJP candidate and Trinamul turncoat Baishali Dalmiya was present at this road show.

In between, Shah had lunch at the residence of Shishir Sana, a van puller at Domjur. The last road show attended by Shah was at Behala East in Calcutta

Speaking to reporters during the show, Shah said Singur, which has been shunned by industry since the 2006 agitation, will be developed by the next BJP government in the state.

"We will develop the area by setting up industries and a Rs 500 crore intervention fund has been announced for potatoes, for which the area is known, in our Sankalp Patra (manifesto)," he said.

Shah said, after winning the elections, the BJP government will ensure that small, medium and large industries are set up in Singur, situated beside the national highway connecting Calcutta and New Delhi.

"We will pursue politics of development, dialogue and cooperation, instead of confrontation," he said.

"Bharatiya Janata Party estimates that it will surely win 63 to 68 seats in the first three phases of elections and gain a huge lead over the TMC, Left and the Congress," he said.

He said he welcomed TMC supremo Mamata Banerjee invocation of Hindu Gods and Goddesses, and recitation of Chandi Path (hymns to Goddess Durga) at public meetings, but quipped it was "too late for her".

Banerjee, often accused by Prime Minister Narendra Modi and other BJP leaders of minority appeasement, has been regularly chanting hymns and asserting her Hindu identity to keep the majority community in good humour.

The road show meandered through the roads of Singur town for nearly an hour from Dulepara More to Singur police station, as colourful posters, BJP flags and green and saffron balloons dotted the route.

Chants of Jai Shri Ram and slogans demanding industrialisation and jobs pervaded the air as the procession crawled through streets.

Referring to the Singur movement of 2006-08 that forced Tata Motors to move out its proposed small car Nanos mother production unit from the area, Modi had told an election meeting that the TMC used the place for political purpose and then left the people to fend for themselves. Singur, a small town in Hooghly district, has an old connection between Banerjee and Modi.

The scene of an aggressive movement led by Banerjee against forcible land acquisition by the then Left Front government for the Nano project, Singur, along with Nandigram, had catapulted the street fighter TMC leader to power in West Bengal in 2011.

The sustained, and often violent, protests by the local farming community led by Banerjee forced the Tatas to move out of Singur.

A cryptic Suswagatam SMS from Modi, then the Gujarat chief minister, to Ratan Tata, the group chairman, is said to have clinched the deal in Gujarats favour and led to the relocation of the project to Sanand near Ahmedabad.

Many considered it as West Bengals loss and Gujarats gain.

Shah also held rallies at Domjur, Howrah Madhya and Behala East constituencies, all of which will go to polls in the fourth phase on April 10, with party candidates in tow.

Addressing the crowd at Mallick Fatak in central Howrah, Shah said that a BJP government in the state will make its border security strong enough to ensure that no one can cross over into it illegally.

"Under Modijis leadership, we have to reform the education system, strengthen infrastructure, provide work to the unemployed and promote industry," he said.