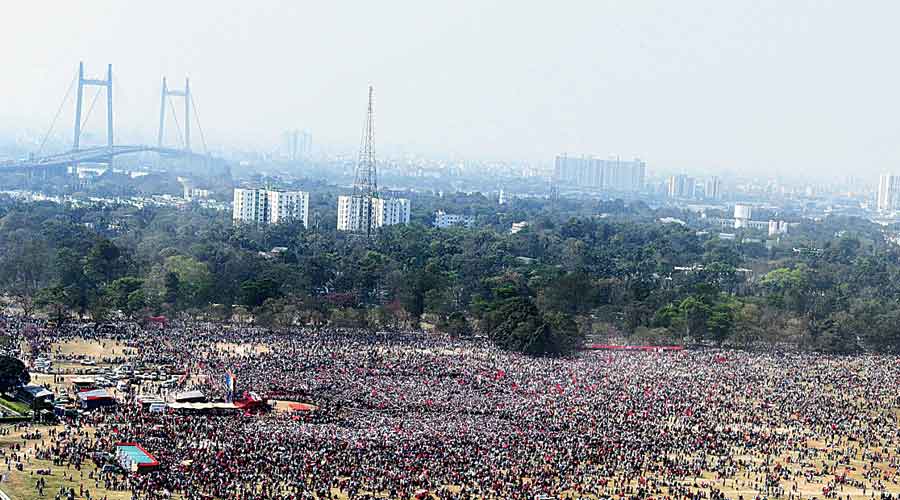 Bengal on Sunday witnessed the injection of a new dimension into its politics with the formal induction of Abbas Siddiqui, a Furfura Sharif pirzada, who took centre-stage at the Brigade rally of the Left and the Congress with a pledge to uproot both the Trinamul Congress and the BJP.

The cleric’s formal entry into mainstream politics — a rarity in Bengal till now — added an element that even sections within both the “secular” allies were uncomfortable with while it drew derision from Trinamul as well as the BJP.

“For decades, we had successfully asked crores of Bengal’s minority voters to support a Marxist party and its allies, shunning identity-based politics. Even though many of them had turned away from us in favour of Mamata Banerjee, we had not compromised ideologically,” said an Alimuddin Street insider.

“But with the inclusion of Siddiqui’s so-called Indian Secular Front, giving the fledgling outfit 30 seats from the Left quota in the alliance, we will formally be asking the same voters to make a sea-change in their mindset. Will that be reversible in the foreseeable future? We don’t know,” he added.

The answers to other questions like the impact of Siddiqui on the upcoming polls or the future of the political discourse in Bengal also remained hazy. Siddiqui supports the cause of the marginalised, including the Dalits, but his party is still seen as deriving its core strength from the minority community.

The images of the young Siddiqui emerging as the top draw at Brigade, upstaging Left and Congress stalwarts, his claim that he could have doubled the mega turnout on the ground had he been given more time and his vows to keep the BJP out and teach Mamata a lesson were uncommon features on the Bengal political firmament.

Siddiqui’s chest-thumping assertions of being there for bhagidari (the right of a stakeholder) and not for toshon (appeasement) also stood out.

In private, an influential section of the Congress, which is having a tough time negotiating with Siddiqui who has been seeking seats for his party in the Congress strongholds in Malda, Murshidabad and North 24-Parganas, also articulated reservations about the Siddiqui phenomenon.

“It is being unfairly said that the Congress’s reservations are solely on account of the conflict of interest in districts with a substantial minority population in central Bengal (traditionally, Congress bastions) from which Siddiqui wants seats. There are bigger, wider considerations for the longer term that cannot easily be ignored,” said a source close to state president Adhir Ranjan Chowdhury.

On the dais, a brief episode of an apparent expression of displeasure by Chowdhury — as Siddiqui walked in to thundering applause and frenzied waving of the countless ISF flags in the crowd — laid bare in full public view the Congress’s discomfort with the equation.

“There is also the key question of how this might end up helping the BJP in furthering its agenda of polarisation,” the source added.

Mamata’s party, which has conspicuously not been getting in the way of the Left-Congress alliance, expressed disappointment.

Trinamul’s septuagenarian minister Subrata Mukherjee said that prior to Sunday afternoon, he had many reservations about the Left and the Congress (his former party) but never did he harbour any doubt about their secular credentials.

“That was until this afternoon. There has clearly been an ideological compromise for the sake of immediate electoral concerns. This was not expected of either. It is not a heartening sign of things to come,” said Mukherjee, who has been in Bengal’s electoral politics for over five decades.

The BJP is not entirely displeased with the Siddiqui element. If Siddiqui’s party eats into Mamata’s minority support base, it works to the BJP’s advantage.

The BJP said the “fake” secular label of the Left and the Congress had been exposed. “They are unmasking themselves before the people ahead of the elections,” said the BJP’s state chief spokesperson, Samik Bhattacharya. “This goes to show how, despite their lofty claims, they are actually believers of identity-based politics,” he added.