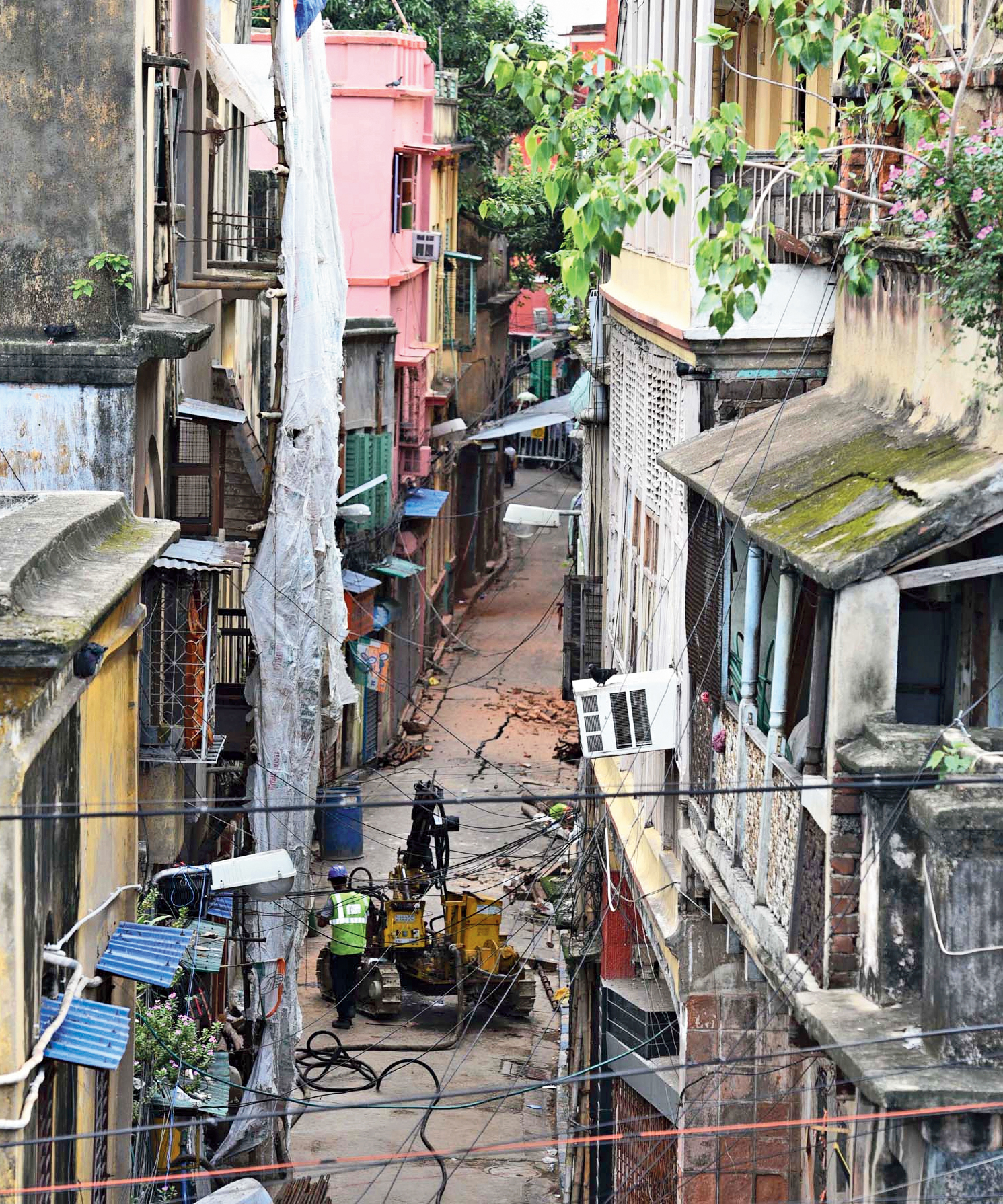 The seal of a vital component of a tunnel-boring machine of East-West Metro gave way because of water pressure, leading to flooding of the tunnel in Bowbazar, engineers involved in the project said on Monday.

The seal of the tail skin brush went off while the machine was boring through sand aquifer that contained a large amount of water. The tail skin brush, placed at the rear of the boring machine, prevents water seepage.

“As the tunnel-boring machine moves forward, concrete rings are placed along the tunnel. The diameter of the rings is smaller than that of the tunnel and the gap is filled with grout — a mixture of water, cement and sand,” said an engineer.

“Apart from water seepage, the tail skin brush, made of steel and fibre, prevents the grout from spilling into the tunnel-boring machine.”

The machine that hit the sand acquifer — it was boring the tunnel through which Howrah Maidan-bound trains will run — have three such brushes.

“The seal of the tail skin brush gave way and water flooded through it. We have to find out how it happened,” said a senior official of ITD-ITD CEM, the joint venture construction company that is building 2.45km of twin tunnels between Esplanade and Sealdah.

The company had also built the Calcutta airport’s new terminal building, which is notorious for its leaking roof and aerobridges. Airport officials blame design flaws for the leaks.

Help is now being sought from engineers from agencies that have worked on other parts of the East-West project to contain the damage. Boring of the tunnel has been stalled and it is not clear when work will resume.

Contract for the 16.5km East-West project, which will connect Howrah Maidan to Sector V, was awarded to various agencies. Construction company Afcons has built the tunnels between Howrah Maidan and Esplanade.

Kolkata Metro Rail Corporation (KMRC), the implementing agency of the project, said the tunnel-boring machine had passed through a 250m-stretch of sand aquifer before the seal of the brush collapsed.

“The sand aquifer, from which water gushed, was 600 metre in length and the machine had crossed about 250 metre of it. It is possible that throughout this stretch the seal of the tail skin brush was under tremendous pressure from water outside. It finally gave way on Saturday evening,” said a KMRC official.

“Flooding of the tunnel was accompanied by a huge soil settlement and things went out of control.”

The settlement was so severe that the safety measures taken to protect buildings in the area failed. “Steel props had been erected to support the roofs and other structures of the old buildings, while grouting was done to reinforce the base. But many buildings still developed cracks,” the official said.

Engineers said the tail skin brush needed to be replaced at certain intervals. ITD-ITD CEM, sources said, had ordered replacement of the brushes but the mishap struck before new brushes could be installed.

KMRC officials, however, denied that the brushes were in bad shape. “The brushes cannot be replaced inside the tunnel. Lot of space is required to access the brushes and take them out. It can only be done at a station. Also, the brushes are usually replaced after the machine travels every 2km,” said a KMRC official.

In this case, the machine has burrowed the tunnel for 1.6km from Esplanade.

Engineers are also raising questions on whether safety surveys of old buildings, which are collapsing or have developed cracks, were done thoroughly.

“Each pillar and wall have to be checked and assessed. Safety measures are taken based on a detailed survey,” an engineer said.

KMRC officials, however, said thorough surveys were conducted, like it was done in Burrabazar before the twin tunnels were dug under it. Like Burrabazar, Bowbazar, too, has hundreds of old buildings, many of which are dilapidated.

A senior official said the speed of the tunnel-boring machine was about 20-25m a day till it was under SN Banerjee Road.

The moment it took a left turn and went under Nirmal Chunder Street, the speed was reduced to 10m a day.

But that failed to prevent the mishap.