Students across the world unite to combat the evil 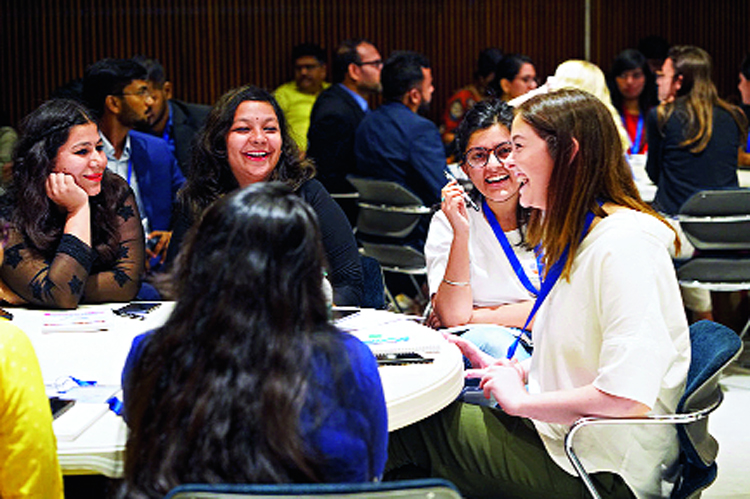 Participants in the conclave on human trafficking on Wednesday.
The Telegraph picture
Jhinuk Mazumdar   |   Calcutta   |   Published 14.03.19, 10:03 AM

How to raise awareness on campus against human trafficking? How to volunteer and partner with organisations to become a voice against trafficking? These and more such questions will be answered at an anti-trafficking conclave in the city over the next few days.

College and university students from the US, Nepal, Bangladesh and India have come together at the conclave to combat the “global and human rights problem”.

The US consulate general in Calcutta and the New Delhi- based NGO Shakti Vahini are hosting the Anti-Trafficking-in-Persons Youth Champions Conclave at the American Center from March 13 to 16.

“The idea is to get university students in the US who have been active on the anti-trafficking issue to interact with university students from India, Nepal and Bangladesh so that they can talk about different ways of combating the issue using their university as a platform,” Vanessa Bouche, associate professor, political science, at Texas Christian University, told Metro.

Bouche takes classes at the university on human trafficking. “Students from different countries of the globe can share with each other information and ideate on different ways in which they can mobilise their campuses and think about different ways to use their resources — both time and talent — to volunteer in the communities,” she said.

US consul general Patti Hoffman said the US is committed to working together with international partners to end trafficking. “It is not enough to denounce this horrific assault on human dignity; we must actively work to prevent and end this barbaric exploitation of innocent survivors.”

Bouche and her group of eight students will conduct workshops over the next four days to inspire “young people to take up the mantle of doing human rights work”.

“It is not about sugar-coating it and saying it’s easy but telling them that this kind of work is going to be hard, lonely and sad and educating them on the correct way to think about the problem because there are a lot of misconceptions, misperceptions and misunderstandings,” she said.

Though the biggest thrust of Bouche’s classes in the US is on the idea of raising awareness, she has had instances of privileged and affluent students being able to escape a trap set for them.