While keeping the university's decision to rusticate three students in abeyance, the court on Wednesday termed the varsity’s move as 'excessive and disproportionate' 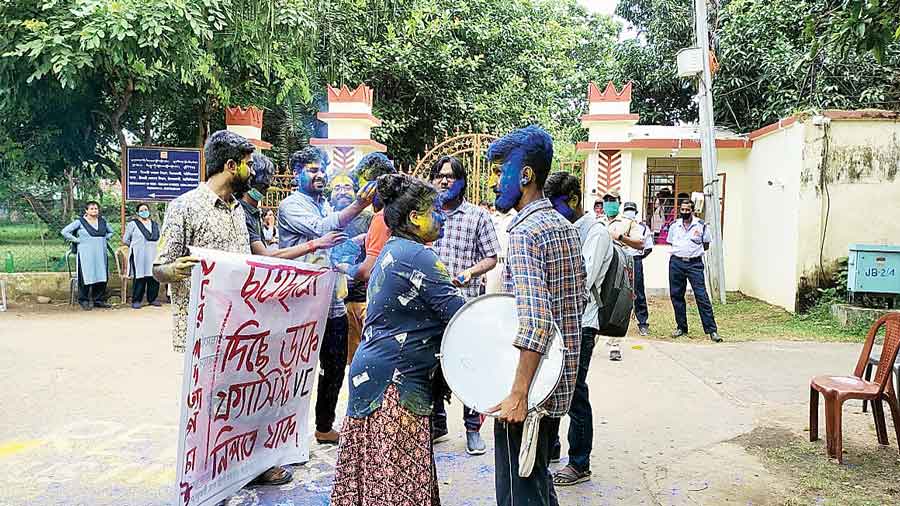 Students and teachers of Visva-Bharati celebrated Calcutta High Court’s interim stay on the varsity’s decision to rusticate three protesting students by breaking their hunger strike and smearing each other with colours and distributing sweets in Santiniketan on Wednesday.

While keeping the varsity’ decision to rusticate the three students — Somnath Sow, Falguni Pan and Rupa Chakraborty — in abeyance, the court on Wednesday termed the varsity’s move as “excessive and disproportionate”.

After the news of the high court’s interim order reached Santiniketan on Wednesday, Rupa and suspended economics department professor Sudipta Bhattacharya broke their hunger strike by drinking fruit juice.
After offering fruit juice to Bhattacharya and Rupa to end the fast they had begun on September 5 afternoon, the students brought a few bags of abir and smeared themselves with colours to celebrate what they termed as their “victory”.

A group of students also went to the gate of Purbita, which is the official residence of vice-chancellor Bidyut Chakrabarty, and offered sweets to those present there but it was refused.

Reacting to the ruling, SFI leader and one of the rusticated students Somnath Sow said: “The (interim) order of Calcutta High Court has proved that we are on the right track. It also proved that the punishment was vindictive in nature as the court held it excessive. Now we want to see when the VC implements the order.”

Asked about the court’s order directing students or anyone on their behalf from holding protests “in or beyond” the campus, a protester said they would temporarily withdraw their movement but would decide on their future course of action depending on how the varsity authorities react to the interim order.

While putting the varsity’s rustication decision on abeyance, the court asked Visva-Bharati to allow the three students to resume academic activities.

“We are yet to dismantle our tent as we are waiting for Visva-Bharati’s order. If the varsity does not comply with the order, we will continue with our movement,” the protesting student added.

After the court issued its interim order, the officiating registrar Ashok Mahato and two other officials attempted to go to the VC’s residence in a car but was stopped by the students.

“The officials were on their way to meet the VC to discuss the further course of action,” said a varsity official. Some insiders in the Visva-Bharati said the varsity would implement the court’s order.

"Officiating register Asok Mahato has sent the court’s order to proctor Shankar Majumder to take action and implement it. An order to that effect might be issued soon," said a varsity official.

Visva-Bharati’s officiating public relations officer Anirban Sircar did not reply to a text message when he was asked about varsity’s course of action after the court’s order.

Apart from the students, the teachers, old-timers and traders of Santiniketan who formed a joint forum to intensify the movement said that they were happy with the court order but they wanted to see the VC removed for his partisan and vindictive decisions. “We are happy with the order but there are many  wrongdoings of the VC and he should be punished,” said Manisha Banerjee, an alumni and assistant secretary of Alapini Mahila Samity. The samity is an association of women in Santiniketan and dates back to the time of Rabindranath Tagore.

Aminul Huda, an office-bearer of handicrafts artisans’ society in Santiniketan, said: “We welcome the order but our movement against the VC will go on.”