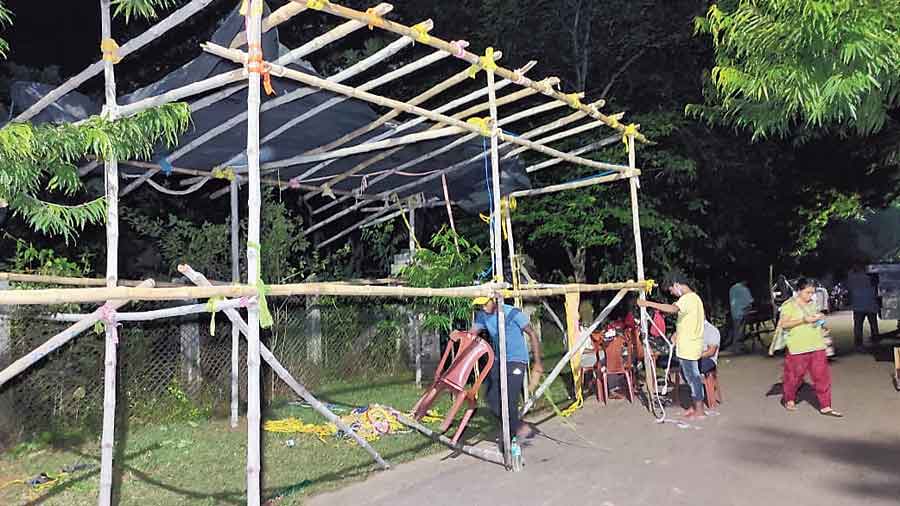 Students erect a new tent to continue their protest against the VC on Friday.
Picture by Amarnath Dutta
Snehamoy Chakraborty   |   Santiniketan   |   Published 04.09.21, 01:01 AM

A large team of Birbhum district police and civil administration reached Visva-Bharati on Friday afternoon and swung into action to carry out an order of Calcutta High Court which wanted vice-chancellor Bidyut Chakrabarty’s office and residence to be cleared of the agitating students.

“We carried out all Calcutta High Court orders in the presence of Visva-Bharati officials. The protesters were removed from outside the house of the VC. All posters and banners were removed. An unclaimed lock that was put on the gate of the VC’s residence was broken to ensure his free movements. A pandal that the students had put up within 50 meters of the VC’s residence was also dismantled,” said Abhishek Ray, the sub-divisional police officer of Bolpur.

Within half an hour of the high court order, a team of three armed constables was deployed in front of Purbita — the official residence of the VC. Apart from the SDPO, Bolpur subdivisional officer Ayan Nath also came, along with senior officers, to monitor the situation around 3.30pm.

The police first broke an unclaimed lock to open the new gate of Purbita and cleared a few tins placed to guard the CCTV cameras. Festoons or posters were taken off the wall and the gate of Purbita within a few minutes.

The police directed the students to clear the area around the VC’s residence. “The university officials’ presence on the spot confirmed that they were satisfied with the action following the court order,” said a district official.

Although the order came as a blow to the protesting students, they didn’t waste any time in dismantling the pandal, which was set up as part of an agitation against VC Chakrabarty.

The VC has had several run-ins with the student and teaching and non-teaching community of the varsity since he took over the reins of the central university around two years ago.

“We have full respect and faith in the court and we will follow the order.... But we would carry on with our protest against the VC’s vindictive approach towards students and his attempts at saffronising the institution,” said Somnath Sow, a protesting student, who added that they

had co-operated with the police in carrying out the court order.

In the evening, the students set up a new pandal in front of one of the guest houses of the varsity — keeping a safe distance from VC’s residence — and said they would continue the peaceful dharna to press for their demand.

“We followed the order and set up a new tent keeping a distance of more than 50 meters from the VC’s residence. The court had specified a few specific places from where we would not be allowed to conduct the agitation. We are not gheraoing anyone and are just demonstrating here,” said Sow.

The demonstration was launched last week to protest the rustication of three students by the varsity authorities.

A section of Visva-Bharati officials said the police had promised during the action that there would be no gathering of agitators on the campus.

Visva-Bharati public relations officer Anirban Sarkar did not reply to a message from this newspaper which asked him whether the authorities were satisfied with the action by the police and the administration following the court order.

The Visva-Bharati authorities on Friday night said they had resumed the processes of student admissions and exam result publications. The varsity had last week put on hold the processes.