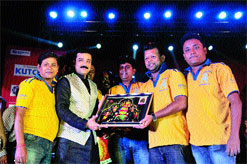 If it were possible, the entire para would have crammed into the Vidya Mandir auditorium on Thursday evening to pick up Santoshpur Lake Pally’s Model Puja trophy.

Only 60 made it to the function, but they made sure the rest were there in spirit.

“The whole neighbourhood wanted to come,” a face in the contingent said, moments after emerging from a chartered bus.

The words “Santoshpur Lake Pally” on his T-shirt pocket announced his pride on being chosen to be there, representing the Model Puja winner in the 10th edition of CESC The Telegraph True Spirit Puja, held in association with Kutchina.

“We have been improving our visitor-friendly features since 2008, when we started drawing big crowds,” puja committee member Sandeep Banerjee told Metro.

Like a true veteran, Santoshpur Lake Pally now provides guidance to those who seek tips on how to organise a safe, socially responsible celebration.

Inside the auditorium, another group — Mukundapur Sarbojanin — was waiting to take the stage to collect a Two Star trophy.

When their turn came, cheering for them were the champions. “Tali de. Erao amader para (Applaud them. They are from our area),” Mainak Ghosh of Lake Pally exhorted his neighbours in the true spirit of solidarity.

Tolly star Prosenjit, who had judged the final round of TSP 2013 and presented some of the trophies, was all praise for the crowd-control abilities of the pujas he visited.

“Because of security reasons, I hardly ever get a chance to go pandal-hopping myself. I am thankful to TSP for giving me a well-protected tour,” the actor said.

Standing next to the elderly man who has been shouldering puja responsibilities for 70 years, the little volunteer declared how she enjoyed working at the pandal. “One night, I saw an old aunty limping. I took her out of the queue to a side entrance,” she recalled.

“The judges liked our ambience. We had made the area a no-smoking zone, denying even our members who smoke the opportunity to light up,” general secretary Bachchu Ranjan Das said.

Picking up a Three Star trophy from Mukti Gupta, managing director of the Mukti Group, joint secretary Anupam Das said: “This year, we managed to strike the bullseye in both aesthetic excellence and visitor comfort.”

Kidderpore Milan Sangha, which runs a school for 100 destitute kids, picked up the Puja That Cares trophy. The women of 66 Pally were busy with Kali Puja preparations, so only one of them could turn up to collect the Kutchina She award. “During Durga Puja, the role of women revolves around the rituals but for Kali Puja we collect subscriptions, too,” smiled Sraboni Dewanjea, the lone lady in the group that took home the award for a pandal saluting the power of women.

The musical part of the awards night saw singer Raghav pay a tribute to Manna Dey at the audience’s request and ending with the ICC World Cup theme song.