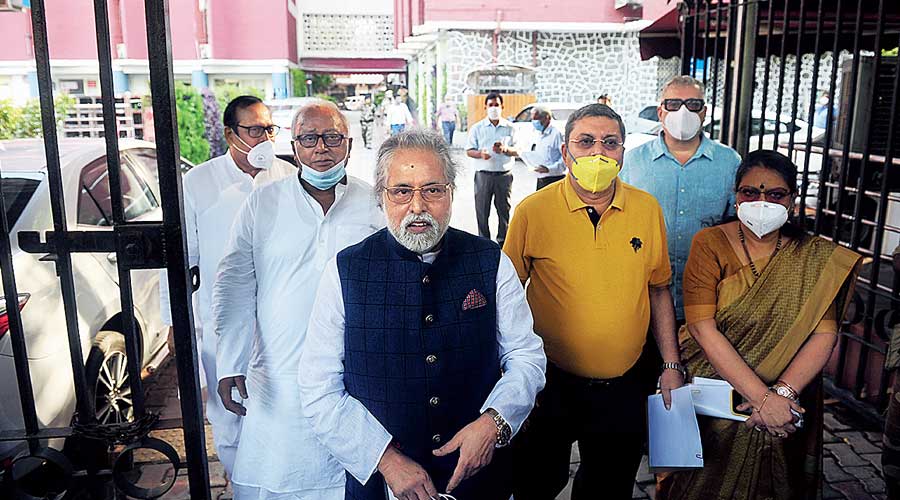 The Trinamul Congress on Thursday said if the Election Commission of India could hold eight-phase Bengal polls when the positive confirmation rate reached 33 per cent by Phase 8, there was no ground to withhold the pending Assembly bypolls when that rate came down to 1.5 per cent.

A delegation of six Trinamul MPs urged the commission’s full bench to declare the Bengal bypolls at once.

“In April 2021, during which time polls were conducted in eights phases spread across the month, there was a steep rise in daily cases of Covid-19 in West Bengal. From the middle of April 2021, at the peak of elections, the daily cases rose from approximately 6,000 cases daily to 17,000 cases,” it wrote in its memorandum to the commission.

“Despite the rise in Covid-19 cases and our repeated requests, the remaining phases of the polls were not clubbed together, as the ECI concluded that it was safe to conduct elections. The number of cases is at least 17 times lower now with fewer than 831 cases reported till July 14, 2021,” it added.

The commission has not responded to queries on the meeting.

On Thursday, Mamata said chief secretary H.K. Dwivedi had already informed the commission formally of the state’s willingness and preparedness for the conduct of not only the bypolls to two Rajya Sabha seats but also to the seven Assembly segments.

“Because there is no contiguity in the case of these seven seats, isolated seats…. There are many areas across the state with zero new cases. For instance, Bhowanipore, I was going through a Calcutta Municipal Corporation report… there are zero new infections in many wards. Arrey baba, here, in those seven constituencies, there is nothing at all. I was seeing yesterday, zero, zero, zero, shawb!” said Mamata.

On Thursday, MP Roy said all three commissioners, secretary-general Umesh Sinha, and deputy election commissioner Sudeep Jain — whom Trinamul had formally accused of bias towards the BJP — were present.

“The EC showed us district-wise charts of where all vacant constituencies in the country are…. They said they have a national outlook and can’t be state-specific, but assured us that the EC would hold elections according to its constitutional mandate after considering all pros and cons,” said Roy.

“The EC also said it would seek suggestions from parties on restrictions on campaigning in view of the pandemic. If asked, our party will respond appropriately. Our leader has been clear that elections should not endanger the lives of people,” he added.

The BJP replaced its chief minister in Uttarakhand, who sought to be elected in a by-poll from the state where the Assembly has less than a year of its term left. Section 151A of the Representation of the People Act, 1951, mandates the commission to fill vacancies in Parliament and the state legislatures through by-polls within six months from the date of their occurrence, provided that the remainder of the term of the new member is one year or more.

Mamata faces no such challenge, as the Bengal Assembly has its entire five-year term ahead.

Besides Mamata and Chattopadhyay, finance minister Amit Mitra, who did not contest the elections on account of health concerns, has to be elected to the Assembly. However, there have been doubts over whether Mitra would continue, as he no longer wants to be in active, electoral politics on account of his failing health.

The Bengal Assembly did, earlier this month, approve Mamata’s idea for reviving the Upper House, the Vidhan Parishad, abolished in 1969. But its revival – with the necessity of central approval – might not be possible within six months.

“Why they (the BJP) are scared? The provisions are very clear…. We are not asking for anything illegal,” said the Trinamul chief on Thursday, responding to queries on the BJP’s resistance to the by-polls.

“They know that they will lose every election. That is why. They are worried for that. We are not. They have already lost. Now there is no need for shouting. They should keep mum,” she added.