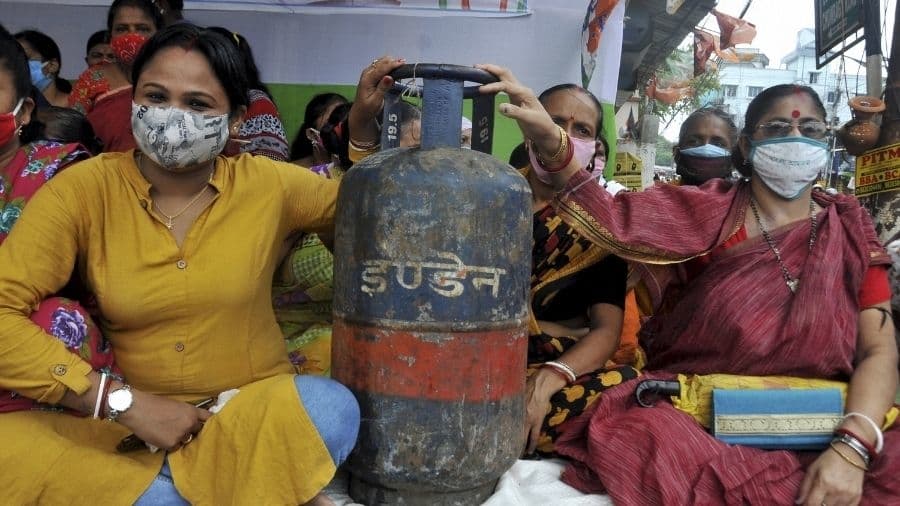 Trinamul Congress members protested across Bengal on Saturday against the spiralling fuel prices that are causing hardships for the common people amid the Covid-19 pandemic.

Petrol is retailing at over Rs 101 per litre and diesel at more than Rs 92 in Bengal, while domestic LPG touched Rs 861 per cylinder.

The protests were held in Dum Dum, Central Avenue and Chetla areas of Calcutta, Canning in South 24 Parganas, Chinsurah in Hooghly, and Malda, besides other parts of the state.

"Petroproduct prices were unregulated, allowing oil companies to raise prices to increase their profits so that their share prices also rise," he claimed.

"In turn, this will help the Centre to sell the state-run oil companies to foreign investors," he said.

Hitting out at the Centre, leader of the Congress in Lok Sabha Adhir Chowdhury said his party has been demanding rollback of taxes to bring down the prices of petroleum products to ease the burden on the people.

"The Bengal government should also consider the reduction of tax on petroleum products," he said, adding that Chief Minister Mamata Banerjee came to power with a huge mandate and should review this.

State BJP president Dilip Ghosh said that taking to the streets will not result in a reduction of the prices of petroleum products.