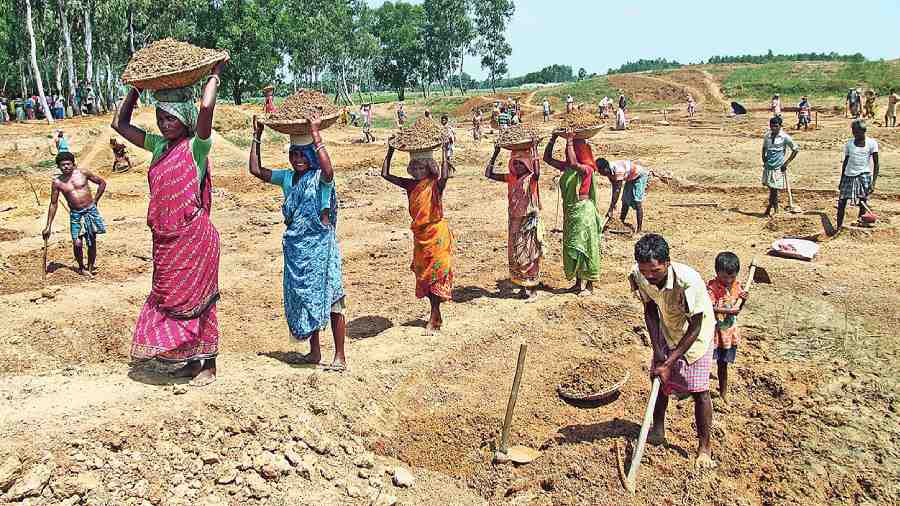 The Mamata Banerjee government is in a spot over how to clear wage dues of over Rs 3,000 crore under the 100-day rural employment scheme as the Centre is unlikely to meet the state’s demand for Rs 6,500 crore anytime soon.

The Narendra Modi government is holing the release of Rs 6,500 crore — Rs 3,000 crore for wages and Rs 3,500 crore for material costs — because of Nabanna’s alleged failure in giving satisfying replies to queries related to the expenditure.

“The fund is required immediately as we could not pay wages since December to those who had worked under the rural jobs scheme.… Non-payment of wages has led to some kind of unrest in rural areas. The Centre has asked some questions but the state is yet to send satisfactory replies,” said a senior government official.

After discussing with multiple sources, this correspondent learnt that the root of the problem is the government’s decision to create additional 3 crore mandays over and above the approved labour budget of 27 crore mandays which had been exhausted in November last year.

The state government thought of creating more mandays because of heavy demand for jobs in the backdrop of the Covid-19 pandemic.

Despite repeated attempts by this newspaper, no senior officer wanted to comment on why prior approval had not been sought.

Nabanna is saddled with another problem as it cannot start new schemes under the MGNREGA in the 2022-23 financial year as the Centre is yet to approve the labour budget of the ongoing fiscal.

According to sources, the Centre was yet to clear this year’s labour budget as the national-level monitoring teams that had visited Bengal last year raised several questions over fund utilisation and Nabanna is yet to give satisfactory answers.

“The monitoring teams have found that many projects which were shown to be completed had never been initiated. The monitoring teams also pointed out that Aadhaar cards of job-card holders were not seeded in the master roll in many cases. Besides, there were mismatches between the number of people shown to be engaged and the actual number of labourers in projects. The Centre had raised questions over these issues, but the state could not send satisfactory replies,” said a bureaucrat.

According to Trinamul Congress insiders, as the job scheme is one of the major sources of livelihood in the rural areas, the situation is getting tricky for the ruling party since the state could neither pay the due wages nor engage labourers in new schemes.

“It is hard to make people believe that the Centre did not clear dues. We are facing questions from common people. If the issue is not resolved soon, we might face trouble in next year’s panchayat polls,” said a Trinamul MLA from a south Bengal district.

State panchayat minister Pulak Roy refused to comment on the issue, saying the matter was being looked after by the chief minister.

A ruling party MLA said BJP legislators had lodged a series of complaints with the Centre over the 100-day job scheme, most of which were “fabricated”.

“This is the only reason why the Centre has put the release of funds on hold. If the funds are not released immediately, we will launch a campaign to let people know that the BJP-led Centre is denying them their dues,” said a Trinamul insider.

The chief minister, Mamata Banerjee, is trying to resolve the issue as early as possible considering the importance of giving jobs to rural people ahead of next year’s panchayat polls.

Mamata asked some departments to engage MGNREGA job card-holders as unskilled workers in their ongoing projects.

Senior bureaucrats said the panchayat department had to take initiatives to send proper replies to the questions raised by the Centre immediately to resolve the stalemate.