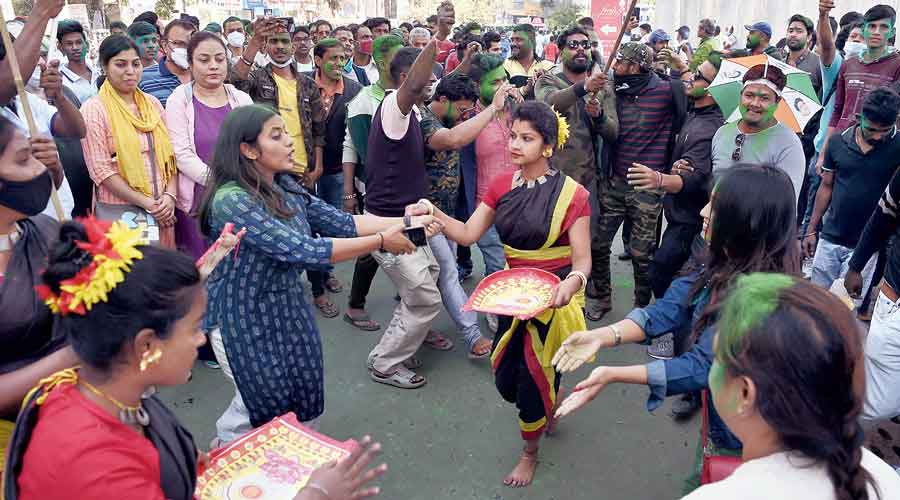 The Trinamul Congress registered a landslide victory at the Bidhannagar Municipal Corporation by bagging 39 out of 41 seats.

The scale of the victory — the Congress and an Independent won one seat each — prompted the Opposition to claim that the one-sided results vindicated their allegation of large-scale rigging and proxy voting by the ruling party.

The failure of the BJP and the Left Front to win even one seat became the talking point in political circles as the area had been a traditional Left stronghold and the BJP was on a tear in recent years.

“Trinamul had won 38 seats in the 2015 civic polls at Bidhannagar. After the massive win in the 2021 Assembly polls, nobody expected that the Opposition parties would be able to defeat Trinamul here. But the BJP and the Left Front drawing a blank is surprising indeed,” said a political observer.

According to the 2011 census, 95.29 per cent of 5 lakh residents of Bidhannagar are Hindus. So, Bidhannagar was one of the most favourable civic bodies in the state for the BJP because of its brand of politics, a BJP insider said.

Moreover, the number of non-Bengali voters in Bidhannagar — believed to be a strong vote bank of the BJP — is also relatively high compared to other civic bodies in the state.

“So, failure to win even one seat by the BJP at Salt Lake is really a setback for the saffron camp,” said the political observer.

“The BJP had become the second largest party in the 2021 Assembly polls with about 38.1 per cent votes across the state after Trinamul’s 47.9 per cent votes. If the saffron party comes down to the third position at many civic bodies within nine months, it clearly suggests the party is losing ground in the state,” said a political observer.

The Opposition parties, especially the BJP and the CPM, said a closer scrutiny of the outcome proved the extent to which the poll process had been vitiated and rolled out the examples of wards 1, 2, 3, 4 and 5, where Trinamul secured 85.9 per cent, 94.3 per cent, 95.9 per cent, 92.2 per cent and 86.4 per cent votes, respectively.

Not only these, there are at least 10-15 wards in the civic body where Trinamul secured more than 80 per cent votes. “Is this a real picture of democracy?” Asked a BJP leader.

A retired bureaucrat, who lives at Bidhannagar, said allegations of proxy voting at Bidhannagar couldn’t be wished away, but at the same time, the results tell a larger story about the lack of organisational might of Opposition parties.

“The verdict proves that the Opposition parties don’t have the organisational strength to prevent the ruling party cadres. Proxy voting at Bidhannagar is easy because a number of voters stay outside for jobs. Only their aged parents live here and that’s why it was easy to cast the votes of absentee voters,” explained the bureaucrat.